‘Hindutvavadi’ organizations come together and raise voice against the eighth displacement of Kashmiri Hindus and ‘Islamization’ of India !

Karnool (Andhra Pradesh) : Funds are provided in illegal manner to thousands of mosques erected all over India for which hundreds of temples are demolished. Fanatic jihadi organizations’ activities are growing very fast through such mosques and madrassas. As a result, fanaticism, jihadi mentality is spreading speedily in society. Violence in Kashmir, attacks on Amarnath pilgrimage and genocide of Hindus is the aftermath of all these things, stated Shri. Pramod Mutalik, the Founder-President of Sriram Sena. ‘Ek Bharat Abhiyan- Kashmir ki Oaar’ is a movement started by 160 ‘Hindutvavadi’ organizations from all over India; along with ‘Panun Kashmir’ for rehabilitation of Kashmiri Hindus. On 24th July, a rally was organized as part of this movement. Shri. Pramod Mutalik was the main speaker. It was the 4th such rally under this nation-wide movement.

The rally was organized with the initiative of Shiv Sena Telangana – Andhra Pradesh, Sriram Sena and Hindu Janajagruti Samiti (HJS). Shri. Mutalik said, “It is so shameful that neither the Indian Government nor MPs elected from all over India have disclosed information on Hindus’ exodus. Pakistan has to be destroyed for eradicating Pakistan-sponsored terrorism. Only then, there will be peace in the world. But strong retaliation is required, instead of holding discussions with Pakistan. We, Hindus had faith in Modi that he would stop cow-slaughtering; construct Ram-Mandir, cancel Article 370 and control love jihad; but so far, he has done nothing in this regard. If he wants Hindus’ votes again, he will have to fulfill Hindus’ demands. It is very shameful for Hindus that in a country of 100 crores Hindus, construction of a huge Prabhu Shriram Temple in Ayodhya has not yet been possible.”

One, who selects a wooden idol of Sriram over an idol of Ravana made in gold, is a true Shiv Sainik. Such Shiv Sainiks will establish Hindu Rashtra. It is a sincere appeal of Shiv Sena to Indian Government that it should take timely steps against the ploy of ‘Islamization’ of whole India; else, we will have to see Islamic State in India as is in Pakistan, Afghanistan, Syria or Iraq. Indian Government needs to remove blind- folds tied over its eyes and be alert against fanatics raising their heads in Kashmir and the global jihad trying to engulf this country. Terrorists of Lashkar-e-Tayba, Jaish-e-Mohammad and Indian Mujahedeen etc. openly roam around in Kashmir which is a challenge for law, order and democracy in Kashmir.

Exodus of Kashmiri Hindus is a challenge for Hindus from all over India ! – Shri. Rahul Kaul, national Coordinator, Youth for Panun Kashmir

In past hundred years, Hindus had to run away from Kashmir 7 times and this is the 8th time now that Hindus have left Kashmir. If we ignore this matter, what has happened with Kashmiri Hindus, can happen even with Hindus from Kurnool. You know the truth behind incident of Kairana in Uttar Pradesh. Therefore, all Hindus should join the movement of going to Kashmir. Indian Government needs to realize if it wants to improve conditions in Kashmir that the governance has been taken over by Islamic fanatics in Kashmir. National Conference, PDP, Congress and BJP, all these political parties have overlooked separatism and Islamic terrorism, making them as part of politics in Kashmir. The Government has coalition with separatists (agenda of alliance) and disappointed all Hindus which could be a destructive step towards giving up our right over Kashmir.

Shri. Kaul said while warning Congress and BJP that the discontent in Kashmir is due to religious fanaticism and this fact need not be hidden now. It is really unfortunate that the jihadi war in Kashmir has surpassed politics in that State.

Our national flag is opposed in Kashmir and we condemn such action. On next Republic Day i.e. on 26th January 2017, we shall hoist India’s flag in Kashmir. Terrorism has spread all over India from Kashmir; therefore, we will go to Kashmir and spread patriotism towards India. We are going to take Hindus from all over the country to Kashmir on 19th January 2017. Indian Government has to be watchful against jihadi terrorism spread in Kashmir, Kerala and other States. All powerful political parties in India have given protection to fanatic Islamic organizations like ‘Jamat-e-Islami’ and ‘Al-e-Hadees’ in some way or the other. Policies of various Governments have helped in nurturing such organizations. It has been observed that extending internal encouragement to separatists by political parties is responsible for indirectly promoting the separatist groups.

If Sriram Mandir cannot be built in Mecca and Medina, mosque will not be erected in Ayodhya ! – Shri. Pramod Mutalik

One reporter asked Shri. Pramod Mutalik, “What is the problem in constructing a mosque next to Ram Mandir in Ayodhya ?” On this Mutalik said, “There is no problem provided Hindus are allowed to construct Ram Mandir near their main mosques in Mecca and Medina.” Then the reporter said that how was it possible. So, Mutalik said if it was not possible to build a temple there, then mosque cannot be built in Ayodhya. We Hindus will not allow anyone to build mosque near Ram Mandir till our last breath.”

Rahul Kaul demanded that the Government should take out a ‘white paper’ on oppression of Kashmiri Hindus and set up a special investigation squad to conduct inquiry into genocide of Hindus and the stand taken by the State and Central Governments always denying true facts. It will clarify Central Government’s policy regarding duties and responsibilities towards Indian citizens.

A book published by Sanatan Sanstha in English titled ‘Perfect method of cooking a meal’ was released by the pro-Hindu leaders. 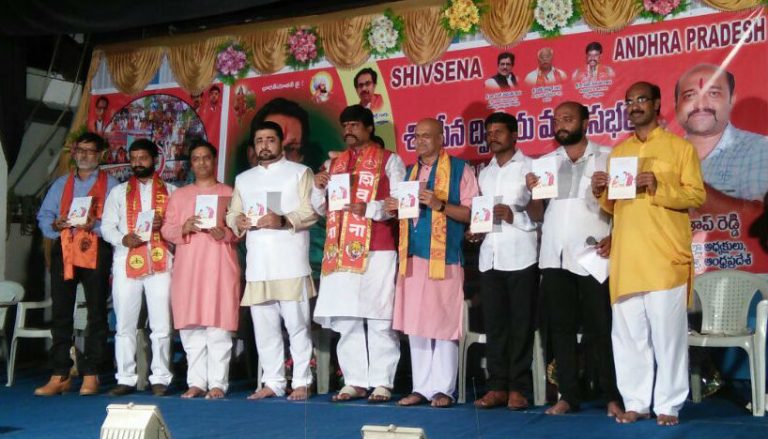 Indian Hindus must firmly stand in support of their Kashmiri brethren for their lawful rights !

Central Government should take a decision in connection with displaced Kashmiri Hindus, will be the demand made by displaced Kashmiri Hindus and a movement will be undertaken on 19th January 2017 called as ‘Chalo Kashmir’. In this background, all pro-Hindu and patriotic organizations have started a movement called ‘Ek Bharat Abhiyan- Kashmir ki Oaar’ for creating awareness amongst citizens. It has been decided to hold 80 meetings all over India for creating awareness amongst Hindus and the rally at Kurnool was the 4th such rally.