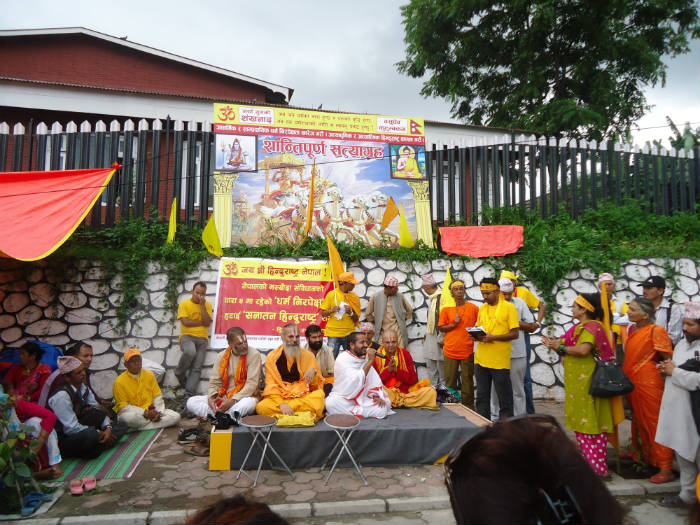 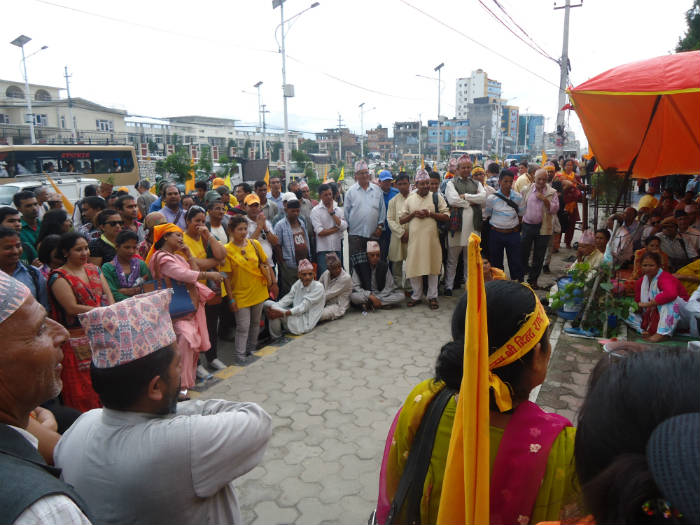 On the left hand side of the Constitution Assembly (CA) in the leadership of Swami Kamal Nayan Acharya Ji uniting all the Hindu individuals and Hindu organisations to unite and move together for the establishment of Hindu Rashtra. It should be noted that Hindutva andolan started from morning 8 am and it will be going on till tomorrow morning. Whole night they will stay on the road with bhajan / kirtan.

Where as on the right hand side of the Constitution Assembly (CA), the Janajati group was protesting demanding ”secularism”. Here one can see more number of people because activists demanding secularism were singing and dancing, their mike system was good, hence many people came just to watch. They finished their program around 5 pm.

Today Kanta Bhattarai Ji (Sabhasad of Rastriya Prajatantra Party ) called our representative and said that even after all the protest inside the CA for Hindu Rashtra still they mentioned ”secular” in the constitution.  But last night Bharat Prime Minister Narendra Modi called Nepal Prime Minister Sushil Koirala and told to consider the view of Nepali citizen too.

1. Narration of the glory of God through stories, punctuated with devotional songs, 2. Devotional discourses, '

A spiritual guide or teacher (especially one who teaches the students after their thread ceremony, and instructs them in Vēdās, laws of sacrifice and Dharma).