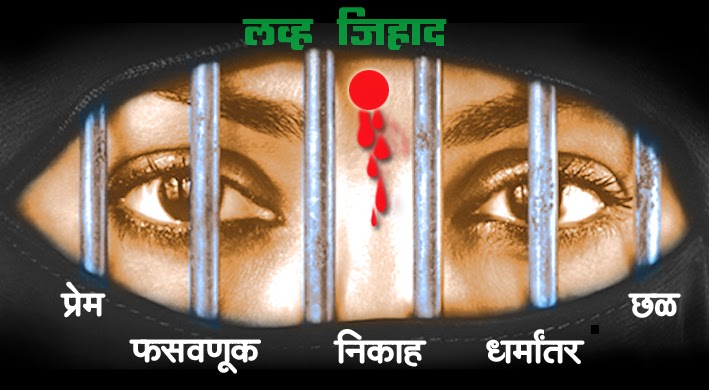 People refusing to acknowledge existence of ‘love jihad’ should be told the following facts !

1. E. Love jihad case even in Uttar Pradesh, Pune in Maharashtra and Bengaluru in Karnataka

2. A fanatic organization in Kerala is trying to ‘Islamize’ Kerala in 20 years through money and marriage (love jihad) – V. S. Achyutanand, the then Chief Minister, (Marxist Communist Party), Kerala

3. About 10,000 girls are imparted training for jihadi activities by terrorist organizations in Pakistan – Report of Central Investigation Department

4. Inspector General of Police Deven Bharati of Maharashtra has given information, in writing, about incidents of love jihad taking place in the State to a query raised under RTI.

5. In Nagar District, life of 300 girls spoiled due to love jihad in 3 months

6. According to information available with VHP, 1,20,000 Hindu girls have fallen prey to ‘love jihad’ conspiracy till 2009.

7. Last year, riots staged in Muzaffarnagar, Uttar Pradesh were result of love jihad. Recently, a Hindu young girl was forcibly detained in a madarasa in Meerut; was gang-raped; sexually exploited for conversion.

8. As per the statement of Smt. Manjula, President of Women’s Commission in Karnataka State, there are more than 5000 cases registered with police for missing girls.

9. In Mangaluru, Karnataka, a Hindu girl named Asha was converted to Ayesha; in whose name, Indian Mujahideen opened 35 accounts and withdrew billions of rupees and the money was utilized for bomb blast in Shri. Narendra Modi’s meeting at Patna. Presently, she is in jail.

10. About 15,000 Hindu young women are kidnapped by Muslims every year from metro cities like Delhi and Bhagyanagar (Hyderabad).

This data is only tip of an iceberg because in numerous cases, Hindu parents have avoided going to police for the fear of defamation and gone through oppression by fanatics.