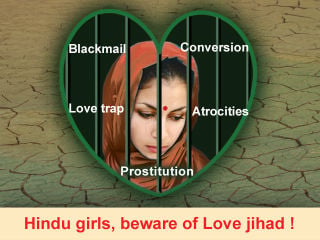 If ‘Love Jihad’ is to be stopped then it is essential to study the reasons for its rapid spread.

1A. Incorrect actions and ignorance of Hindu girls

1A 1. Promptly believing the Jihadi boys : ‘A Jihadi of Pakistani origin said, “It is easy to deceive Hindu girls, since they are innocent and promptly believe anything that is told to them. When we talk sweetly and flatter them, they consider us Jihadis as their own”. – Mrs. Durga Sardesai, USA.

1A 3. Marrying Jihadis with an intention of bringing them into the national mainstream : Some young Hindu women are aware of the Islamic cruelty, but in their inexperienced age they have a misconception that they can change the mindset of at least one Jihadi by bringing him into the national mainstream, and thus they end up harming their own life.

1A 4. Considering Jihadis to be virile and Hindus to be impotent : ‘When we visit girls who have been ensnared in the love-dragnet of Jihadis, they openly challenge the manliness of Hindus by saying that ‘Jihadis are virile and Hindus are impotent’.

1B. Inappropriate actions of parents

1B 2. Ineffective in giving emotional support to the girls : ‘According to one survey, girls who stay alone or are aloof in nature are more likely to be ensnared by ‘Love Jihad’. Girls who do not get emotional support try to seek it outside. Every girl wants parents who will enquire about her well-being with love and listen to her feelings.

1B 3. To preserve ‘secularism’, not allowing incidents of the true nature of Jihadis to reach their daughters : In a gathering of Marwari community, parents of ‘Love Jihad’ victims expressed their grievance in the following words – “Our daughters were religious by nature. They performed ritualistic worship and fasted etc. and yet they eloped with Jihadis”. These very parents would propound the sham philosophy of ‘secularism’ to the society. In case the Hindu-Jihadi problem did arise due to certain circumstances, they would give ‘secular’ advice to their daughter that “It is politics and you are in no way related to this subject. You should concentrate on your future”.

1B 5. Helpless attitude due to the fear of spoiling of their image : ‘When a girl becomes a victim of ‘Love Jihad’ her parents do lodge complaints with the Police, but they have a tendency to settle the case outside the court so as to maintain their image in the society.’ – Ms. Mamata Tripathi, Columnist

1C 1. Attitude of ‘Why should I bother’ : ‘When a girl from a Hindu household is abducted by a Jihadi, other Hindus think that ‘My daughters and other womenfolk are safe, so why should I bother ?’

1C 2. Height of ‘secular’ thinking : ‘Some people in Hindu society do not hear the screams of young Hindu women abducted by the Jihadis, as their ears are plugged by the plugs of ‘secularism’ that make them totally deaf.

1C 4. Not having the courage to rescue an abducted girl : ‘Hindu society does not have the courage to rescue a girl abducted by Jihadi youth. Just as the rest of the deer watch helplessly when a tiger attacks their herd, pounces upon one of them and tears it down cruelly, Hindu society too has become helpless. There is no masculinity in continuing with daily work by saying that, ‘the girl is dead for me’.

1D. Political parties are concerned only with votes !

‘Since they are worried about losing Jihadi votes, no political party has the courage to destroy the attack of Love Jihad.’