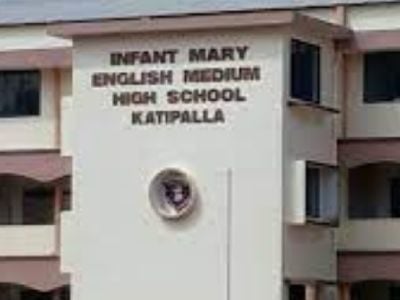 A Missionary school in Mangaluru, Karnataka has been embroiled in a controversy after some of the school teachers reportedly forced students to remove the Rakhis tied to their wrists and threw them in the dustbin. The incident was reported from Infant Mary’s English Medium School in Katipalla, Mangaluru, Karnataka.

We conducted a meeting of all staff. Those who did the mistake have apologized & issue has been resolved: Father Santosh Lobo, Convenor of the school pic.twitter.com/JAE4OUxcq2

According to reports, on the occasion of Rakshabandhan, the students reached the school wearing Rakhis. Objecting to the same, some teachers forced the children to remove the Rakhis and threw them. The children went home and informed about the same to their parents, who then gathered on the school premises to protest against the teachers and the management.

After the news spread, some members of the BJP and Hindu groups also reached the school premises and demanded an apology from the school administration. Following the protest, the school authorities were compelled to apologise for hurting and humiliating the Hindu students.

Father Santosh Lobo, Convenor of the school, was quoted by ANI as saying, “We conducted a meeting of all staff. Those who did the mistake have apologized and the issue has been resolved.”

The occurrence of such incidents tells an unsettling story of the systematic way of humiliating Hindu students in Christian Schools and making them feel disgraced by targeting their religious and cultural customs and traditions.

In one such incident, a Christian Convent school in Bharuch, Gujarat had barred girl students from entering school, if they were found to be wearing henna (mehendi) on their hands. It is reported that the school principal made around 40 girls stand outside the classroom for four hours as a punishment for applying the henna on their hands. Later the school management apologised after a protest by parents.

OpIndia had earlier reported on a similar incident that occurred in Kerala. The principal of a government school in Pallakad had issued a diktat, threatening the students with expulsion if they are found to be using religious symbols like kumkum on their foreheads or sacred threads on their wrists. Earlier, a government school run by an evangelical Christian affected an order on girl students not to wear flowers and bindi.

In fact, recently, OpIndia chronicled 19 such incidents in which Christian missionaries have harassed Hindu children over religion.