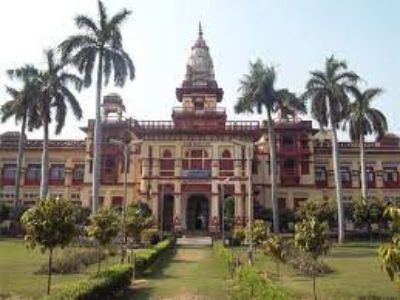 Varanasi: The Banaras Hindu University (BHU) has become the first university in the country to introduce the ‘Hindu dharma’ in its regular curriculum.

The university has started a postgraduate course in Hindu studies, said the university authorities on Tuesday, claiming that this is the first such course offered by any university in the country.

The course under Faculty of Arts will be conducted at Bharat Adhyayan Kendra, a centre established in the centenary year of the university, in collaboration with the departments of Philosophy and Religion, Sanskrit and Ancient Indian History, Culture and Archeology.

Coordinator of the Bharat Adhyayan Kendra Prof. Sadashiv Kumar Dwivedi said that 45 students, including a foreigner, have been enrolled in the first batch of this two-year course. The course is of four semesters with 16 papers. “It took more than a century to begin such a course on Hindu Dharma in the university after its establishment in 1914,” said Prof. Dwivedi.

The course was inaugurated on Tuesday by rector Prof. VK Shukla. He said that it is a matter of great pride for the BHU to start the course that will make the world aware of many unknown aspects of Hindu Dharma and help in taking its teachings to more people.

“The course is an interdisciplinary programme, which is in line with New Education Policy 2020,” said Prof. Shukla, adding that the beginning of this course at this centre symbolizes innovation which is the need of the hour.

The inaugural function was held in hybrid mode. Addressing the programme, the director of the Indira Gandhi National Centre for Arts, Dr Vijay Shankar Shukla underlined the need to have such a course on Hindu studies. He said, “The idea behind this goes back to 18th-century scholar Pt. Ganganath Jha travels through time to Mahamana Madan Mohan Malaviya. However, the link was broken for some reason. But, with the initiation of this course the goal appears to have been achieved.”

Chancellor, Mahatma Gandhi Antarrashtriya Hindi Vishwavidyalaya, Wardha, and Centenary Chair Professor at Bharat Adhyayan Kendra, Prof. Kamlesh Dutt Tripathi, who chaired the programme, highlighted the values and mantra of unity that are core to the Hindu Dharma. He added that one cannot separate Hindu Dharma from being constantly logical and scientific.

The function was also addressed by other Centenary Chair Professors, including Malini Awasthi, Prof. Rakesh Upadhyaya and Prof. Yugal Kishore Mishra. The speakers called upon the scholars to come forward and preserve the Sanatana Parampara. They said that the course is important for building the Sanatana life values. They also spoke about the scientific aspect of Gayatri Mantra. All the newly admitted students of the course, centenary visiting fellows of the centre and scholars from all over the country joined the programme in hybrid mode.

Source : The Times of India