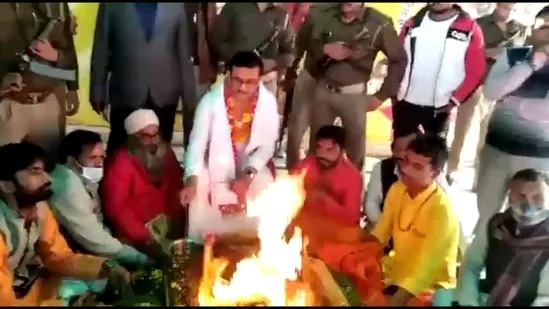 Former Uttar Pradesh Shia Central Waqf Board chairman Wasim Rizvi has embraced Hinduism at a temple in Ghaziabad. Reports say that Rizvi was converted to Hinduism by Mahant Narasimha Ananda Sarawati of the Dasna temple on Monday.

Rizvi recently earned the ire of the Muslim community after he challenged 26 ‘ayats’ of the Quran and then claimed to have written a new Quran. According to Rizvi, he had even received death threats from Muslim groups for filing a PIL in the Supreme Court seeking the removal of verses from the Quran. In his petition, Rizvi claimed that the objectionable verses have been added to the holy Quran much later that ‘teach violence’.

Rizvi had also stated that his dead body should be cremated according to the traditional Hindu ritual, and not buried after his death. Rizvi also mentioned that his funeral pyre should be lit by a Hindu seer Narasimha Ananda Sarawati of the Dasna temple in Ghaziabad.

Rizvi had sometimes back released a video in which he said that he feared for his life as several radical Islamic outfits had called for his beheading.