This scheme of teaching false history in India has been going on since the time of Gandhi-Nehru – Mr. Shankar Sharan, Senior Writer and Columnist 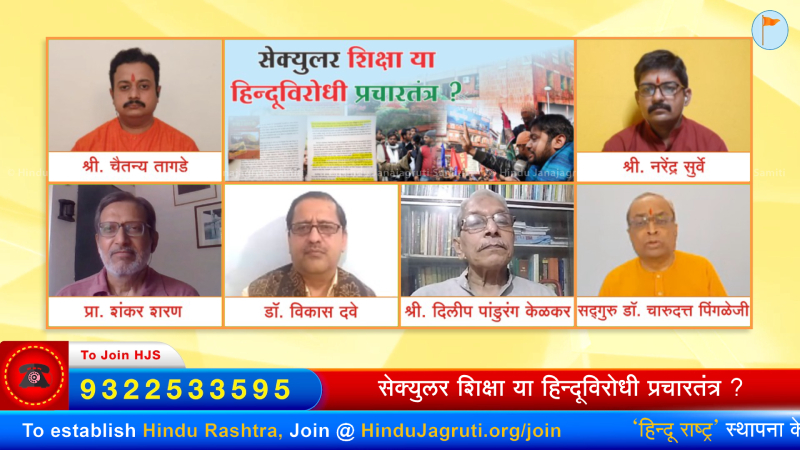 ‘Mahatma Gandhi, while supporting the Khilafat movement, started calling the brutal Mughal invaders good and thus glorifying them, so that Muslims can be happy and join the freedom struggle together; however, this is the beginning of telling false history. After Independence, Hindu Dharma was treated as untouchable in education in the country, due to the influence of Soviet Communists. The wrong history is being written since the time of Gandhi-Nehru. Since then, leftist ideology i.e. anti-Hindu ideology began to be imposed on the people. Anti-Hindu history has been taught for decades. Even in the present education, anti-Hindu and anti-national aspects are being taught as good’, said senior writer and columnist Mr. Shankar Sharan. He was speaking at an online webinar on ‘Secular Education or anti-Hindu Propaganda technique’ organised by Hindu Janajagruti Samiti. The programme was viewed by 2853 people on Hindu Janajagruti Samiti’s website Hindujagruti.org, YouTube and Twitter.

On the occasion, the All India Convener of ‘Bharatiya Shikshan Manch’, Mr. Dilip Kelkar said, “The basic reason behind the desecration of statues of Swatantyaveer Savarkar and Swami Vivekananda in JNU and Aligarh Muslim University by raising anti-India slogans is ‘leading the entire life in un-Indian way’. Therefore, we have to bring Indian way of life in all fields such as education, justice, industry, arts, etc.” The Director of Madhya Pradesh Sahitya Akademi, Mr. Vikas Dave said, “Sa Vidya Ya Vimuktaye I’ (The education that liberates is the only true education). Our Sages and Ascetics had introduced the method of teaching so that our inner Knowledge becomes manifest. Today, we have strayed from the original purpose of that education. If we want to establish a good governing system, then teaching Dharma from childhood is the best education”. Speaking on the occasion, Sadguru (Dr.) Charudatta Pingale, National Guide of Hindu Janajagruti Samiti, said that the Indian Constitution, in its preamble gives equality to all; however, there is a difference and inequality between the minority and majority in the prevailing education. According to Article 28 of the Constitution, no Government grant can be given for any religious education. Therefore, the majority (Hindus) cannot be taught their Dharma; however, under Section 30, minorities (Muslims) can be taught their religion through Government grants. This is nothing but discrimination on the basis of religion, and it must be eradicated.