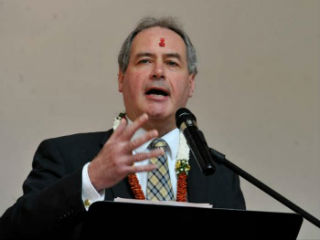 The motion expressed deep sadness over the violence perpetrated by the cross-border Islamic terrorists in January 1990 against the Kashmiri Pandit community. Bob Blackman, the primary sponsor of the motion, condemned the desecration of the holy sites that were vandalised and desecrated during the genocide. He expressed his condolences with the families of Kashmiri Pandits, who were mercilessly killed, raped, injured during the exodus.

The motion reiterated that families of Kashmiri Pandits had to flee their homeland to avoid persecution at the hands of the Islamists. The text further read, “(The motion) commends the resilience and courage shown by the members of Kashmiri Pandit community who survived this gruesome ethnic genocide and who did not resort to taking up arms but instead pursued education and aspiration.”

Denouncing the cross-border terrorism, the motion further emphasised that it is the responsibility of individual nations and the international community at large to prevent crimes against humanity, as witnessed in the case of Kashmiri Hindus.

“(The motion) urges the Government of India to fulfil its long-standing international commitment to recognise and acknowledge the worst form of genocide of Hindus in Jammu and Kashmir and enact the proposed Panun Kashmir Genocide Crime Punishment and Atrocities Prevention Bill in the Indian Parliament, therefore delivering the long awaited justice for the Kashmiri Pandits in exile,” the motion text concluded.

Ahead of the 31st anniversary of the genocide and exodus of Kashmiri Pandits, Canadian Conservative MP Bob Saroya has extended his full support to the Modi government for the resettlement and rehabilitation of the Kashmiri Pandits in the Valley. While reiterating his support to the Modi government, he concluded, ” I ask the international community to take effective measures to prevent this and similar types of crimes against humanity. I support the Government of India plans to help Kashmiri Hindus to return safely back to their homes”.