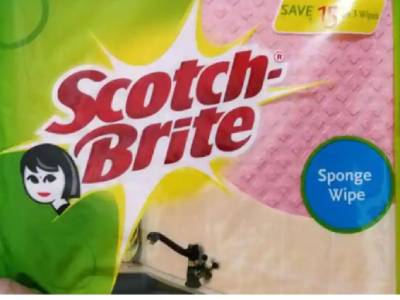 A controversy has erupted across social media platforms after a LinkedIn user and marketing executive pointed out the ‘gender marker’ logo on the packaging of the cleaning product Scotch-Brite.

Karthik Srinivasan, who claims to be communications strategy consultant, recently took to LinkedIn to call out Scotch-Brite for their logo which stereotyped gender roles. Pointing out at the vector image of a woman with a bindi, Srinivasan pointed out that how some of their products did not carry the same logo, while other products like scrub pad/sponge, brush, brooms, bathroom wipes, stainless steel scrubs, toilet brushes carried it.

In his LinkedIn post Srinivasan said that Scotch-Brite’s logo features a ‘vector image of a woman with a bindi’ and added that he understood that back in 1990 the ‘period was different’, but in 2020 ‘such gender markers seem awkward and out of place’. 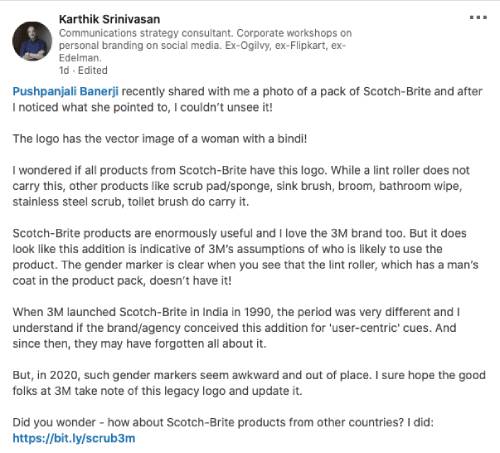 While Srinivasan talks about gender stereotype in logo, he mentions how the woman in logo is ‘Indianised’ with a bindi on her forehead. “While searching for the logo’s history (there wasn’t any that I could find), I also found 2 other logos of Scotch-Brite on logo websites that may or may not be older, official versions of the brand’s logo. But what was interesting about them was that they had this vector addition without the bindi/dot, that differentiates it as ‘Indian’. The first one seems like a ‘Western’ woman, while the 2nd one is closer to what we currently see in the Indian version of the logo, but with the bindi,” he writes in his post.

Following Karthik Srinivasan’s long post on the issue, Atul Mathur, who is the Head of Marketing – Consumer Business of 3M India responded to the controversy and thanked Srinivasan for his “insightful comment”.

“I head marketing in 3M India for our Consumer business. You have correctly surmised that this is a legacy vector, and that it is undoubtedly time to move on from regressive beliefs,” said Mathur. From his post, it is not yet clear whether he meant the gender stereotyping was regressive or the ‘Indianising the logo with a bindi’ was.

He concluded the post by saying, “I am pleased to inform you that you will see the logo change a few months down the line.”

The statements by the 3M India’s Head of Marketing Atul Mathur, however, created a storm on social media platforms after he called Hindu practise of adorning Bindi on forehead was a ‘regressive practise’. Netizens lashed out at the brand for ‘insulting Hindu women’.

Smita Barooah pointed how 3M India’s statement terming Hindu women ‘regressive’ was out of line and sync with Indian culture and norms.

So, according to @ScotchBriteIN, the bindi is regressive now?

Well,"regressive" bindi-wearing women like me,& millions of others, have bought your products in the past.Perhaps THAT's what needs to change.
Your statement is out of line, & out of sync with Indian culture & norms pic.twitter.com/Vh5lSQBnna

A social media attacked the company stating that hope the female employees of the 3M India did not wear Bindis to work at your manufacturing units or perhaps not employed by them at all.

Who is that marketing head of @ScotchBriteIN ?

Bindi is regressive @3MIndia ??? Hope your female employees don't wear Bindis to work at your manufacturing Units or you dont employ any Indian women in your organisation ! pic.twitter.com/Bpwar84Il1

They also noted how 3M has women as part of their logo internationally but only found Hindu women wearing Bindi as a regressive practise.

The social media user and marketing executive Karthik Srinivasan who wrote the original LinkedIn post later took to Twitter to clarify that he did not mean the wearing the bindi as ‘regressive’.

2/2 The only reason why I even mentioned it is because it is different from their own earlier logos in other countries. It is possible that in the 90s when the brand was launched in India, they wanted to appeal to Indian women in particular and added this woman-with-bindi vector. pic.twitter.com/JDHoMt4mFs

He explained that he meant that gender stereotyping was regressive. Srinivasan claimed he pointed out the bindi in Indian logo as logo of other countries did not have that. Netizens pointed out that the gender stereotype could have been pointed out without specifying the bindi as it was quite evident the logo had a woman. He then claimed it was necessary to point out bindi-wearing logo for ‘gender disparity’ as woman logo in other countries didn’t don a bindi.

While Scotch-Brite may be stereotyping women as household cleaning experts through the logo, Indian women wearing a bindi is quite normal. Hence, when Srinivasan says he was shocked to see the ‘Indianised’ logo in a post on ‘gender stereotypes’ he contradicts himself as you’d hardly see foreigners wear bindis. It is not clear whether Srinivasan thought bindi-wearing woman on the logo is the wrong stereotype or just woman, because he has again highlighted the bindi part.