Representations were submitted to local administration and schools at Mahad and Roha.

Representations were submitted to schools at Kharavali-Birwadi and to Kharavali Gram-panchayat which was accepted by ‘Sarpanch’ Sou. Swati Mhamunkar, making an appeal for maintaining honour of national flags. Devout Hindus attending ‘Dharmashikshan’ classes conducted by HJS had joined the drive. 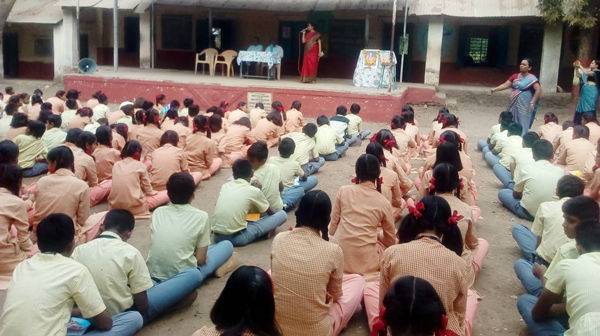 Pune : Representation was submitted to Principal Shri. Bagul of Zilha Parishad’s school. In the background of 26th January, students of Yashawant Vidyalaya at Khadakvasala were explained significance of maintaining honour of national flags and national song. There were about 500 students from 5th to 10th standards who attended the lecture. An exhibition of flex-boards giving information on life-history of revolutionaries was also held in the school which received spontaneous response from all students. Similar representation regarding 26th January was submitted to Sou. Hanamghar, the Principal of Zilha Parishad School at Kirkitwadi.

Pune : National flag and national song are symbols of national identity and they should be paid due respect. Hindu Janajagruti Samiti (HJS) undertakes a drive every year for maintaining honour of national flags in the background of Republic Day. HJS has been submitting memorandum with the said demand at various places to police and local government administrative officers. Smt. Mrudula More, ‘Nayab Tehasildar’ of Bhor and Police Inspector Raju More of Bhor police station were submitted such memorandum by HJS.

Yavatmal : Hindu Jananagruti Samiti (HJS) has demanded through representation submitted to Yavatmal DSP M Rajkumar and Dy. District Collector Lalitkumar Varade on 9th January that action should be taken as per the decision taken by the Government imposing ban on use of plastic; so as to prevent insult of national flags occurring on Republic Day and it has also been demanded that cases should be filed against vendors selling plastic national flags and disregarding Government’s notification.

Representation submitted at District Collector’s office demanding imposition of ban on a book on Swatantryaveer Savarkar for publishing disgraceful false information on Swa. Savarkar and filing case of sedition against the author of that book, was forwarded to Honorable Home Minister for necessary action.