Bengaluru: As per latest report, Following stiff resistance from the pro-Hindu organisations and a section of BJP leaders, the Kanakapura taluk administration stopped the works of Yesu Krista statue at Kapali Betta in Harobele near Kanakapura town, which is the home turf of Congress leader DK Shivakumar.

According to the sources, the police blocked the Kapali Betta entrance due to which the works of the statue also stopped. Locals informed that the labourers who were engaged in the work went out of the village.

It can be recalled that on Monday night the state government transferred local tahsildar Anandaiah who was considered close to DK Shivakumar family. The opposition has been alleging that the Congress MLA is doing all this to appease Christian and Sonia Gandhi. 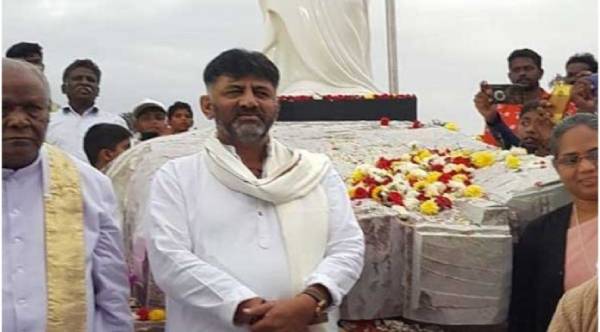 Two days after the Congress leader laid the foundation stone for a 114-ft statue in his home constituency, Kanakapura, the Karnataka government has raised objections and sought a report from the Ramanagara Deputy Commissioner.

Reportedly, the Yediyurappa government has decided to take a relook at the land sanctioned by former Chief Minister HD Kumaraswamy.

Revenue Minister R Ashok told reporters that the 10-acre land on which the project is coming up is ‘gomala land’ (government land reserved for cattle grazing) and it cannot be allowed to be used for any other purpose.

“Four years ago, the Harobele Trust was registered and had taken up Kapali betta for development. DK Shivakumar is part of the trust. Since this is government land, one cannot gift it to others. We have learnt that Shivakumar gifted it to build the statue. I have sought a report from the DC of Ramanagara in this regard. The project will be kept on hold till we get clarity,’’ he said.

Earlier, the office of Shivakumar has stated that the Congress leader was utilising his own funds to purchase 10 acres of land at Kapalibetta from the government for the trust that is constructing the statue and claimed it would become the tallest monolithic statue of Jesus in the world.

However, senior minister R Ashoka speaking on the ownership of the land said that the land was not Shivakumar’s property but a government gomala land. “I don’t know in what sense he (Shivakumar) has said he has purchased and given it… no one can donate it to anyone,” R Ashoka added.

This move by D K Shivakumar has came under severe criticism from BJP leaders in the Karnataka state.

Meanwhile, DK Shivakumar move to ‘donate’ land for Jesus Christ statue in Karnataka has invited sharp criticism from the BJP with former Union minister Ananthkumar Hegde attacked him by saying, “A Tihar returned gentleman is trying to please his Italian mother for a post by demonstrating his gallantry through a statue of Jesus Christ. It will not be surprising if more Ghulams (slaves) from the Congress jumped into the arena of appeasement politics.”

Karnataka BJP minister KS Eshwarappa ridiculed Shivakumar by saying that the Congress party which had opposed the construction of Ram temple was installing the statue of Jesus Christ. In a tweet, he mentioned that Jesus Christ was born in the Vatican, instead of Bethlehem.

“To impress their leader, those in the Congress, who opposed the construction of a grand temple dedicated to Lord Ram, born in our holy country, are going to build from their own money a statue of Jesus, who was born in the Vatican,” Eshwarappa tweeted.

Another BJP MP from Mysuru, Partap Simha, questioned the motive behind installing the statue and demanded to know whether it was a scheme to convert Vokkaligas of Kanakapura. In a tweet, he asked Shivakumar whether he had forgotten seers of Mutts like Siddaganga, Suttur and Adichunchanagiri.

“Erecting the statute of Shivakumara Swamiji (Siddaganga mutt) would have been like a crown on Kapalibetta- isn’t it?”, he tweeted.

Karnataka Congress leader and MLA DK Shivakumar is currently out on bail in connection with the money laundering case. He was arrested by the Enforcement Directorate (ED) on September 3 after undergoing four days of interrogation in relation to the case. The ED had cited Shivakumar’s non-cooperation during the questioning as the reason for his arrest.

The alleged money laundering by DK Shivakumar came to light after raids by the tax officials on August 2, 2017, on Shivakumar’s residence in New Delhi, which led to the seizure of unaccounted cash worth Rs.8.59 crore without evidence of its source of income.

The tax agencies had filed cases against Shivakumar and four other persons associated with him under Sections 277 and 278 of the Income Tax Act, 1961 and Sections 120(B), 193 and 199 of the Indian Penal Code (IPC).

According to report by Organiser, Social activist Girish Bharadwaj has petitioned the District Commissioner to look into the matter and has requested him to investigate the ownership of the land.

Land revenue records show that the the hill and the land around it are under the government and no where it mentions DK Shivakumar as the owner. Activists are now questioning that how can he transfer the government land which is not in his name. Even if the land records online does not reflect the changes to ownership, they are questioning if DK Shivakumar had mentioned this huge tract of land being in his name in the affidavit filed with the Election Commission during the Karnataka Assembly elections.

According to report by Organiser, the said statue is to come up on a hill traditionally known as ‘Kapali Betta’ and the locals have called the hill by that name for generations. However, few years ago Christian Missionaries illegally usurped the hill by installing a huge cross and named the hill as ‘Yesu Betta’ (Christ’s Hill). The move had been questioned by many but no action seem to have been taken by the district administration.

Local sources say that the village has a number of Christian families who were converted by Evangelists over the last few decades and this move by the Congress leader is an attempt to appease them for votes.

It has come to notice that another petition filed  in 2017 had questioned the attempts by Christian Missionaries to illegally rename ‘Kapali Betta’ as ‘Yesu Betta’. The petition by Kanakpura activist HG Venkatesh had requested the District Collector to investigate into the matter where Christian Missionaries has attempted to take over the hill by illegally installing a 80 foot cross. The petition says that the residents of the village have been converted by coercion and enticements and there are no original Christians in the village.

However, despite the details provided and the petition by Bharata Punarutthana Trust more than 2 years ago, no action has been taken on illegal name change and land acquisition in Harobele. An RTI has also been filed to ascertain the ownership of the land. More details are awaited.