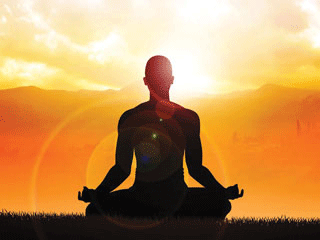 God’s Name is Self-created (Svayambhu) while man is named by another.

1.2 Why has God kept Himself obscure from man?

A. God has not kept Himself in obscurity. Remaining unmanifest is His basic nature.

B. God is not in obscurity. It is man who is blind. Since man cannot perceive the subtle dimension he cannot see God.

C. God does not want to answer man’s query ‘Why did You create the Great Illusion (Maya)?’ so He has gone into hiding!

Both God and saints have stated that all of us are a part of God. If an orphan is told that his parents are alive then he will certainly go in search of them. The search for God is similar.

1.4 Knowledge of God and man

‘Both destiny from willful actions (karmaprarabdha) and destined actions (prarabdhakarma) have been created by God. Thus if their creator Himself is venerated then what harm can they cause? What can your destiny which has been created by Him do then?’(1)

God protects internally and brings about death externally. That is why if one becomes introverted one traverses time and does not die but if one remains extroverted, one may have to face death.

When people approach us with worldly problems like inability to bear a male child, failure in arranging a match for their daughter, no success in getting a job, etc. we tell them, “Please do not ask us such questions, you may consult other evolved persons for that. We only give spiritual guidance and answer queries like how one can get a vision of God, attain the Final Liberation, etc.” After telling them this most individuals ask for addresses of those evolved persons. They want happiness from the Great Illusion (Maya); hence no one asks for God’s address!

2. Spiritual experiences of a seeker

A. A vision (darshan): Mostly a vision of God is obtained with the subtle sense organs of vision, not the gross eyes. Before giving Arjun a vision of His universal form Shrikrushna told him,

Meaning: You are incapable of viewing Me with these mortal eyes, (hence) I shall bestow you with divine vision. (Now) see My divine prowess. – Shrimadbhagvadgita 11:8

Man can establish contact with God through spiritual practice. Just as one feels like conveying important good or bad news to others so is the case of God. He too wishes to convey messages to man. These are called divine messages. Kansa came to know of Krushna’s birth through such divine messages.

3.1 How important should the news be to be broadcast?

Just as only important news is broadcast over the radio, so also only very important good or bad news is conveyed in a divine message.

B. How bad should the news be for it to be broadcast as a divine message?: If news about the culmination of incarnations like Rama, Krushna, etc. is considered as 100% bad, then news which is atleast 70% bad, for instance the birth of Shishupal is broadcast.

Divine messages are of two types.

3.3 Who can hear divine messages?

Only those with a minimum spiritual level of 70% hear divine messages if the cumulative merits of society are atleast 30%.

3.4 What does hearing divine messages depend upon?

A. Spiritual level of the individual.

B. Just as radio frequencies from a particular radio station get obstructed by a mountain in their path so also due to the obstacle of raja and tama components in society the sattva predominant frequencies of divine messages reach the earth in lesser quantities. As a result, there is a reduction in hearing these messages. The following example illustrates the effect of cumulative sins and merits: ‘A demon named Tarkasur had three sons. They were blessed with boons by Lord Brahma and had thus acquired three cities. All the three demons were devotees of Lord Shiva. One wise thing that they had done was that they had brought righteous and pious Brahmans and kept them in their cities. This enhanced their powers even more. These demons conquered heaven and dethroned the deities. The deities first approached Lord Vishnu and then along with Him, Lord Shiva, to express their grievances. Seeing their pitiable condition Lord Shiva sent for Sage Narad and told Him, “Assuming an illusory form visit the cities of the demons and create doubts about Righteousness in the minds of the meritorious souls living there.” Narad complied with His directives. The inhabitants of the cities forgot the path of Righteousness and became unrighteous. Thus their merits decreased Consequently the might of the demons diminished. Then Lord Shiva attacked the demons and with just one arrow penetrating the three cities, killed them (Saur Puran).’(3)

3.5 The yug (era), number of spiritually evolved individuals, cumulative sins and merits of society and the ability to hear divine messages

The following table gives the yug, number of people evolved beyond 70%, cumulative sins and merits of society and the percentage of people in society who are able to hear divine messages.

Depending on a seeker’s spiritual level, his feelings for God and saints vary stepwise as described below.

Vaman Pandit then set off to offer obeisance to Samarth Ramdas Swami at Sajjangad. When he paid obeisance to Him, Samarth placed His right hand on Pandit’s back and blessed him.

B. After worshipping God devotedly He is appeased and arranges for one to meet Shri Guru and when Shri Guru is appeased The Lord manifests before oneself to grant a vision.

I follow the orders of the Sadguru of this world,
I at once uplift the one on whom He bestows His grace. – 11.788
I am little attached to My devotees,
But I love devotees of Gurus immensely.
The spiritual emotion (bhav) of devotion is not attainable
Without the company of saints (satsang). – 11.1527
– Shri Eknathi Bhagvat

C. When experiencing objects fulfilling one’s desire through The Lord, Guru and saints one gradually develops detachment (vairagya) for them and becomes qualified to follow the spiritual path. This phenomenon does not occur if desires are fulfilled by subordinate deities (kshudradevata).

D. All characteristics of God excluding those of the physical body, are present in a Guru.

A. Differences between God and the Guru are enumerated in the table below.

* Outwardly why a Guru appears only in the form of a saviour, will be understood from the following stage.

Dr. Jayant Athavale: One of the missions of an incarnation is ‘destruction of evildoers (विनाशाय च दुष्‍कृताम्‌)’ yet why does one not see any Guru or saint performing this task?

Baba (H.H. Bhaktaraj Maharaj): The Guru’s mission is to grant salvation to a disciple. The saviour form of The Lord Himself is the Guru. A Guru cannot attain the spiritual level of an incarnation. He has certain limitations.

** Since God is in the unmanifest state He cannot place His hand in the manifest form ! If God does it then He is named as some deity.

*** If Shrihari or Tripurari gets enraged with devotees, then Shri Guru protects them with determination. – Shri Gurucharitra 2:24

Meaning: Shrihari (Vishnu) and Tripurari (Shiva) are Names used for The Lord in the Vaishnav and Shaiva sects respectively. If the destroyer form of God gets angry with the motive of teaching something to a devotee, then simultaneously the saviour form of God, that is the Guru takes care of him. However, if the Guru Himself gets enraged then there is no remedy but to ask for His forgiveness.

B. The disciple follows the advice of the Guru; hence he acquires spiritual knowledge of the unmanifest. God complies with what a devotee tells Him, that is He attains the manifest form and appears before the devotee.

5.3 The Guru’s prayer to The Lord when the Guru is in the state of the embodied soul (jivadasha)

Lord grant Me a disciple who has the knowledge of Brahman,
One who is supreme in spiritual emotion, an icon of devotion and love
Detachment is present in the one who has these qualities.
Tuka (Saint Tukaram) prays fervently, if I find such a disciple,
I will be the happiest person,
I will shield the dear one from evil eyes.

Lord with Your grace grant Me a disciple
Who will carry on My work (of spread of Spirituality)
May he become omniscient in the knowledge of Brahman
and be upheld in glory in all the three worlds.
Tuka is calling out to You, My Lord Vithoba,
He is knocking at Your door.

For more information on the Guru refer ‘Science of Spirituality: Vol. 4 – Path of Guru’s Grace (Gurukrupayoga)’.