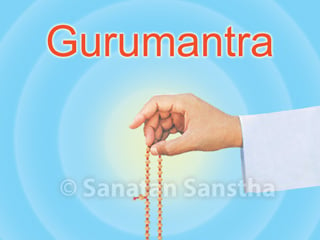 The Guru imparts a Gurumantra for the disciples so that they realise that the Guru has bestowed His grace upon them. This article explains importance of chanting the Name given by the Guru, misconceptions about Gurumantra and why it needs to be kept secret.

Though the word Gurumantra includes the word ‘mantra’, it mostly implies which Name of God a disciple should chant. 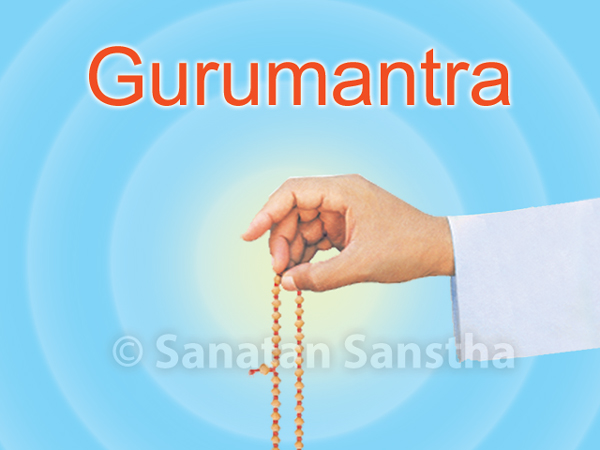 2 B. Instead of chanting the Name of the
Deity we like, we should chant the Name given by the Guru

3. Qualities required in the Guru for
initiating chanting of God’s Name (meaning, spiritual practice) in others

Many people have the following misconceptions about the Gurumantra. The reason for developing these misconceptions is that they are not familiar with the spiritual terminology.

5 A. Who receives a Gurumantra ?

Only an intense mumukshū or one who has intense desire for Guruprāpti or a Gurumantra. If one considers the spiritual level of an ordinary individual to be 20% and that of the one who has attained Moksha (Final Liberation) to be 100%, we can say that an ordinary individual is not at all interested in Spirituality. An individual with 30% spiritual level performs ritualistic worship of Deities, reads Holy texts and goes to temples. At a spiritual level of 40%, he is able to chant God’s Name. At a spiritual level of 50%, he does satsēvā and at 60%, tyāg in the real sense of the word commences. At 55% level, he is blessed by a Guru and is initiated with a Gurumantra. In short, only when the interest in Spirituality exceeds 50% does a Saint behave as a Guru towards that seeker. Only when an individual sacrifices more than 55% of his body, mind and wealth for Spirituality does he receive a Gurumantra. Hence, despite remaining in the Guru’s company for many years people are not initiated with a Gurumantra because they have not attained the required spiritual level.

5 B. Receiving a Gurumantra through a vision in a dream

Saint Tukaram’s example is well-known for this. He was initiated with the Gurumantra ‘Rām Krushṇa Hari’ by His Guru, Babaji Chaitanya, through a vision in a dream. When the Guru imparted this mantra to Him, He (the Guru) had renounced His body. The following points will help us recognise whether the mantra in a dream is psychological, based on the rule that ‘one dreams in accordance with the impressions in the subconscious mind’ or they are spiritual in nature, that is, whether a vision in a dream is true.

5 C. Do not ask for a Gurumantra

We should not ask any Guru for a Gurumantra. Not just a Gurumantra, but a Guru does not give anything the individual does not deserve and if deserving then He gives it Himself. Once when Bhau Bidwai (known as Achyutanand), one of Baba’s disciples, was leaving for his office Baba summoned him and initiated him with a Gurumantra.

When the Guru spontaneously tells someone to chant a Name, it is a Gurumantra. However, it is not enough to just receive a Gurumantra. It is necessary to continue chanting the Gurumantra and complement it with satsēvā, tyāg and love for others.

7. Where should one chant a Gurumantra ?

Baba’s Gurumantra is of the Bhaktimārg (Path of Devotion) and is not related to Karmakānḍa; therefore, it can be chanted anywhere all the twenty-four hours of the day. Baba Himself has told some people to chant in the toilet, during menses, during soyar and sutak, under all circumstances for that matter. All places and time have been created by God Himself, hence there is no question of chanting the Gurumantra at a particular place or time. However, if the Guru Himself has imposed some restrictions, then they should certainly be followed.

8. Why is it said that – A Gurumantra should be kept secret

Ramanuj was given the Gurumantra ‘Om Namo Nārāyaṇāya’ by Goshthipurna and was ordered to keep this a secret. Since He was told that, one can attain Mukti (Liberation) with this mantra, Ramanuj climbed the roof of a nearby temple and started chanting the mantra aloud. Many passers-by heard this mantra. When Goshthipurna heard this, He was enraged and said to Ramanuj, “You have disobeyed my order. You will languish in Hell”. Ramanuj responded, “If by your grace all these people attain Mukti then I will happily go to Hell”. Hearing this, Goshthipurna was pleased and said, “From today onwards, the doctrine of Vishishthādvaitwād will be known as ‘Rāmānujdarshan’ after you”.

9. The superfluousness of a Gurumantra

9 A. Those who perform spiritual practice
as per the science of Spirituality do not need a Gurumantra

9 B. Just as parents of a child and the child,
do not need to say that they love each other, so also in a
true Guru-disciple relationship, a disciple realises that the Guru has bestowed His grace upon him

The Guru does not need to tell the disciple that. Yet, in the beginning, most disciples do not perceive that the Guru has showered His grace upon them. The Guru imparts a Gurumantra for them to realise this. Consequently, the disciple begins to feel that he has a Guru who takes care of him and bestows him with His grace.