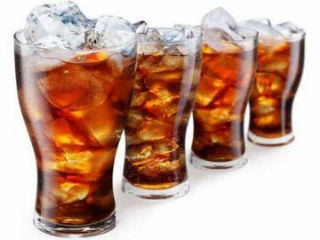 Most of us are very fond of drinking cold drinks and do not mind even if our kids prefer the same over healthy drinks like milk or fruit juices. Soft drinks are Tama-predominant. When a person consumes soft drinks, it creates centres of concentrated black energy everywhere in the body cells with the help of Pruthvitattva due to spread of Tama component in the body. The body turns weak due to Tama-predominant waves and the person experiences distress from negative energies. This leads to a large scale attack by negative energies in a shorter time.

A.  The pH value (Measure of the acidity or basic of an aqueous solution) of artificially flavoured cold drinks is usually 3.4, because of which the teeth and bones become weak. The process of reconstruction of bones stops in man after the age of 30 years. Thereafter, the bones in body start to weaken in proportion to the acid in our diet.

B.  The difference in the temperatures of the cold drinks and the body of the individual causes an adverse effect on his body : From the perspective of health, there is not a trace of vitamins nor of any minerals in cold drinks. They contain only sugar, carbolic acid and other chemicals. Normal temperature of human body is 37 degrees Celsius. While the temperature of the cold drinks is much lower, even up to 0 degrees Celsius. The difference between the temperatures of the drink and the body has an adverse effect on the digestive system. As a result, the individual (consuming the drink) suffers from indigestion. This gives rise to formation of gas and bad odour, which spreads between the teeth and causes many ailments.

C.  ln an experiment, a broken tooth was placed in a bottle of a cold drink and the bottle was corked. The tooth was scheduled to be removed for further analysis after 10 days. However, it was not found in the bottle; which would mean that it dissolved in the drink. Come to think of it, when such a strong tooth can dissolve due to the adverse effect of the ingredients of the harmful cold drink, what would be the state of the soft intestines, where the drink remains for hours to be digested ? 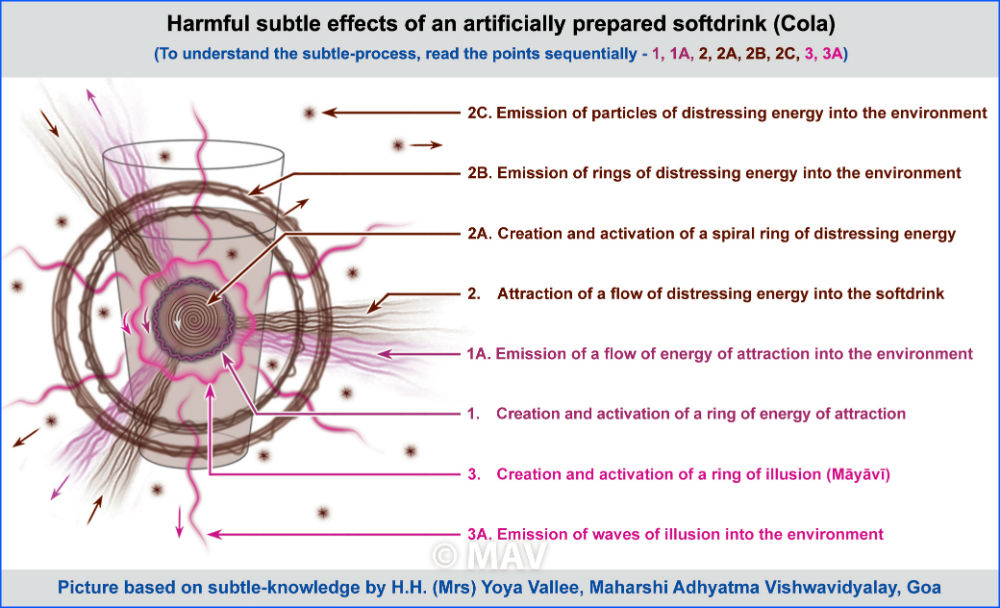 3. Task : Creation of centres of concentrated black energy everywhere in the cells with the help of Pruthvitattva (Absolute Earth Principle), due to spread of Tama component in the body

4. Effects : Body turning weak due to Tama predominant waves and experience of distress from negative
energies

Subtle-effects on an individual on consuming cold drinks

1. This cold drink has been created by egoistic people of Kaliyug for their own promotion.

2. It is entirely unnatural and tamasik in nature. People get attracted to it because of its content of black energy and illusion creating energy. It is not beneficial at physical, psychological and spiritual levels.

3. The artificially prepared soft-drinks are stimulants & make the consumers enthusiastic (externally); they become more active physically as well as mentally.

4. The artificially prepared soft-drinks make the mind unstable. By consuming such drinks, people develop a soft corner (love at the emotional level) for each other. It is because of the mayavi-shakti in these that they taste good and one is tempted to consume more.