Alcoholism is a broad term for problems with alcohol, and generally refers to alcohol addiction, which is the compulsive and uncontrolled consumption of alcoholic beverages, usually to the detriment of the drinker’s health, personal relationships, and social standing. It is medically considered a disease, specifically an addictive illness. Alcohol misuse has the potential to damage almost every organ in the body, including the brain. The cumulative toxic effects of chronic alcohol abuse can cause both medical and psychiatric problems. (Source – Wikipedia http://en.wikipedia.org/wiki/Alcoholism)

2. What happens in subtle when one consumes alcohol ?

Alcohol has been created under the influence of a desire-oriented attitude. That is why; the six foes (namely – pride, greed, envy, anger, lust & delusion) get awakened and erupt in a strong manner by drinking it. Upon consuming alcohol, a black covering is created around the body, mind and intellect of the individual and he completely goes under the control of the mantrik (A subtle-sorcerer). Due to the Mayavi (Illusion creating) and Mohini (Enticing) components in alcohol, the individual feels like consuming alcohol repeatedly. Also, due to the Mohini component present in alcohol, a ring of Energy of attraction of Mohini is created in the alcohol, and waves of distressing energy are congregated in the body of the individual and the body of the individual becomes completely charged with these waves. 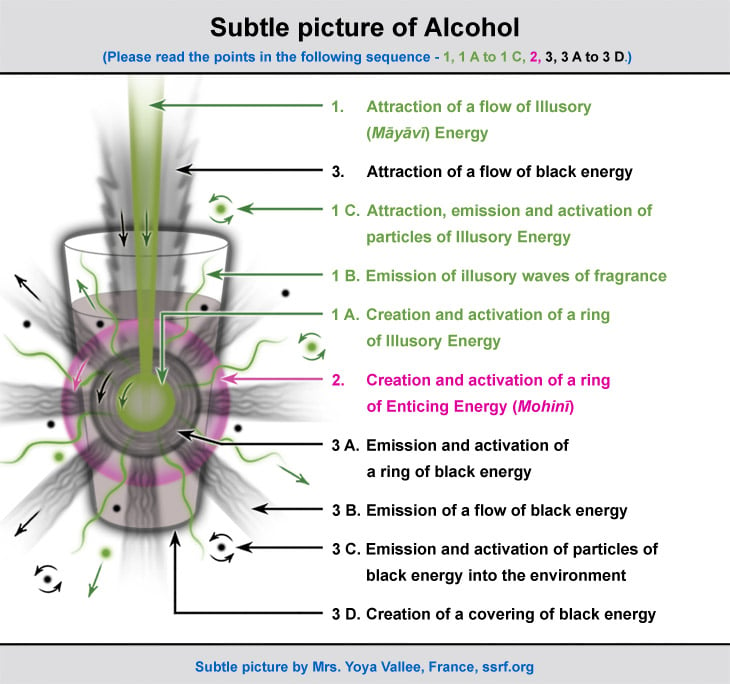 A. The mucous lining of stomach gets inflamed on consuming alcohol

‘Alcohol absorbs moisture from any object. Thus, inflammation is experienced when alcohol comes into contact with any part of the body. Sometimes, even the skin experiences a burning sensation. From this we can imagine the harmful effect of alcohol on the extremely sensitive mucous lining of the stomach.’ – HBP Sudhatai Dhamankar.

B. Alcohol mixes in the blood 4000 times faster than sugar and salt do

C. Other effects on the body

4. Today’s young generation has fallen prey to alcohol and other addictions !

A. Recently there was a health check-up of young students in primary schools managed by the Municipal Corporation of Pune (in Maharashtra). It was found that the students were not only addicted to alcohol but also had sexually transmitted diseases because of visiting prostitutes. All these students were below 16 years of age.

B. In its issue of March 6, 1965, Marathi newspaper ‘Sakal’ carried news on the number of children addicted to alcohol in Britain. It said that, the British Police raided a cine-club on London’s Bo-street at 2.30 a.m. They found 383 children below 18 years of age in a drunken state. Among them, 129 were girls. Many were below 16 years of age. One girl was 14 years old.

C. It is found that students in schools and colleges who are addicted to alcohol are also adulterous, and they suffer from sexually transmitted diseases at a very young age. Many adulterous people are addicted to alcohol. A large number of criminals are also found to be addicts. Particularly, murderers are notoriously alcoholic. An addict’s intellect is corrupted, his discriminative ability is destroyed and he commits any kind of sin. Even committing murder becomes very easy for him. In general, most people who indulge in fights are alcoholics. Sin, abuse and bad conduct enter the mind of an individual through alcohol. His ability to discriminate between the good and the bad is destroyed to such an extent that even his family members or his own innocent children are not spared of his brutal attacks.

5. What is the solution to the menace of alcoholism ?

A large part of the Hindu society has become addicted to alcohol and they defend themselves for false reasons. It is because of this that the Nation, society and families are distraught. Awaken the feeling for Dharma and rise above the obstacles.

6. What should one be addicted to ?