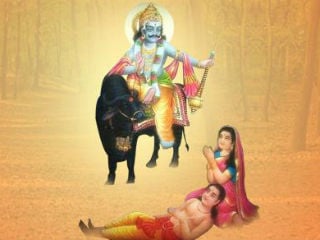 The story of Sati Savitri is related in the Mahabharata. When the Pandavas were in exile, Jayadratha abducted Draupadi. The Padavas rescued Draupadi and were returning in the company of Rishis and Saints. Rishi Markandeya narrated the story of Sati Savitri and Satyavan. Draupadi, one of the 5 pious women (Pancha kanya), was especially chosen to hear this story. From this we can understand the importance of Savitri.

fairies and nurtured in the atmosphere of the best of manners

The powerful and just king of Bhadradesh, Ashwapati was blessed by Goddess Savitri with a beautiful daughter. The proud father named the baby as Savitri in honour of the Goddess who had bestowed the kingdom with a princess. Ashwapati was an ideal King famed in the art of governance. The princess was taught all the best of values as are required by a lady. Also, being the only child, she was taught the martial arts of Kshatriyas and trained in the manner fi for a king. Pure of heart like a Rishi, beautiful like an Apsara and the nobility acquired in the process of attending King’s Court; the mixture of these 3 attributes made her the darling of the Maharishis. Her reputation was so awe inspiring that princes hesitated to ask her hand in marriage. So finally Savitri was granted permission by Ashwapati to seek and choose her husband.

One day Devarishi Narad called upon King Ashwapati. While they two were conversing Savitri returned from her quest to find a husband. She paid obeisance to Devarishi Narad, and her father, the King. Narad looked at the princess and asked the King whether her marriage has taken place. The King replied that even he wanted to know the outcome of her quest.

Savitri narrated that ‘In the Kingdom of Salva there is a popular King named Dyumatsen. Misfortune struck the royal family when the king was struck blind. The King’s son was very young. Seeing the favourable circumstances the neighbouring King usurped his Kingdom. King Dyumatsen retired to the forest with the queen and the prince, and proceeded to live a life of austerities. It is in this forest that i saw the prince Satyavan and decided that he will be my husband.

Narad said that He was familiar with the tragic story of the King of Salva. He said that because the parents of Satyavan were truthful the Brahmins had named him Satyavan (Truth abiding). Narad then cautioned Ashwapati against letting Savitri wed Satyavan. He said that Satyavan was not destined to live beyond the following year. But the brave girl Savitri was undeterred even after knowing of the impending death of Satyavan. Seeing this Narad said ‘King Ashwapati, your daughter is brave. Her mind is fixed. She will not be shaken from her decision. Satyavan however possesses excellent qualities. No other prince is as good as him. Therefore even I feel that this marriage can take place.’

And thus one fine day her marriage was solemnised with Satyavan.

After coming home to Satyavan, Savitri removed all her ornaments and her expensive finery. Everybody was pleased by this act and her sweet demeanour, readiness to serve and self control. She also showed great love towards her husband. Time passed quickly.

Savitri was counting each day. The words of Narad were ringing in her ears. When she came to know that Satyavan was destined to die in 4 days time, she started her prayers and penances. The night before the death of Satyavan she passed without sleeping. Next day at dawn, after her morning rituals and morning chores, she gave sacrificial food to the Fire. Satyavan got ready to go to the forest with a hatchet to gather fruits and sacrificial wood. Savitri also took permission of her in laws and accompanied Satyavan to the forest.

While working in the forest Satyavan suddenly said to Savitri that he felt tired and that he felt like sleeping. Satyavan placed his head on her lap and went to sleep. Suddenly she saw a man wearing red clothes and wearing a crown on his head. His eyes were red. He had a noose in his hand and he was looking fearsome. He stood near Satyavan and started looking at him. Seeing this Savitri placed Satyavan’s head on the ground and stood up. Her heart was thumping. She addressed the man and said ‘You seem to be some God, could you please tell me who you are and what do you intend to do here’.

Hearing this the Deity said “Savitri you are faithful to your husband and a religious lady. Therefore I will speak to you. I am Yama – the God of Death. Satyavan is dead. I personally have come to take his soul away since he lived a very virtuous life.” Thus, Yama removed a figure about the size of a thumb from Satyavan’s body and proceeded southward. Savitri too got up and followed Yama with a heavy heart.

After going some distance Yama was surprised to see her following him. He said “Savitri you must go back. Return and perform his post death rites. You are free from serving your husband. This is as far as you could travel with your husband”. Savitri said “Yamaraj, I have to go wherever my husband goes or wherever he is taken; this is my Dharma. Because of the devotion to my Guru, love i have for my husband, obeying the vows of penance and due to your blessings I cannot be stopped anywhere”.

Yamaraj was pleased to see Savitri’s devotion and her desire to uphold her Dharma. He told her “with the exception of the life of your husband you can ask for anything that you like”. Hearing this Savitri immediately asked Yamaraj that Dyumatsen’s sight, power and brilliance be restored. Yama was amazed with Savitri’s noble thinking. He thought ‘she used her boon for her father-in-law. How selfless she is’. Yamaraj said ‘Tathastu’ (so be it) and asked her to go back.

Savitri did not stop there but she continued to follow Yamaraj. When Yamaraj asked her again to return to her in-law’s she told “wherever my husband resides I should be there. Besides the company of holy man for even one time is very auspicious to a person. Better than that is the friendship developed with him. Always being in the wise company never goes fruitless. Therefore one must be always with holy or pious men”.

An impressed Yamaraj asked her to choose any boon with the exception of Satyavan’s life. Savitri immediately asked for the father-in-law Dyumatsen’s kingdom to be restored to him and that he should not forsake his Dharma. Tathastu, uttered Yamaraj and asked her to go back. Yama was thinking about her absolute faith in Dharma and how she wished her father-in-law should govern his Kingdom by observing religious tenets.

As he was thinking thus, Savitri continued following him. She said ‘You control all your people with laws and you give them their desired fruits also. Therefore you are known as ‘Yama’. Therefore please listen to what I have to say “One’s mind, speech and karma or duty should be used to live peacefully with others. So also to be kind to everyone and also donating to a worthy cause is the eternal religion of good hearted people. This is how most of the people try to live. All people behave civilly as much as they can with others, but those people who are good and kind and valorous not only behave well with their own people but they also behave kindly towards their enemies”.

These wise words of Savitri moved Yamaraj who told her to seek a third boon. For the third boon Savitri asked for her father to be bestowed with a hundred sons. Yamaraj also bestowed this boon on her father and asked her to quickly return. Savitri had firmly decided to go along with her husband and she knew that her in-laws and parents should not be left without children to carry on their legacy. Truly a daughter is an asset to two homes (her parents’ and her in laws)!

After going some distance Savitri said to Yamdharmaraya, ‘The journey is pleasant and untiring as long as i am in the company of my husband. On the contrary my mind is running away. Therefore please be kind enough to listen to my talk. You are a heroic son of Vivaswan (Sun). You judge people equally without making any distinction between friend or enemy. Therefore all people live observing the tenets of Dharma. And therefore you are called ‘Dharmaraj’, the king of Dharma.

A very pleased Yama told Savitri to ask a fourth boon with the except of Satyavan’s life. With this boon Savitri asked for 100 powerful sons who could continue the lineage of her family.

Since this was the first time that Savitri had asked something for herself, Yamaraj was pleased that finally she may leave and immediately granted the boon. He firmly told her to return saying that she had come too far.

But Savitri continued going with Dharmaraj. She continued the talk. She said a Satpurush is always centred around Dharma. He does not become unhappy or sad ever. The meeting of such Satpurush and their talk is never futile. The Satpurush with the strength of his powerful virtue can even attract the sin. His penance is capable of controlling the earth. The Satpurush never regrets his behaviour. This good virtue is practiced by Satpurush or Saintly people. Such Satpurush or Saintly men do good to others and never expect anything from them in return.

Hearing these words the son of Surya, Yamaraj was happy and said Tathastu! He released Satyavan’s soul from the noose and said, ‘Behold, your husband free to returm. Now he will remain always healthy. All his wishes will be fulfilled. Both of you will live for 400 years. By performing all religious and Kingly duties he will attain fame in all the three worlds.

Yamaraj turned and started to go. Savitri paid obeisance to him and thanked him profusely for blessing her with all the boons.

After Yamaraj departed Savitri returned to Satyavan’s body and replaced his head on her lap. After a while Satyavan stirred and sat up.

The chaste, noble and pious Savitri brought back the life of her husband by talking spiritually and religiously with Yamaraj. Today many Hindus amongst us do not understand or believe in afterlife & the journey to Parlok. They also do not understand the nuances of spiritual matters. They say such things do not exist. However even if some understand there is no way of experiencing them.

In this story however the most virtuous and the most chaste and pious lady Savitri brought back the life of her husband from dead. Hail the great Savitri who has found place in the hearts of all pious Hindu ladies for eternity.