Note : Andhra Pradesh government in India has also decided to demolish ISKCON Secunderabad temple for Metro Railway project. We request all to participate in the online signature campaign to protest against this move by Congress govt.

As per the news reports published recently in many newspapers and websites (click here to read), Russian Government is going to demolish ISKCON Temple in Moscow, the only Hindu temple in Russia. Hindu Janajagruti Samiti (HJS) has lodged its protest against such move by Russian Govt. with Russian Embassy and we have also urged Prime Minister of India to take this issue with Russian Authorities to stop demolition of only Hindu Temple in Russia. Now it is duty of all devout Hindus worldwide to protest lawfully against unrighteous move by Russian Govt.

Note : Anyone can send their lawful protest to concerned authorities directly through Comments Section on HJS Website. 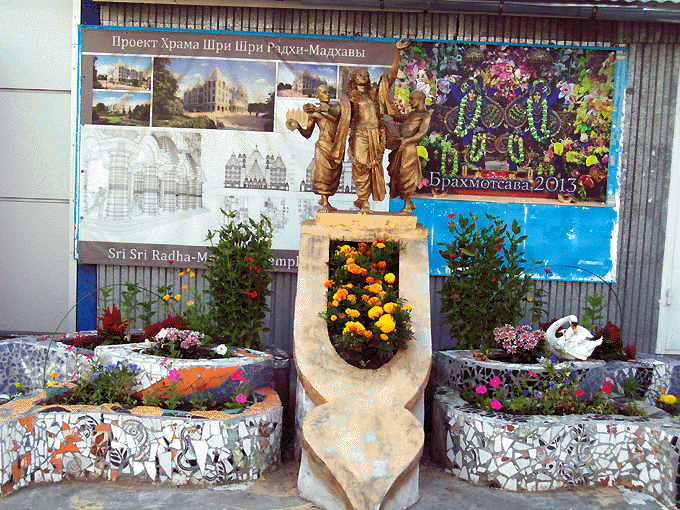 Note : Anyone can send their lawful protest to concerned authorities directly through Comments Section on HJS Website.

Russia : The temporary site where Russian devotees of the Hare Krishna Movement or ISKCON pray is likely to be demolished, Krishna.ru, a site run by Russian ISKCON followers said.

The movement has faced several bureaucratic hurdles in its quest to have a permanent structure to conduct its religious activities. When the ISKCON temple situated near the Begovaya metro station (in the centre of Moscow) was demolished in 2004, the Moscow government allotted land for construction of a new temple at the Leningradsky Prospekt (north of Moscow). This land was subsequently taken away.

In 2006, the Moscow government promised to build a temple in the Molzhaninovo district (10 km from the Moscow ring road) as part of the joint declaration signed by the Moscow and New Delhi governments. A Russian Orthodox Church has since been built in Delhi.

Despite all clearances for the project for the temple to be built in Molzhaninovo, the Moscow government cancelled the project. The authorities of the Northern administrative district of Moscow have also threatened to demolish the temporary site where Moscow-based ISKCON followers pray.

Moscow is believed to have 20,000 followers of the ISKCON movement.

After many so many past close calls and demands for closure, with many previous demands for closure delayed, the final decision was made by the Moscow government, city officials and the courts, ordering the ISKCON Moscow temple closed in a brief ten's days time. An impossible feat.

The Moscow devotees are ordered to immediately vacate the original Moscow land given to them by the Moscow government to build their temple. It was a gift to them, but was revoked/canceled by them). Now, four days ago, the final court decision has brought this drama to a sad end for ISKCON Moscow. The ISKCON Moscow temple must leave its current, formally donated location.

This has come as a complete unexpected surprise to the Moscow ISKCON devotees, who were not at all given enough time to move from there by officials. There are many temporary structures and Temple altar/kitchens there. Moving is a costly and time consuming task, which will take many weeks to do. Ten days is not enough time warning time given to ISKCON Moscow. This is tragic, inconsiderate and awful. 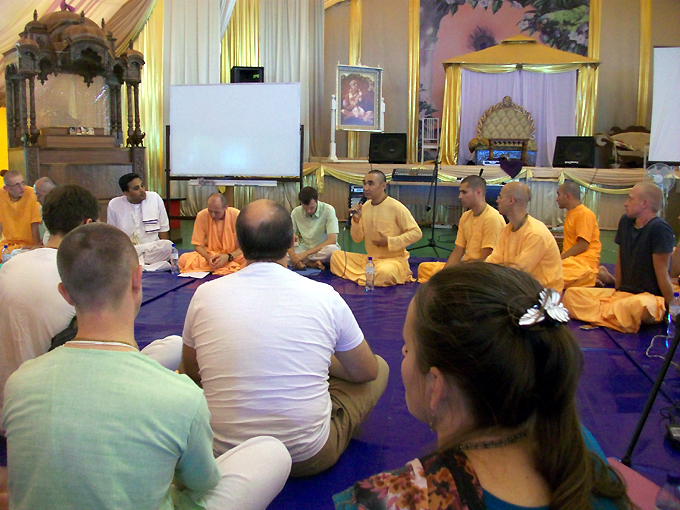 Suddenly, an unannounced government official came to the temple to deliver the final irrevocable court decision to end Moscow ISKCON Temple's right to exist there. It is an extreme order for them to vacate the temple within the next ten days time, or to face certain extreme actions from the city officials against them.

To make matters even worse and insulting for the Russian devotees, Moscow ISKCON will now sadly face a 7 million ruble fine, and also bulldozers to knock down the temple building and its brahamacari ashrams and temple offices. There is also a huge, expensive pandal adjacent to the temple, a professional tent used year round for many visiting gurus and seniors devotees as well as important huge festivals, now also in danger of being destroyed by the city officials.

This comes at the same time when, in just a short time, the biggest festival of the Moscow Russian Yatra is to be held: Sri Krsna Janmastami and Srila Prabhupada's Appearance day programs will be crippled severely, as there will be no place now to hold it.

The ten day ultimatum to vacate the temple and move out is an impossible deadline, as more time will be needed to dissemble the massive tent and buildings, what to speak of relocating the presiding Deities, Sri Sri Dayal Nitai Sachi Suta, Sri Sri Gaura Nitai Dieties Who will be rendered homeless soon by this heavy action, suddenly and ruthlessly enforced by the Moscow City government officials.

At this time, I ask ALL ISKCON Temples and devotees to search their hearts and souls and understand how serious this is, and how Srila Prabhupada would have expected actions and help from our entire ISKCON Society for Moscow ISKCON. Please understand the very great need now of coming forward and helping Srila Prabhupada's Russian devotees in their time of grave danger and need. It's a sincere call to rescue the ISKCON Moscow Temple project.

This is an URGENT appeal to all GBC members, and I humbly ask all ISKCON Temples, all over the world to come forward with help for Moscow ISKCON in this grave crisis situation.

Protest : Russia to demolish only Hindu temple in the country

As per the news reports published recently in many newspapers and websites, Russian Government is going to demolish ISKCON Temple in Moscow, the only Hindu temple in Russia by January 15, 2013. Hindu Janajagruti Samiti (HJS) has lodged its protest against such move by Russian Govt. with Russian Embassy and we have also urged Prime Minister of India to take this issue with Russian Authorities to stop demolition of only Hindu Temple in Russia. Now it is duty of all devout Hindus worldwide to protest lawfully against unrighteous move by Russian Govt.

Note : Anyone can send their protest to concerned authorities directly through Comments Section on HJS Website.

Subject : Request to stop demolition of the only Hindu temple in Russia,
the ISKCON temple and protect religious and Human Rights of Hindus in Russia

This is in context with the news in the media about the demolition of the  Hindu temple, the temple of International Society for Krishna Consciousness (ISKCON) that is going to take place by the 15th Of January 2013 that we wish to express our concerns.

We are very much upset and shocked to know about this. A temple in Hindu Dharma has a very great amount of significance. It is one of the means of Hindus to connect with God and is the centre of providing education about the religion to the Hindus. This is also a place where Hindus meet and collectively worship God. In short a temple in Hindu Dharma is an indispensable aspect of religious practice and would not be wrong to say that it is a lifeline of Hindus. So also a temple emits saatvic (pure) vibrations which helps in purifying the environment and thus benefiting the country at the subtle level

In such a situation the demolition of the Hindu temple in Russia gains serious importance. This is very serious issue of hurting religious sentiments and encroachment on human rights and the freedom of right to religion. Every country has their laws but in case of religious matter the spiritual dimension and the emotional aspect have to be taken into consideration. In fact if one creates an environment helpful for worship in temples the country will receive blessings of the deity which will benefit the country at large.

In fact India and Russia have shared very good relations till date and have respected each others culture and religion. This act is going to create a strain in the pre existing good relations between the two countries and misunderstanding and give a very unwanted message to the people of the world about Russia and make them feel insecure.

We hereby request the Russian government to intervene in this matter and stop the demolition of the Hindu temple in Russia and reassure the Hindus in Russia and the world over.

We are looking forwards to a prompt and positive response at your end.

New Delhi : A year after Russia sought to ban the Bhagavad Gita, the Iskcon Krishna temple in Moscow is facing closure by the Russian government. By January 15, 2013, Iskcon monks said their Moscow temple, the only Hindu temple in Russia, would be demolished by the city authorities.

As Russian President Vladimir Putin arrives on Monday for a day of talks with the Indian government, the temple issue is likely to figure in the discussions, not least because the issue has been pursued by the foreign ministry.

Indian ambassador to Russia Ajai Malhotra has asked the Moscow authorities to give an extension to a temporary temple which is set to expire on December 31, 2012, until they complete the construction of a Vedic cultural centre. Asked about the proposed demolition, Russian ambassador to India Alexander Kadakin dismissed fears of demolition.

However, Iskcon monk Madanmohan Das said the demolition order has not been revoked, so the temple is due to come down in January, because the authorities said it "violates the urban building code" and has no legal grounds for existence.

In a statement, the temple officials said they feared that even the permanent temple would face the axe. "A source in the Moscow mayor's office said on condition of anonymity that Mayor Sergey Sobyanin also ordered to axe the permanent temple project, which Delhi chief minister Sheila Dikshit and previous Moscow mayor Yuri Luzhkov had included in a joint declaration in 2006 as a symbol of cultural cooperation between the cities. Following the declaration, Indian ambassador Ajai Malhotra laid the cornerstone for the new project earlier this year," the statement said.

This year, Russia plans to push for land from the Indian government for a Russian orthodox church in Delhi. In 2004, Moscow's Iskcon temple was demolished and the Iskcon group was offered another plot to build a temple. Reports said the offer was withdrawn after Russian orthodox church members protested against the temple building plans.

Last year's Bhagavad Gita trial had brought Lok Sabha to its feet and in a rare move, Parliament had collectively asked Russia to prevent the ban. The latest issue of demolition promises to put another wrinkle in the bilateral relations.