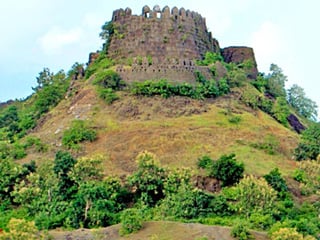 Mahur village, also called Mahor, is 40 kms north-west of Kinwat town in Nanded district in the Marathawada division of Maharashtra.  Earlier Mahur was a big city and a Suba of southern Berar. Situated on an eastern branch of Sahyadri Mountains, the hill fort here is very old and exists at least from the time of the Yadavas. It was subsequently occupied by many ruling powers – the Gonds, the Bahamanis, the Adilshani and the Nizamshahi rulers and finally the Mughals and their vassals. The fort on its three sides is girded by the Painganga River.

The Mahur fort  is built on top of two adjoining hills, was protected by walls, ramparts and bastions.  It had two main gateways – one on the southern side and the other on the northern side. The northern gate is still in a reasonably good condition, and so is its southern rampart nearly five metres wide. The fort had a palace, a mosque, a granary, an armoury, etc., now all in ruins. At the centre of the fort, there is a big tank call Ijalatalav.

Being situated on the main route from the north to the Deccan, Mahur has a long history. There is evidence to show that Mahur, ancient Matapur, was an important place at the time of the Satavahanas and the Rashtrakutas.  The Renuka temple on an adjoining hill was built by the Yadavas. After remaining with the Gond rulers for sometime, Mahur passed on to the Bahamanis in the 15th century and was made a Suba. In the 16th century, Mahur, being strategically placed at their centre, faced a lot of fire from the infighting between the Nizamshahi, Adilshahi and Imadshahi rulers. Then in the early 17th century, Mahur became a part of the Mughal Empire and came to be ruled by their Subedars. When Shahjahan rebelled against his father Jahangir, he took refuge in the Mahur fort along with his wife and children, including 6 years old Aurangzeb.

About 2kms from Mahur bus-stand, there are two Elephant type (situated on an island near Mumbai) rock-cut caves of the Rashtrakuta period.