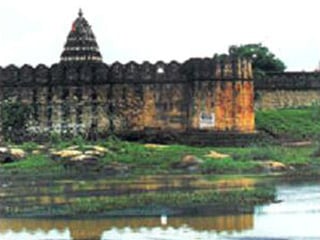 Situated in Chandrapur (old Chanda) district of Maharashtra, all the three forts are of tribal origin.  Ballalpur, now known for its coal mines and paper mills, is 16kms south-eat of Chandrapur, the district headquarters, Ballalpur was the capital of the Good king Khandakya Ballalshah during 1437-62 AD.  The land fort that he built here on the eastern bank of the Wardha River is square in shape with walls and bastions.  There are still two intact gates set at right angle to each other.  There is also a small postern gate on the river side.  The fort walls are still intact, but all the old buildings are in total ruins.

The credit for establishing Chandrapur also goes to Khandakya Ballalshah.  When the capital was shifted from Ballalpur to Chandrapur, the Ballal kings built here an extensive land fort with high walls and bastions.  The fort had at its four cardinal points four impressive gates.  The original buildings have vanished, but the gates and a portion of the wall still exists.  Chandrapur was annexed by Raghuji Bhosale of Nagpur in the middle of the 18th century.  Finally the fort was captured by the Britishers in 1818 AD.  Now an industrial town, Chandrapur is also famous for it’s old Mahakali temple.

Manikgarh, made famous by a newly established cement factory near by, is about 35kms south-west of Chandrapur.  Built by tribal Naga kings in the 9th century, the Manigarh fort stands at the height of 507 metres above sea-level.  It was strongly fortified with walls and bastions.  There were several tanks and buildings inside the fort.  Today, the fort is in complete ruins and has become a sanctuary for wild animals.  A pukka road through a dense forest leads very close to the gateway of the fort.  Nearby is an old temple of Vishnu.