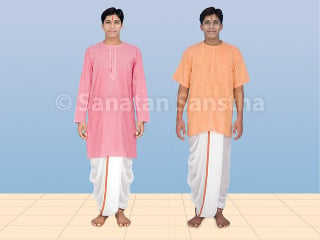 Hindu culture is enriched with Chaitanya (Divine consciousness). After studying various attires at the gross as well as the subtle levels, that is, by taking into consideration the spiritual perspective, Hindu Dharma has given importance to attires such as dhotī–kurtā. Instead of just thinking superficially about good looks and ease of wearing clothes, comprehensive and in-depth thought has been made by Hindu culture such as enhancing sāttviktā of the wearer, protection from negative energies, ability to imbibe Chaitanya and whether it aids in the efforts for God-realisation. In this article, let us understand the benefits of wearing a dhotī and a kurtā.

Dhotī is a rectangular piece of unstitched cloth, usually around 4-5 metres long, wrapped around the waist and the legs and knotted at the waist. It is made from a continuous thread of cotton. Natural thread has sāttviktā and Chaitanya. Since the thread used in a dhotī is continuous, its sāttviktā and Chaitanya also remains in the dhotī in a continuous state and gives similar benefit to the individual who wears it. Upon wearing a dhotī, due to its pleats and fold at the back, Chaitanya is created around the body. Hence, the individual is protected from the Raja-Tama-predominant environment and distressing energy emanating from the Pātāl (Hell region), resulting in reduction in distressing energy covering around the body.

The numbers in the table given ahead denote percentages. 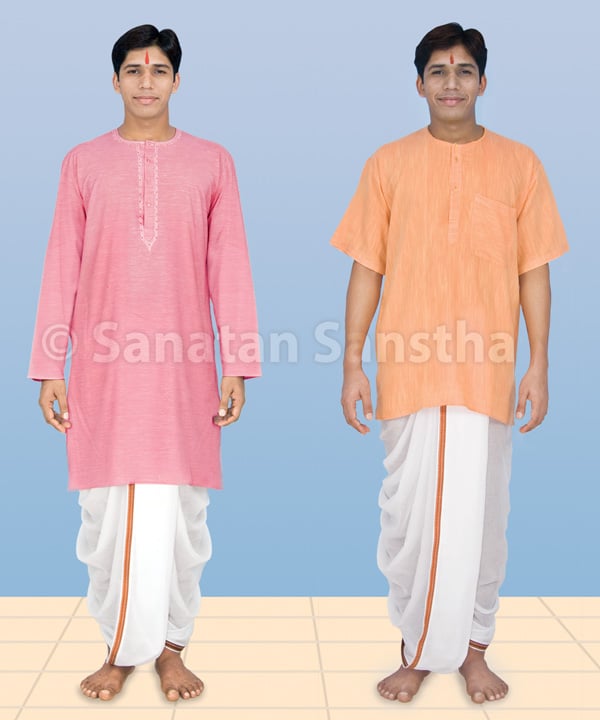 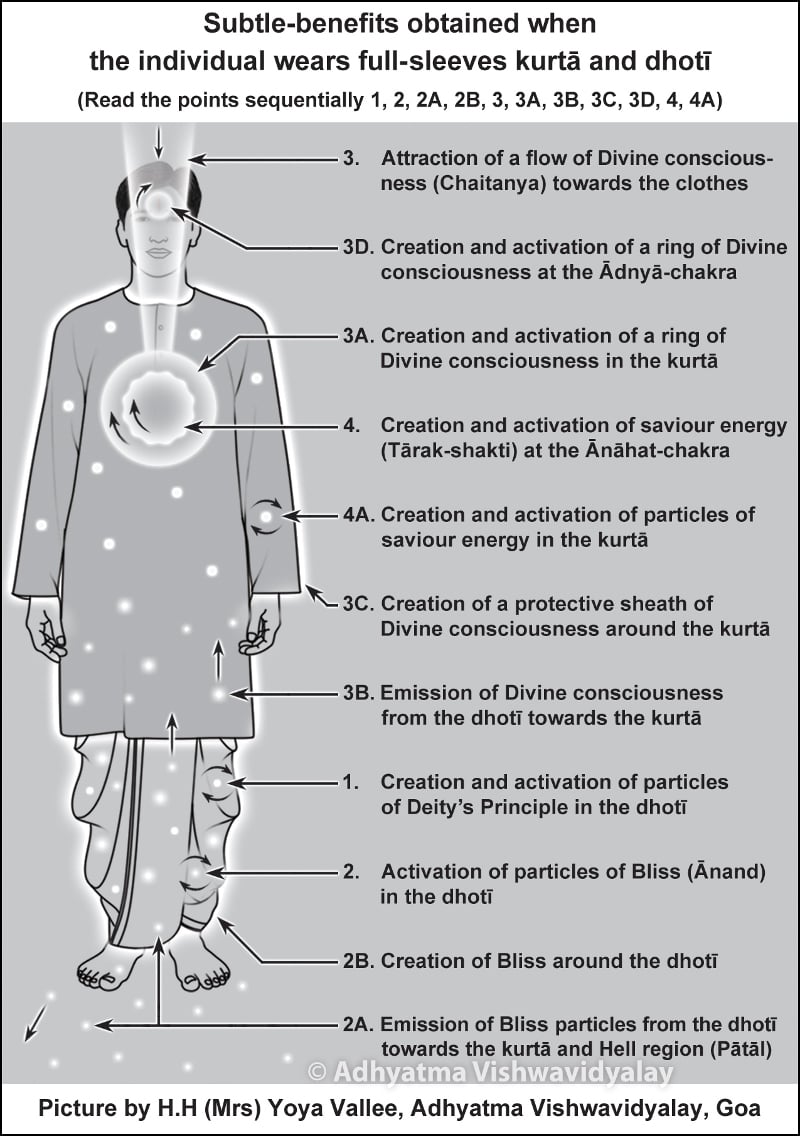 4. Effects of wearing dhotī–kurtā on a

Experiments were conducted on some seekers to study the effects of various factors such as diet, attire, music on the Shatachakrās (Kunḍalinī-chakrās [Centres in the spiritual energy flow system]) of an individual, with the help of a scientific method known as ‘Electrosomatographic Scanning Method’. Another experiment was also conducted to study the effects of western and Hindu attires on the Shatachakras of the seekers. Given ahead is the thought process and experiences of a seeker during the experiment in his own words. This seeker was suffering from severe negative energy distress.

4A. Points perceived after wearing a dhotī

4A 1. Perceived that the sanskār (Subconscious impressions) of wearing a dhotī had existed on my mind from previous births

Upon wearing a dhotī I perceived that ‘I was used to wearing a dhotī since many births. This is not new to me. I realised that this sanskār of wearing the dhotī had existed on my mind from previous births.

4A 2. Upon wearing a dhotī, felt that something is amiss

(The māntrik [A subtle-sorcerer] put these thoughts in the seeker’s mind to cause distress to him. – Compiler)

4B. Distress caused upon wearing a dhotī

4B 1. After wearing a dhotī, I went around telling everyone ‘I have worn a dhotī’, in the process babbling like a child. I actually felt like a child at that time. I realised that this state was a manifestation of the māntrik’s child-like state.

However, upon actually wearing dhotī-kurtā, some seekers said to me, ‘You look like a grown-up individual’, while others opined, ‘Your childish behaviour has lessened.’

4B 2. Rumbling in the abdomen increased and I felt that something was getting discharged from the anus.

(Due to dhotī-kurtā, the seeker was subjected to spiritual healing, and hence, he was feeling something being discharged from the anus. This was a sign of discharge of distressing energy from the anus. – Compiler)

4B 3. Thereafter, while performing sēvā (Service unto the Absolute Truth, that is, God Principle) on the computer, the proportion of excruciating pain in my knees increased.

4B 4. Proportion of itching sensation around the penis increased and I felt as if something resembling worms are crawling in the region.

4B 5. There was a generation of heat in the body, and I started feeling hot. (In fact, it was winter and until the previous day, I was feeling cold. Later, I learnt that other seekers too were suffering from similar distress.)

4B 6. Body ache increased, as also the extent of sleep.

4B 7. I started feeling that sooner the experiment ends the better it will be, to enable me to get rid of the dhotī.

4B 8. After six hours, I was almost in tears, as I felt excruciating pain in my legs and felt like taking off the dhotī.’

4C. Conclusion : When the seeker with severe negative energy distress wore a sāttvik attire in the form of the dhotī-kurtā, the seeker suffered various types of distress such as severe pain in the knees, itching, body ache, cough. The manifestation of distress in the seeker in a way amounts to its reduction. It is thus clear how attire such as dhotī-kurtā is useful in reduction of negative energy distress. However, some people who suffer from negative energy distress avoid wearing such attire thinking that it would cause them additional distress. This is inappropriate. Such people should stick to the attire with the firm faith that though the attire may initially cause distress, the sāttviktā in it will reduce the distress faster, and that their welfare lies in wearing a sāttvik attire.

5. Distressing experiences of seekers with

Māgha Shukla 5, Kaliyug Varsh 5110 (31.1.2009) was the ‘Pragaṭdin’ of H.H. Bhaktaraj Maharaj (Day on which He was named ‘Bhaktaraj’ by His Guru). I wore dhotī-kurtā on that day. Immediately afterwards, I began to feel drained. I could wear these clothes only till 5 p.m. Thereafter, I started feeling very uneasy and I irately took off the dhotī-kurtā and wore pant and shirt in its place. I felt much better then. From that day onwards, I have avoided wearing dhotī-kurtā. I felt that I should not give this article for publishing. One seeker forced me to write this down. However, it enraged me.

I had strong aversion to wearing dhotī-kurtā over the past seven years. The very sight of these clothes made me restless, made my blood boil. However, from August 2007 onwards, I began to wear these clothes. I attributed this change in my attitude, to the spiritual healing sessions I had been attending, over the past 3 months. They reduced the māntrik’s control over me.

(From both the above mentioned examples, it is evident that the seekers who have severe negative energy distress display their anger towards dhotī-kurtā. Māntriks have strong aversion to the sāttvikta in dhotī-kurtā; hence, they express their anger. – Compiler)

6A. Upon wearing dhotī-kurtā for a week, there were no external attacks of negative energies and therefore, no burning sensation on the feet and due to the elimination of distressing energy from the body, experienced cool and hot sensation on feet

From Āshādha Shukla 13, I began to wear a dhotī and a white kurtā everyday. Since that day, I have not experienced burning of my feet even once. Earlier, I could not bear to place my feet on the ground because of burning sensation. (I could not bear the sāttviktā of the Ashram ground.) I experienced one more difference while wearing a dhotī. My calves experienced hot as well as cold sensations while in a dhotī. On the legs, where the border of the dhotī comes into contact, I experienced cool sensations; whereas, there were hot sensations on the upper part of the leg. The dhotī supplies positive energy to the body and therefore, distressing energy is expelled from the body. Hence, cool as well as hot sensations can simultaneously be experienced in the calves, making it possible to place the feet on the ground.

6B. Wearing dhotī-kurtā results in maintaining communion with God

‘I wear dhotī-kurtā every day. A thought crosses my mind that in the ancient times, Deities used to wear such clothes.

These thoughts help me maintain communion with God.

On the morning of Phālgun Krushṇa 2, Kaliyug Varsh 5110 (12.3.2009), the negative thoughts in me had increased considerably. I could not even pray and chant properly. I finished all the morning chores in this state and got ready for sēvā. While I was about to change my attire, a thought crossed my mind that I should wear dhotī-kurtā. Surprisingly, no sooner did I wear this attire, my thoughts underwent complete transformation. I felt cheerful and calm. It was H.H. Dr. Athavale Himself who had performed spiritual healing on me, by not only inserting in my mind the thought of wearing dhotī-kurtā, but also making me implement it, thus effortlessly pulling me out of abyss of negative thoughts. For this grace bestowed upon me, I offered gratitude unto His Holy feet. Earlier, I used to feel a little embarrassed to wear dhotī-kurtā. However, after this spiritual experience, the embarrassment went away, and there was an ease in wearing these clothes.

6D. Experiencing movement of a cool ring around the body upon wearing dhotī-kurtā

On 22.7.2007, ‘Dwijgaṇ Snēhamēlāvā’ (A gathering of boys whose thread ceremony has been performed recently) was arranged in the Ashram. I was one of the seekers assigned with the sēvā of taking those who had come to attend the Snehamelava around the Ashram. All seekers who were assigned this sēvā had worn dhotī-kurtā. Upon wearing this sāttvik attire, I experienced that a cool ring was moving around my body. I was feeling very enthusiastic till the night.

(As per the principle that ‘A good object is attracted towards another good object’, Chaitanya is attracted to sāttvik attire. The seeker could perceive cool sensations and enthusiasm because he was experiencing vibrations of Chaitanya. – Compiler)

On the entire day and night of 20.1.2009, I had worn dhotī-kurtā. On that day, I felt light and happy. My chanting was smooth and I perceived that my mind was thoughtless for most of the time.

6F. Dhotī-kurtā worn by seekers who attended the marriage increased the Chaitanya in the environment, which resulted in increased feeling of respect and gratitude towards these seekers

On the occasion of Ms. Revati and Mr. Bharat Mirje’s marriage in April 2006, six to seven seekers of Sanatan’s Miraj Ashram wore white dhotī-kurtā. When these seekers came together into the marriage hall, Chaitanya was imbibed and emitted back into the environment by their clothes. At that time, I remembered the sāttviktā of Dwāpāryug (The third Era in the cycle of four eras since the origin of the universe), and devotion towards God of the individuals in that Era. A spontaneous feeling of respect and gratitude was generated in my mind towards these seekers from the Ashram. I could experience generation of divinity in them, and as a result, I felt I was surrendering unto their feet. I paid obeisance to them mentally (in the subtle). I felt very calm then.