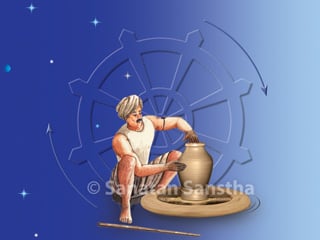 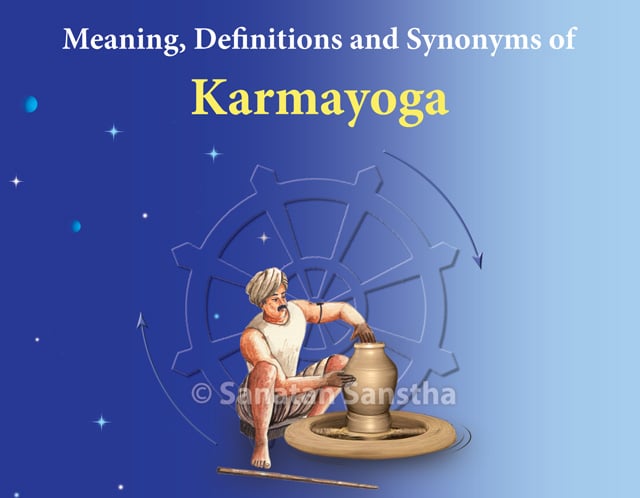 The word ‘Karma-yoga’ (Path of Action) conjures images of those giving alms to beggars, setting up educational institutions, and those engaged in social service. However, in most cases, since the activities are at an emotional level or for the sake of publicity, it does not constitute Karma-yoga in the real sense of the word. Performing that karma which will result in spiritual growth and, ultimately, God-realisation, denotes Karma-yoga. Even if the karma were to be worldly, performing it in a way such that no new sanskar (Subconscious impression) is created on the chitta (Subconscious mind) and thereby getting freed from the bondage of sanskars forever is the objective of Karma-yoga. Performing karma as expected by the Hindu Dharma and the scriptures, by sacrificing the attachment and the expectations of the fruit, is a supreme definition of Karma-yoga.

A. Karma is the essence of human life. Knowing the importance and peculiarities of karma changes our attitude towards karma and we get exposed to a new dimension to perform it. When compared with Dnyanyoga (Path of Knowledge) and Bhaktiyoga (Path of Devotion), Karma-yoga is associated more with practical life. Karma-yoga meaning is described as follows.

Meaning : Your right is to perform karma only; but never to the fruit thereof.

In this blessing of Shrikrushṇa lies the essence of Karma-yoga.

Karma-yoga also teaches that even after God-realization, instead of renouncing karma, the activity of drawing g society towards sadhana (Spiritual practice) has to continue.

Meaning: Yoga is the skill in performing karma.

Implied meaning: Performing karma with an intellect devoid of any expectations, so as not to get affected by the fruit of karma. Only when there is no fruit of karma, an individual is liberated from bondage.

A. A Path that provides knowledge on why man performs karma, why karmas entrap in bondage, how to perform karmas without getting entrapped in bondage, which are the karmas that liberate a man from worldly bondage (that of Maya [The Great Illusion]), the importance of performing karma even after becoming Jivanmukta, etc., guides on how to abstain from performing wrong karma and on performing the right karma (so as to eventually attain Moksha [Final Liberation]) is termed as Karma-yoga.

B. When our tendencies gradually change from Tama-predominant to Raja-predominant and then get stabilised in Sattva, and further culminate in bhav (Spiritual emotion), our penance becomes special. This itself is called Karma-yoga.

B. Path of karmasanyas (Path of Smart)

The Path of Smart means Path advocated by the Smrutis. Traditionally however, it has come to be known as the Path of karmasanyas (Renunciation of karma). 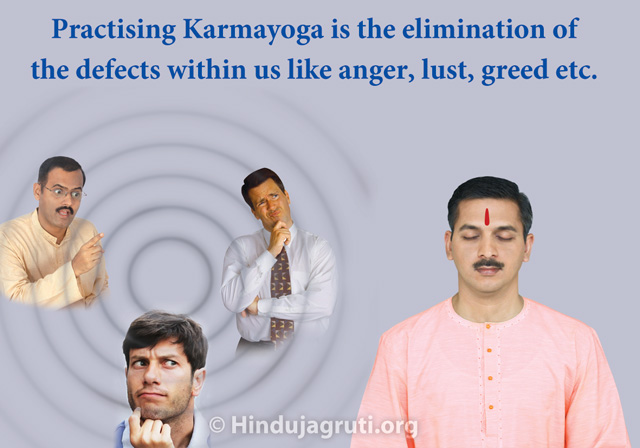 Karma plainly means an action or a deed. It is not limited to just physical actions like eating, drinking, walking, laughing, etc., but also includes all karmas performed by the five sense organs, five motor organs, mind and intellect. Karma-yoga means to keep performing that karma which will result in our spiritual growth, and thereby we will eternally be associated with Brahman or God. In short, getting liberated from the cycles of birth and death through the medium of action is Karma-yoga.

Karma is kriya dependent, while Karma-yoga is independent of kriya. It means that Karma-yoga is achieved not with kriya, but with vivek. This means Karma-yoga is not the mere performance of karma.

Practising Karma-yoga is the elimination of the defects within us like anger, lust, greed, etc.

Meaning : The one who performs karmas with devotion, who has conquered the five senses and the mind, is dear to all and all are dear to him. Even though he performs karmas continuously yet he does not get entangled in it, that is, he is free from the bondage of karmas.

A. Misconceptions about Karma-yoga due to lack of understanding the difference between karma and Karma-yoga

Meaning : Karma keeps a man entrapped in bondage, while knowledge liberates him from that bondage.

C. Karmas from Karma-yoga are not just any karma, they are those specified in the Vedas : In the present age, the Sanskrut phrase ‘योग: कर्मसु कौशलम्‌ |’ is interpreted as ‘Expertise in performing a karma is Karma-yoga’. The modern people feel that, performing any karma expertly is by itself Karma-yoga. What then is the need to perform karma recommended by Vedas, they reason ? Be it a non-Vedic karma or a prohibited karma, having expertise suffices. That itself is Karma-yoga ! However, what does Shrikrushna say about it ? ‘कर्म ब्रह्मोद्‌भवं विद्धि’ meaning, karma originates from Brahman and Brahman means the Vedas. It simply means that karma advised by the Vedas is karma specified by Karma-yoga, and that precisely is Karma-yoga.

D. Performing karmas expertly that are not mentioned in the scriptures, is not the intent of the Karma-yoga : That which does not create bondage to karma is Yoga. Karma prescribed by the scriptures should be performed with such expertise that no kriyaman-karma is generated. Yoga is not meant for performing karma expertly that finds no mention in the scriptures. (Performing prohibited karmas like drinking, smoking, etc. in a stable state of mind is not Yoga). Yoga is meant for attaining Mukti (Liberation). A pleasant state of the antahkaran is the visible consequence of Yoga.