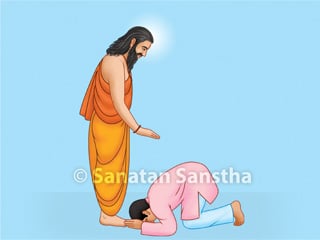 Every seeker in the primary stage has read that, in Spirituality, the ultimate means of salvation is a Guru, whereas a seeker in the advanced stage actually experiences it. Most seekers are unaware of what they should do to acquire a Guru. As a result, not only the present, but several future births are wasted. To be accepted as a disciple by a Guru, one needs to gain the grace of a Saint. However, for bestowal of the Guru’s continuous grace, one has to constantly earn His blessings. An easy solution to this is to do what Saints and Gurus expect, and that is, practice of Spirituality. This article illustrates various spiritual experiences obtained by the disciples after doing spiritual practice as prescribed by their Guru. 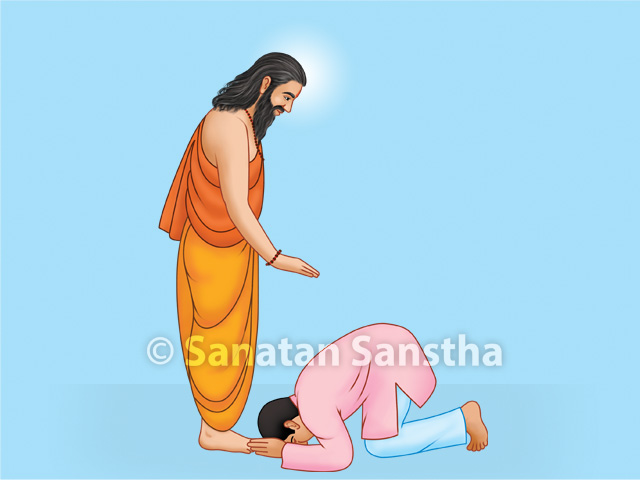 One disciple had a problem of stammering. He felt like conducting a spiritual discourse like his other gurubrethren. He told the Guru his difficulty and asked, “What is the solution to this ?” The Guru responded, “If you speak thinking that you are speaking, you will falter because of your stammering; however if you foster the spiritual emotion that ‘the Guru is speaking through you’, you will not stammer; because the Guru does not.” Later, when delivering the discourse; the disciple who otherwise stammered at every sentence, stammered only once or twice during the whole discourse.

2. Recovery from an illness

Getting cured by obeying the Guru’s directives : Once Ramjidada was sleeping as He was running high fever. When His Guru Anantanand Saish came to know of this, He said to Ramjidada, “Take a bath, your fever will subside.” Though Ramjidada was burning with fever He went to the well and as usual poured two to three buckets of cold water on Himself. Not only did His fever subside; but His exhaustion too disappeared and once again He felt refreshed.

3. Not experiencing fatigue in the Guru’s presence

An individual normally tired with four to five hours of hard work could work for fifteen to sixteen hours a day at a stretch, continuously for six to seven days in His Holiness Bhaktaraj Maharaj’s (Baba) presence and still not feel exhausted. Several devotees perceived spiritual experience of acquisition of Chaitanya (Divine consciousness) and Shakti (Divine Energy) in Baba’s company.

4. Spiritual experience obtained when the Guru is speaking

B. Absence of awareness regarding time.

D. Some enter a state of meditation.

E. One can decipher whether what the Guru speaks is just in humour or casual, or whether He is trying to teach something through it, only when one is at a very high spiritual level.

5. Inability to do anything without the Guru’s wish

Once when Baba visited His disciples, as soon as He arrived He said, “Serve me food.” One of the disciples said to Him, “Baba food is ready. Only the lentil for the curry is in the cooker. The curry will be ready within ten minutes. Then, I will serve You.” In response, Baba said, “Then serve Me yesterday’s curry.” The disciple thought to himself, “How can I serve stale curry to Baba ?” Half an hour elapsed saying “I will serve You now”; still the pressure cooker did not sound its whistle. Then, realising his mistake, he served Him the stale curry according to His wish. Later he found that the lentil in the cooker had remained uncooked !

In the 13th adhyay (Chapter) of the Gurucharitra the Guru tells the disciple, chanting God’s Name, ‘You have acquired the Guru’s speech’. This means, that from that moment onwards, all his actions – physical, psychological and verbal will be as approved by the Guru.

6. Inability to do anything without the Guru’s knowledge

Jiji (wife of His Holiness Bhaktaraj Maharaj) had financial difficulties since Baba did not give her money. Knowing this if someone gave Jiji a sari or any other gift without His knowledge, then Baba immediately used to tell Jiji, “Give me the sari and money that has been presented to you.” If Jiji made a fuss, then He used to shout and abuse to such an extent that finally she was compelled to give them to Him. Later, knowing this well, she used to surrender it the very first time that He asked for it. Through this, Baba taught His devotees that they cannot do anything behind His back, without His consent.

7. Getting rid of a disciple’s ego

In 1992, Gurupournima was celebrated in Mumbai. When preparations for it were on, off and on Baba used to ask whether the disciples needed any help. At that time, His Holiness Dr. Jayant athavale (His disciple) used to tell Baba, “We will take care of everything. Please do not worry.” The feeling behind it was that they would collect money and celebrate Gurupournima in a grand way. Later when Baba informed that “money was required for the construction of the Indore ashram” the disciples gave away all the funds collected for Gurupournima. After funds were collected again, Baba said, “Give me a part of the money that you will offer me as a Gurudakshina for Gurupournima, to dig a well at the Kanḍli ashram.” So they gave it to Him. Now that they had given away all the collected funds, Dr. athavale was worried as to how they would celebrate Gurupournima. However, He immediately realised that Baba had done all this just to get rid of the ego, “We will celebrate Gurupournima”. From then on both, the tension disappeared and the rest of the jobs were completed smoothly.

A traditional attire of Bharatiya women.