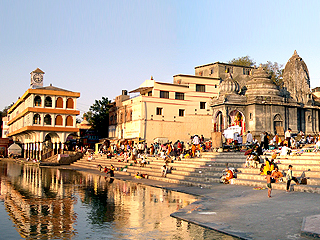 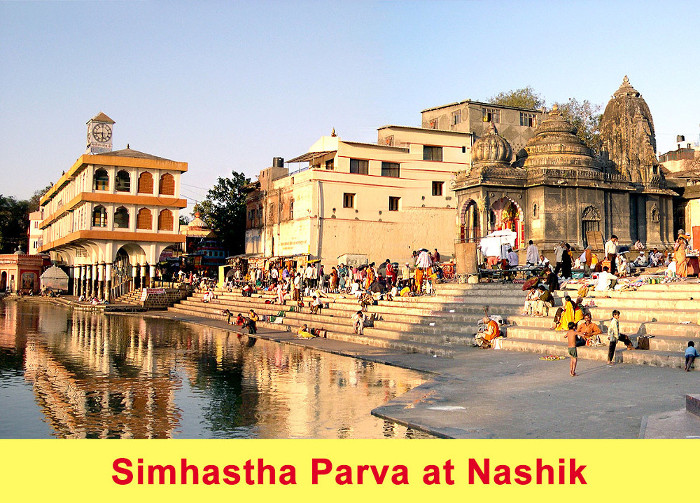 Kumbha Mela is the world’s largest religious fair. It is not only a display of supremacy of the Bharatiya culture, but is also a spiritual congregation that provides satsang. The Kumbha Mela held every 12 years at Prayag, Haridwar, Ujjain and Tryambakeshwar-Nashik on  the occasion of the Kumbha Parva has an important place in the Hindu civilization. The spiritual glory and cultural importance of the Kumbha Parva is unique.

During the Tryambakeshwar-Nashik Kumbha Parva, Guru and Sun both come in Simha (Leo) zodiac sign. In this state, a swift fl ow of strong Tej waves emitted by the two planets runs towards the earth. During this period, the Shakti in the form of Tej is activated (with the help of radiant waves) in the form of waves in the womb of the earth at this pilgrimage place. This radiant energy in the form of waves attracts the Tej waves emitted by Guru and the sun, which are now in Simha zodiac sign, and assimilates them in its karya-shakti (Energy for performing task). Taking advantage of this arrangement, Kumbha Parva is held at this auspicious pilgrimage place.’

These Holy places are situated on the banks of Godavari River in Maharashtra. Village of Tryambakeshwar is situated 36 kms from Nashik city, and the source of river Godavari is located in this village. The river Godavari then flows through Nashik city.

1. A. Origin and meaning of the word Tryambakeshwar

Implied meaning : Tryambakeshwar is the place whose presiding Deity is Deity Shiva, who has three eyes.

One of the twelve Jyotirlingas is situated in this place

1. B. Origin of the word Nashik and other names

In Tretayug, Lakshman cut off the nose of demoness Shurpanakha here; hence, it is believed that this city became famous as Nashik. The shloka given ahead mentions the names of Nashik in different Yugas.

Sage Gautam performed rigorous penance to wash off the sin of killing a cow and with the power of his penance, asked Bhagawan Shiva to send Ganga from Heaven to the earth. As a result, Ganga descended at Tryambakeshwar with the new name of ‘Gautami’ or ‘Godavari’. Godavari descended onto the earth when Guru Planet was in Simha zodiac sign. When there were only seven Gods, seven Sages and seven human beings on the earth, Gautami existed with them; hence, Godavari is respected as the fi rst and most superior river. The origin period of Simhastha Parva and Godavari is the same. Nashik-Tryambakeshwar are always referred to together, because Godavari originated in Tryambakeshwar and its bed widened in Nashik.

2. Significance of the Holy place

2. A. One of the five great Holy places

It is counted among the five great Holy places in Bharat. The shloka (Hindu sacred verses) in this regard is given ahead.

Meaning : There are five Holy places – Nashik, Prayag, Pushkar, Naimisharanya and Gaya. There is no equivalent sixth Holy place. 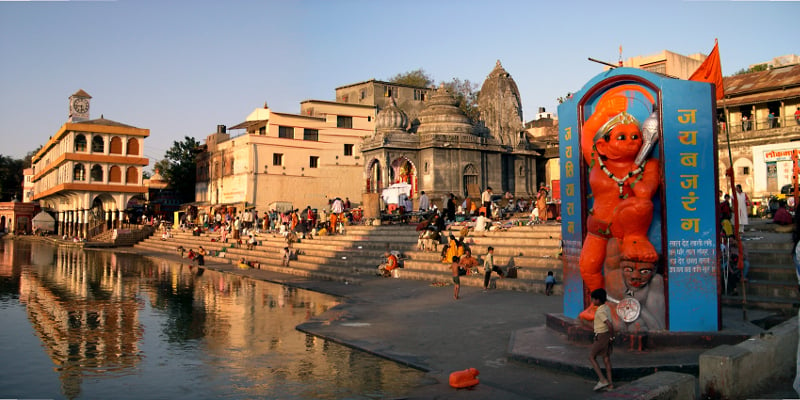 Meaning : By bathing in ‘Saptagodavar’, controlling the organs and eating less, one gets immense merits. Such an individual enters the abode of Gods after death.

3. The south-bound fl ow of Godavari is rare and Moksha-bestowing. Therefore, one gets merits by offering donations at this Holy place. This has been mentioned in ‘Kshetramahatmya’.

3. Darshan of the pilgrimage places

This is a very sacred lake. The flow of Ganga was obstructed by Sage Gautam with the help of ‘Kusha’ means darbha (A type of grass used in rituals); hence, the lake in Tryambakeshwar is called ‘Kushavarta’.

Once, the five sons of a Sage were unduly overwhelmed with the power of penance and laughed at the sun. The Sun cursed and turned them into five banyan trees. Hence, this place is called ‘Panchavati’. Later, they attained liberation by having darshan of Bhagawan Shriram.

One of the five heads of Deity Brahmadev was mischievous. Since it slandered Deity Shiva, Deity Shiva cut it off with the weapon ‘Krupal’. To get liberated from the sin of killing of Brahma’s head, Deity Shiva bathed in the Ramtirtha. Manifest-ation of ghosts, pishacha (Spirit of a deceased person) etc. and sins are destroyed by bathing in Ramtirtha. Devotees mainly take a dip in Ramtirtha (also known as Ramkunda) in Nashik, because the dip begets merits.

This tirtha is situated on the west bank of Ramtirtha of Godavari and immersing remains of the dead here is considered merit-bestowing. The bones immersed here turn into water in three and a half ghatakas (One ghatak is equivalent to 24 minutes hence, three and a half ghatakas mean 84 minutes)
(That despite releasing great amount of bones in this tirtha, they get dissolved in water is a slap in the face of the so-called scientifi cally-oriented people in the society who scoff at the Hindu scriptures. – Compilers)

When Jupiter as well as Sun are in the Leo sign, Nashik Kumbh Mela  takes place at Nashik-Tryambakeshwar. During this period, Rajyogi snan (Shahisnan) is taken during the Parvakal on 1. Shravan Krushna Panchami, 2. Shravan Krushna Amavasya, 3. Bhadrapad Shukla
Panchami (Only at Nashik) and Vaman Jayanti (Only at Tryambakeshwar). Apart from this, a special Parvakal exists during the auspicious occasions of Vaidhruti and Vyatipat.

4. A. Significance of Nashik Kumbh Mela

Meaning : When Jupiter is in Leo sign, all tirthas, rivers, seas, territories, forests and Ashrams exist on the bank of River Godavari
(in the subtle) for one year.

Meaning : When Jupiter is in the Leo sign, one must bathe in the Holy River Godavari from where it turns towards the southern direction in Panchavati kshetra.

Meaning : The amount of merits one gets on bathing in Bhagirathi (Ganga) for 60,000 years equals to one bath in the Godavari when the Guru planet enters the Simha zodiac sign (During the Simhastha Parvakal)

Meaning : The Sage tells the king, “My son ! When Jupiter enters the Leo sign, by bathing in the River Godavari (meaning Gautami),
sins of crores of births are washed away”.

We should perform Punyahavachan and Nandi-shraddha and bathe in the Godavari. Then, we should perform other religious actions like shraddha etc. and have darshan of Shriram situated in Panchavati. Maharshi Kashyap recommended that we should perform Pitrutarpana (Rituals for the departed ancestors) and shraddha etc. at Kushavarta in Tryambakeshwar during the Simhastha Parva. Therefore, we should proceed from Nashik to Tryambakeshwar and perform religious actions such as a Holy bath, shraddha etc. on Kushavarta and have darshan of Tryambakeshwar. We should then return to Nashik and again have darshan of Shriram in Panchavati, worship Godavari, offer Her arghya (Respectful offerings of water etc.) in the form of fruits. We should then make offerings to Brahmans,
tonsure our head and observe a salt-less fast. Here ends the ritual of Simhastha pilgrimage.

5. A. Importance of Mundan Sanskar (Tonsuring) during the Nashik Kumbh mela

Meaning : O, River Gautami (Godavari), I am tonsuring on your banks in order to purify myself and for the liberation of my ancestors.

5. B. Importance of donating Ghrutakumbha during the Nashik kumbh mela

Meaning : A Kumbha (made of copper), in which a gold Idol has been placed, which is covered with red cloth, fi lled with pure ghee (Clarified butter) and offering in cash is equivalent to donating 100 cows. I am donating such a Kumbha.