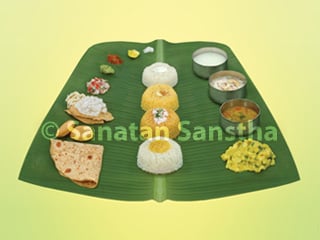 1. Hinduism eating meat – Why does a person

have a non-vegetarian diet?

It is said in Manusmruti,

Meaning: Since man has a natural inclination towards consuming alcohol, meat and copulation, having a desire for them does not amount to sin. But being free from the three is beneficial.

Another shloka in Manusmruti advises giving up all consumption of non-vegetarian food by looking at the origin of meat, the shackling and slaughter of animals for meat. All points elucidated in these shlokas are advice to Hindus by the religious texts.

The illusory vibrations emitted by the meat affect the mind of the person eating the meat.

3. Adverse effects of a

non-vegetarian diet as given in Hindu Dharmashastra

A. All people associated with meat are destructive / vicious in nature: It has been said in Manusmruti,

Meaning: One who promotes or supports non-vegetarianism, the butcher, one who sells or purchases meat, the one who cooks it, serves it or consumes it, are all destructive / vicious in nature.

B. A person who has a non-vegetarian diet does not attain happiness:

Meaning: One who slaughters non-violent, helpless animals for his own happiness never attains happiness when alive and even after death.

Manusmruti also says that, if a person consumes an animal’s meat on Earth, then that animal will consume the person’s meat after his death / in the other world.

As against this, Manusmruti says about those not consuming non-vegetarian food:

Meaning: One who does not have a desire to shackle and slaughter animals, becomes the well-wisher of animals and acquires infinite happiness.

4. Adverse effects on man of the

One of the tenets of Dharma is – ‘A diet made from slaughtering another being destroys all the virtues in the person consuming it.’ Due to the adverse effects of the Tama-predominant waves in non-vegetarian diet, the Sattva guna in the person is destroyed. Consequently, his benevolent thoughts are also destroyed and Tama-dominant, indiscretionary, violent thoughts originate or surface.

5. Subtle-effect on the walls of the

slaughter house, of the pain caused to animals

Scientists of Delhi University, Professors Manmohan Baj and Vijayraj Singh went to a Russian slaughter house and studied the effect of the suffering of the subtle bodies of the beings slaughtered there. They say that, inflicting blows on the animals in the slaughter house generates broken waves of suffering in its stones. Through this example, the subtle-effects of slaughtering animals for meat becomes clear.

7. Why are people consuming

In the process of cooking of meat and fish, subtle foul air is released. As a result negative energies are attracted to it. Due to this the people present in that area have to repeatedly face distress of negative energies.

While elucidating the meaning of a quote from the Mahabharat, ‘Ahimsa Parmodharma’, Raman Maharishi says, ‘Non-violence is the supreme Dharma.’

9. Why are the various rules devised by

authors of the Scriptures for destroying the inclination towards non-vegetarian diet?

Despite being instructed about the adverse effects of consuming non-vegetarian diet and advised on refraining from it, some people continue to be non-vegetarian. To destroy the inclination of such people towards non-vegetarianism, authors of the Scriptures have devised certain rules about it. For example, prohibiting the consumption of or even looking at non-vegetarian diet on certain days and during specific time periods.

This means that we get engrossed in whatever we see. Its impressions are formed on the mind. On the other hand, when scenes, thoughts or actions are removed from our vision, mind or memory, their intensity diminishes. Abiding by the rules of not consuming non-vegetarian diet too has similar results.

10. Reasons for not abiding by Scriptural rules and its effect

The Scriptures devised rules about diet; but the influence of Western Culture kept increasing. Also systems for providing education on Dharma became non-existent. As a result, people gave up following the rules of Dharma. Their attraction for non-vegetarian diet and alcohol continued to increase. Depending on the form and intensity of the unfulfilled desires of the negative energies. Taking advantage of the increased Tamo-guna in the person due to consumption of non-vegetarian diet, these negative energies cause distress. They fulfill their unfulfilled desires of consuming non-vegetarian diet and alcohol, using such people as a medium.

11. Why do Saints advocate giving up non-vegetarian food?

Saints are the Sagun form of God. They are aware of what is necessary for the person who visits them. That is why, they advise or ask only about those aspects.

caused due to consumption of non-vegetarian diet

A non-vegetarian diet makes one susceptible to the effects of negative energies and also results in sin. For some reason if consuming non-vegetarian food is unavoidable. In this regard, a verse (shloka) says:

Meaning: By consuming panchagavya, that is, a mixture of cow-urine, cow-dung, cow-milk, curd and ghee made from cow’s milk over five nights, the sin caused by consumption of non-vegetarian food is obliterated.

If it is not possible to perform this remedy, then maximum chanting of God’s Name can help in purification. This makes us realise that the Hindu Scriptures have given due thought to save man from any sins committed knowingly or unknowingly, thus leading him on the path of Spirituality.