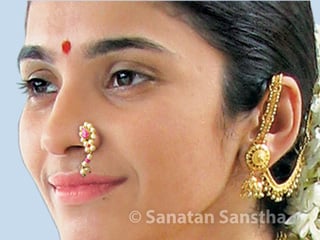 Ancient Sages and Ascetics were conversant with Acupressure Therapy. To help man lead an evolved life, they devised superior and everlasting Achardharma (Code of conduct) pertaining to day-to-day life in such a way that through them Acupressure Therapy took place easily, meaning, in abiding by Dharma (Righteousness), an individual would get the appropriate benefits of Acupressure Therapy unknowingly and easily. 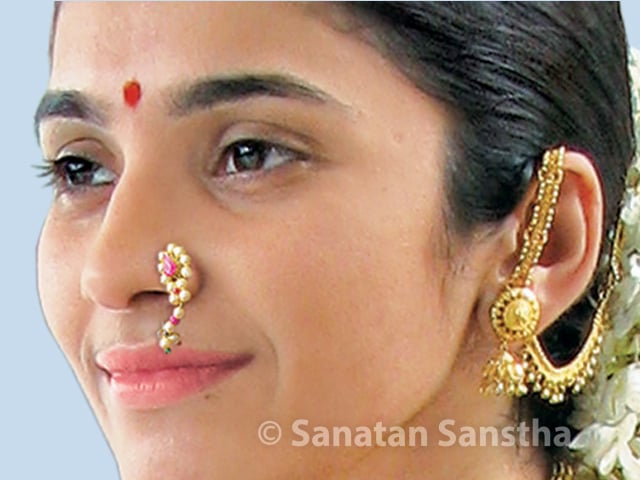 1. Acupressure Therapy is a part of Karmayoga (Path of action)

Achardharma of Hindus is ‘Karmabandhanyoga’ (Bondage of karma). This is known as Karmayoga too. Acupressure Therapy is used in this Yoga.

Some examples of actions in day-to-day life as ascertained by Sages and Ascetics, and pictures based on subtle-knowledge drawn by Ms. Priyanka Lotlikar are given ahead. These examples will also help us realise the depth of Hindu Dharma.

Dharma and effects as per the science underlying Acupressure

Note 1 – Effects of holding a japamala :

A Japamala in the hand serves as a good reminder (to chant) to the individual, and with the help of the thumb and the ring finger, continuous communion with God is maintained at the level of Apatattva (Absolute Water Principle) and Akashtattva (Absolute Ether Principle). [Another school of thought says it is Pruthvitattva (Absolute Earth Principle) and Tejtattva (Absolute Fire Principle)]; hence, it is known as ‘smarani (One that reminds)’. When moving a bead forward with the help of the middle finger and with the touch of Tej (The middle finger is associated with the Tejtattva [Another school of thought says it is the Akashtattva]), the obstacles created by negative energies in the process of chanting can be eliminated. Also, the mudra created when counting the beads is the prana-mudra. It keeps the five pranas (Vital energies) in the body continuously active, meaning, it keeps the sensitivity required for imbibing Chaitanya (Divine consciousness) active. During a mudra, Acupressure is affected.

3. Examples of how does Acupressure work in day-to-day life

A. Wearing a ring

The Chaitanya in a ring exerts pressure on the soft part of the fingers, and results in Acupressure treatment. It eliminates the obstacle of distressing energy and the Chaitanya reaches every finger.

B. When a man places the janeu (Sacred thread) over the right ear while urinating or defecating

The spiritual healing affected by a janeu is indirect and takes place at the level of touch. The energy (in the form of Tejtattva) from the janeu, through contact with the ear, spreads into the body through the void of the ear. It leads to activation of the Suryanadi and creation of a protective sheath around the body. Consequently, the individual is protected from the contact with Raja-Tama-predominant waves whilst urinating or defecating.

4. Subtle-knowledge of some conducts in day-to-day life

A. Subtle-benefits of piercing the ears and nose

B. Subtle-benefits of walking barefoot

5. How does Acupressure work unknowingly and

continuously by wearing ornaments and through every action

The physical body of humans is perishable and has limitations. Naturally, there are limitations to keeping the body healthy. From this perspective, it can be said that Acupressure Therapy has its limitations. However, since the subtle-body of man is eternal, by using this therapy man should progress on the path to obtaining Anand (Bliss) and try to merge with it. This is the true purpose of human life. Everyone should make efforts to achieve this and obtain the inspiration to progress spiritually in life. This is the prayer at the Holy feet of the Vishwachetana (Universal life energy).