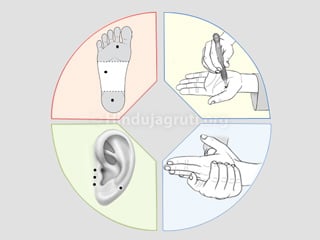 Acupressure is an ancient Therapy discovered by the knowledgeable Sages and Ascetics and is of great importance because it is based on the science of Spirituality. In this method, the Acupressure points corresponding to a specific organ are pressed and the associated organ is stimulated. Through activation of a point, the obstacles in the flow of energy are overcome. 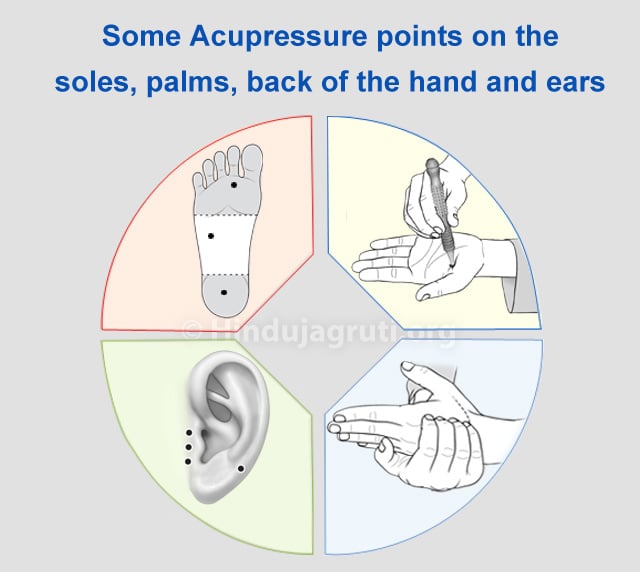 When an object is touched gently by Chaitanya (Divine consciousness), its basic nature, meaning, its main functional quality manifests. Applying pressure is a physical remedy. It uses the Pruthvitattva (Absolute Earth Principle) to activate the energy which has congregated in a specific area. In other words, Acupressure brings about manifestation of the basic nature of an object.

B. Reason for special importance given to the soles, palms, back of the hand and ears in Acupressure Therapy

3. Ear (Akashtattva [Absolute Ether Principle], spiritual illnesses) : Ears are associated with Akashtattva and Nadtattva (Sound Principle). Since some illnesses, to the extent of 40%, are beyond diagnosis, these are labelled as spiritual illnesses since these originate from spiritual distress. The Acupressure points which impart sound vibrations and which are situated on the ears are given importance in such cases. Hence, in Acupressure Therapy, to cure spiritual illnesses effectively and to sustain the effect of this treatment for a longer period, the sound generating cavity of the ears is selected. Pressure at these three points can generally give pleasant experiences to the individual at all levels of suffering, and the individual can be freed of illness in a short period.

1. Not benefiting from this method : Many hereditary and psychological diseases such as schizophrenia, diseases that require surgery (such as cancer, fractures) or certain illnesses (such as intestinal obstruction etc.) cannot be treated through Acupressure Therapy.