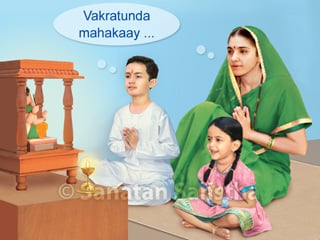 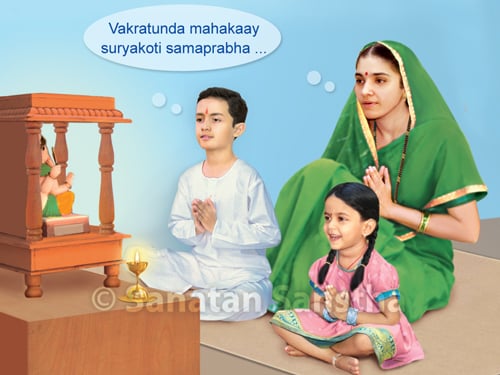 This article gives details of various mantras associated with Shri Ganapati and spiritual benefit obtained through recitation of these mantras.

Here, ‘Shri’ means ‘Shrim’ which is the bij-mantra (Basic monosyllabic mantra). ‘Ganeshaya’ is the concept of the bij (Root) while ‘Namaha’ is the pallav (Salutation).

Meaning : ‘Om’ is the ‘pranav’ (The sacred syllable), ‘Gan’ the bij-mantra, ‘Ganapataye’ the figure and ‘Namaha’ means ‘I offer obeisance’

Gan (गँ)’ is the bij-mantra of Ganapati. The energy group from which Shri Ganapati (meaning the energy flows in the five Cosmic Principles) originated is incorporated in the bij-mantra ‘Gan’. The pronunciation of ‘Gan’ is the product of the blending of the five nasal consonants nha (ङ), yan (ञ), na (ण), na (न) and ma (म).

In this connection, the Atharvashirsha mentions –

A. Effect of repetition of ‘Gan’

Effect of repetition of ‘Gan’ on the root of mandar (Coral) tree : Upon chanting of ‘Gan’ in front of the white mandar tree, a root of that tree springs up. It is shaped like Shri Ganesh’s form. The reason for this is, that chanting of ‘Gan’ creates its waves in the atmosphere. This has an effect on the roots of the tree and according to the law that ‘Word, touch, form, taste, fragrance and their energies coexist’, with the generation of the energy of ‘Gan’, a root shaped like Shri Ganesh springs up. If a white mandar tree that is more than 7 or 8 years old is uprooted, we will find that the shape of its root resembles Shri Ganapati.

On Angarakyog or on a Sunday when the Pushya lunar asterism is present, perform Shoḍashopachar-puja of a tree (which is more than seven or eight years old) and recite the Shri Ganapati Atharvashirsh. Generally, beginning from the Chaturthi of one fortnight to the next, approximately one thousand recitations should be completed. Then modak, parched corn and durva blades, each a hundred in number, should be offered as oblation in a sacrificial fire. Finally, without speaking to anyone or touching anyone, the tree should be uprooted. Its form will resemble Shri Ganapati. This sanctified Idol should then be installed in the house. The Idol should be worshipped daily with frankincense, a lit lamp and offered Naivedya along with the recitation of the Atharvashirsha. Often such an Idol is kept covered to prevent the loss of its energy.

Chanting of the mantra ‘Gan’ over a flint stone from salt water for at least a year results in the stone acquiring the form of Shri Ganapati. Moraya Gosavi, a great devotee of Shri Ganesh created several such Ganapati Idols.

The Indian science of writing based on phonetics : In the Holy hymn ‘Shri Ganapati Atharvashirsha’, the bij-mantra ‘Gan’ is used in reference to correct writing.

‘Tharva’ means hot, ‘atharva’ means Shanti (Peace) and ‘shirsha’ means the head. Thus Atharvashirsha is that by recitation of which one acquires peace. Sage Mudgal, the disciple of Sage Bhagavan Jaimini from the Samaveda branch, wrote the ‘Sammudgal Ganeshsukta’. Thereafter, Sage Mudgal’s disciple, Sage Ganak, wrote the Ganapati Atharvashirsha. In most mantras, contemplation of the Deity, that is, description of its Idol precedes its praise. However, it is the reverse in the Atharvashirsha.

The three main parts of the Atharvashirsh are –

A. Recitation of the Atharvashirsha

When reciting this Holy hymn, pay attention to the following suggestions.

B. Benefits of reciting the Atharvashirsha

Meaning : We are familiar with Ganapati who has only one tusk. We contemplate on Vakratunḍa (Ganapati). May that Ganapati (danti) inspire our intellect benevolently.