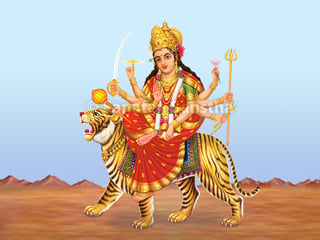 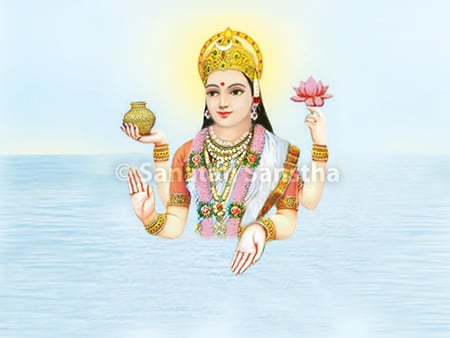 Innumerable Shaktis of God are in a state of oneness with Him. Amongst them, the following three forms of Shakti are given predominance.

2. Forms of Shakti according to mission

2A. Shaktis associated with Creation

Names of Shakti associated with creation

Although, theoretically, Saraswati is associated with Deity Brahma, the Creator of the universe, yet physically, the following Deities are more closely associated with Creation.

Devis such as Bhudevi are headless. They possess only the breasts and vulva. At times, a lotus or a chakra (Wheel) substitutes the head. For the vulva to appear prominent, the legs are bent and pressed against the abdomen. The breasts signify Sustenance and the vulva represents Creation. Sometimes, a lotus, which is a symbol of procreation, is drawn at the site of the vulva. (A bull is a symbol of masculinity or paternity.)

The objective of worship of these Devis is to beget children.

2B. Shakti associated with Sustenance

Their mission is nurturing and sustaining the universe as well as its manifestation, that is, bestowal of good fortune, prosperity, wealth, longevity and health, progeny, abundant food grain, servants, etc.

2D. Forms of Shakti associated with Creation, Sustenance and Dissolution

Shakti associated with Creation, Sustenance and Dissolution is Navadurga. There are nine different dimensions in the nature and a separate form of Shri Durgadevi rules each dimension. There are nine such Durgas and hence they are called ‘Navadurga’.

3. Shakti in the form of rivers

The river Ganga originates in the Himalayas at Gangotri and culminates in Bay of Bengal through its tributaries. It stretches along 2,510 kilometres.

This river originates in the mountain named Mekal from the Vindhya mountain range and meets the Arabian Sea at Bhrugukachh (Bharuch) in Gujarat, in Bharat. It stretches 1288 kilometres.

Just as one circumambulates the Deities, Narmada is the only river in the world that is circumambulated by people as their spiritual practice, starting from its origin to its confluence with the ocean and then return to its origin without crossing the river. Even today, many seekers have the spiritual experience that in the course of their circumambulation (or pilgrimage) through forests and remote unpopulated regions, the river Deity provides them with food and never lets them go hungry.

Some other Holy rivers are Yamuna, Godavari, Saraswati, Sindhu and Kaveri. River Ganga is associated with knowledge, while river Yamuna with devotion.