Dhanushkodi is Hindus’ holy place of pilgrimage on the South-East end of India. This place is the origin of sacred Rama-setu; but in the past 50 years, this holy pilgrimage place has become a ruined town. On 22nd December 1964, this city was destroyed by a cyclone. The Government did not bother to restore this place; moreover, it declared this city as ‘Ghost Town’. A study-group of leaders of pro-Hindu organizations from States like Bengal, Assam, Maharashtra, Karnataka and Tamil Nadu visited Dhanushkodi. The grave facts unearthed during the visit are given through this article.

There is Indian Ocean on the South of Dhanushkodi which has water that looks blue whereas the Bay of Bengal on its North looks muddy with blackish water. The distance between these two Seas is not even 1 km and their water is salty. Digging even 3 feet anywhere in Dhanushkodi, one gets sweet water. Isn’t it a miracle of nature ?

On the East coast of Tamil Nadu is the holy place of Rameshwaram and Dhanushkodi is 11 kms on its South which is 18 miles (apprx. 30 kms) from Sri Lanka. It is situated on the confluence of Bay of Bengal and Indian Ocean. It is just about 150 feet wide and sandy.

Religious significance of Rameshwaram and Dhanushkodi

Rameshwaram has religious importance in Southern India just as Kashi has in North India. Rameshwaram is one of the 4 holy places (chaar-dhaam) of Hindus. As per the Puranas, pilgrimage of Shri Vishweshwar at Kashi is complete only after ‘darshan’ of Sri Rameshwar at Rameshwaram. The pilgrimage of Kashi is considered as complete only after taking bath at Dhanushkodi which is on the confluence of Bay of Bengal and Indian Ocean and after doing ‘abhishek’ with Gangajal (water of River Ganga) over Rameshwara.

History of Dhanushkodi and antiquity of Rama-setu !

One part of Shri Ram setu is known as Dhanushkodi (Dhanushkodi means an end of bow) because about 17, 50, 000 years ago, Sriram marked this place with end of His Kodanda bow for building a bridge (setu) to enter Ravana’s Lanka. Even today, we get to see a chain of big stones in one line in the form of ruins of Rama-setu.

Rama-setu is an amazing form of architecture created by Nala and Neel. The length and width of Rama-setu is in the proportion of 10:1. Its detailed description is found in Valmiki Ramayana.

After taking measurement also, it is found that its width is 3.5 kms whereas its length is 35 kms. Several generations of Hindus know the story of a tiny squirrel that rendered its service in building the Rama-setu, as well as the story of the floating stones.

Before the battle between Shriram and Ravana, Ravana’s brother Bibheeshana had surrendered to Shriram in Dhanushkodi town. After the war of Lanka eneded, Prabhu Ramchandra crowned Bibheeshana as the King of Lanka. Bibheeshana, the King of Lanka said to Prabhu Ramchandra that brave and valiant kings from India would always use Rama-setu to attack Sri Lanka and Sri Lanka would lose her independence; requesting Shriram to destroy the setu. Prabhu Ramchandra bestowed His grace on His devotee, shot an arrow and the bridge was submerged 2-3 feet below water level. Even today, if anyone stands on this bridge, he finds water upto his waist level.

Earlier anti-Hindu Congress Government at Centre had hatched a conspiracy to destroy this Rama-setu by setting up a project called ‘Setusamudram Shipping Canal’ considering only its commercial benefits. The project was an attack on Hindus’ faith. After about 24% Rama-setu was destroyed, the Supreme Court ordered stay on this project but by then, big stones of this setu were crushed. The remnants of the stones can be seen even today floating on the water of Indian Ocean and Bay of Bengal. It is observed that few people are even selling these stones. Thus the Congressmen, who have destroyed a structure that has historical and religious connotations, are not only guilty towards whole mankind but also towards history; their crime is unpardonable !

Dhanushkodi was a big town before 1964 !

Dhanushkodi was a big town during British regime and Rameshwaram was a small village where boats were available for going to Sri Lanka. In those days, passport was not required to visit Sri Lanka. It took only Rs. 18/- to go to Thalaimannar (Sri Lanka) from Dhanushkodi on voyage. It was also used for trading. In 1897, Swami Vivekananda came to Dhanushkodi via Sri Lanka after attending a conference on religion in USA in 1893. In 1964, Dhanushkodi was a famous tourist and pilgrimage place. There were hotels, shops and lodging houses for devotees. There was a ship-building yard, railway station, a small hospital run by railway, post office and government offices like fisheries etc. Before the cyclone of 1964, there was a railway service between Chennai and Dhanushkodi known as boat-mail starting from Egmore, Madras. Later, it was also used for travelers going to Sri Lanka in ferry.

In 1964, Dhanushkodi was hit by a cyclone; its centre was 5 degrees East of South Andaman Sea. The cyclone hit on 17th December 1964. On 19th December, it became even more severe and on 22ndDecember, it hit Dhanushkodi at speed of 270 km per hour after crossing Sri Lanka. During the cyclone, 20-feet high waves hit the town from the side of holy confluence on East of the town; destroying the entire Dhanushkodi town.

There is a memorial built for people who lost life during this cyclone near bus-stand of Dhanushkodi. It is written on the memorial that – ‘On the night of 22nd December 1964, Dhanushkodi town was destroyed by a cyclone that had very high speed winds!’

The cyclone moved fast towards Rameshwaram with 8 feet high waves. Official toll puts the number of dead at 1800, although the local people give a highter number of 5000. All houses and other structures got destroyed in the cyclone; only their ruins remained. The witnesses of the cyclone tell that water flowing at very high speed had stopped near the entrance of main Rameshwaram Temple. Hundreds of people had taken shelter in Rameshwaram temple.

Only one person was saved !

In the cyclone of 1964, everyone from Dhanushkodi town was killed except one person whose name was Kaliyaman ! This person swam in cyclone to save himself; therefore, the Government felicitated him by naming the neighboring town of Dhanushkodi after him. This place is known as ‘Nichal Kaliyaman’; Nichal means swimmer.

After this calamity, the then Madras Government declared, over radio, Dhanushkodi as a Ghost Town and prohibited citizens from staying there. A place, which is totally deserted, is known as Ghost Town. Now, only fishermen and traders go there during day time for their business; but they have to return before 7.00 p.m.

Town of sand and ruined vaastu! 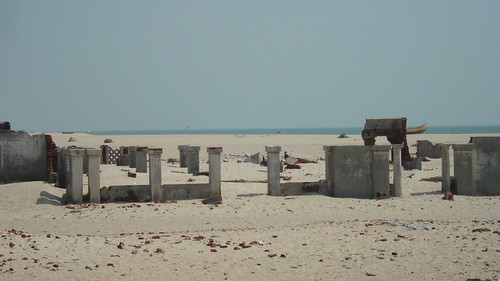 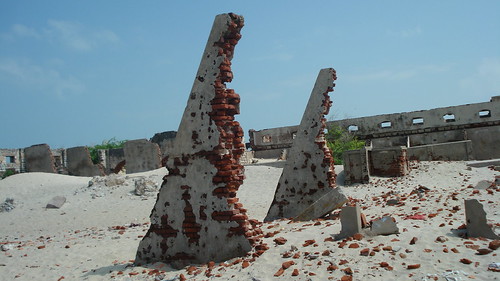 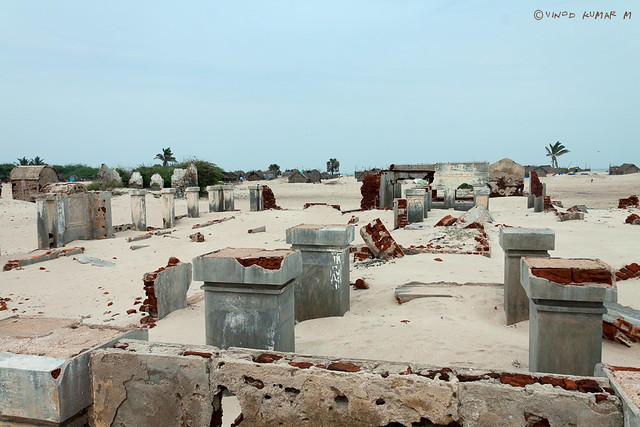 Now, Dhanushkodi is full of sand (with sea-water and weeds in between). Aerial or satellite images show only sand. There are ruins of many structures everywhere. One can clearly see ruins of ship-building yard, railway station, post office, hospital, police and railway employee colonies, schools, temples, churches etc.

Devotees are instructed to visit Dhanushkodi in the morning and return in the evening; because there is a 15 km road which is totally deserted and scary. Presently, around 500 devotees visit this place daily and on the days of festivals and full-moon days, the number of visitors is higher. Devotees have to use private transport for going to Dhanushkodi and the drivers of such private vehicles charge them anything between Rs. 50 – Rs. 100/-. In the year 2003, Southern Railway Ministry had sent a report to the Government for approval of laying railway line from Rameshwaram to Dhanushkodi as demanded by devotees.

The road laying work from Muhuntharayar Chathiram to Dhanushkodi has started and would be completed in six months, Minister for Sports and Youth Welfare S. Sundararaj said on 3rd May 2016. The project would be extended up to Arichalmunai, the tip of the land strip, covering 4.5 km. Ref : The Hindu

No contacts with Sri Lanka !

Owing to dispute over sea-boundaries between India and Sri Lanka, the sea-voyage from Dhanushkodi to Thalaimannar has been stopped. Hindus from Dhanushkodi, therefore, have lost contact with Hindus from Sri Lanka. Earlier, milk used to be brought from Sri Lanka to India every day at 6.00 p.m. which was used for ‘abhisheka’ over Shiva-linga at Rameshwara temple, the next morning. This tradition was however, discontinued due to border dispute between India and Sri Lanka. It used to take 2 hours to cover the distance of 35 kms. between Thalaimannar and Dhanushkodi via boat. Now, one has to travel for 10 hours from Thalaimannar to Colombo which is 500 kms distance and Colombo to Madurai flight takes 1 hour. Madurai to Rameshwaram distance is 200 kms for which bus takes 4-1/2 hours.

Only Hindu Rashtra will bring back the lost glory of the Pilgrimages !

Considering the grave facts of Dhanushkodi, one realizes the total indifference of rulers from all parties towards Indian places of pilgrimage. Will India’s ‘Vikas-Purush’ announcing transformation of Kashi into a smart-city, do justice to Dhanushkodi town which is a must visit after Kashi pilgrimage ? Hindus’ insensitivity is also one of the reasons for such deterioration and we Hindus should realize that if we remain indifferent, many prospering places of pilgrimage will become like Dhanushkodi in future. Hindus should insist that the Government should develop the places of pilgrimage, create facilities like lodging, proper roads etc. at such places although in a secular regime, expecting the Government to do something that is in the interest of Hindus, would be far fetched! Establishment of Hindu Rashtra is the only solution for true development of places of pilgrimage.