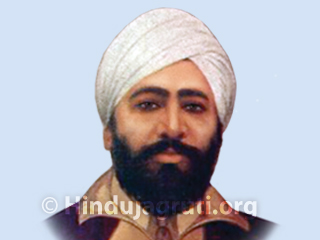 July 31 is the Martyrdom Day of Sardar Udham Singh who is well-known as the Tiger of Punjab. This article pays obeisance to his memory.

The Sworn Enemy of British Empire

5th June 1940. The Old Bailey Court in London, Judge Atkinson is read out an appeal by a sturdy Hindustani accused. The man is in his 40s and holds his head high. It was his last speech before the Judge could declare the punishment. He said,” I have seen many children dying due to malnutrition in India under British rule. I have witnessed with my own eyes the massacre committed by General Dyer under the command of O’Dwyer. These events made me a sworn enemy of the British Empire. Had I not assassinated O’Dwyer in revenge, it would have been a blot on Hindustan’s reputation. I am not bothered about the 10, 15, 20 years imprisonment or death sentence that you may give. What use is it to remain alive till old age? The real credit is to die young. I want to be a martyr of my nation!”

He spoke for 20 minutes. The judge could not tolerate this narration about the British Government’s complete exploitation of Hindustan. By the time the accused had completed reading his appeal, the judge was mighty enraged. He even forgot to wear the mandatory black hat while announcing the death sentence. He banned the accused’s speech from being recorded or reproduced. An orderly in the court was alert to the occasion and placed the black hat on the judge’s head, just before he announced the death sentence. This accused was Udham Singh. Tiger of Punjab, Sardar Udham Singh was born in the Princely state of Patiala. He was born in Sunam village on the 28th December, 1899. In 1919 he was one of the witnesses of the Jallianwala massacre. He was a volunteer at this meeting. He was serving people water. Even he was hit by a bullet and collapsed to the ground. But when he heard the pitiable cries of his countrymen, he got up and continued to serve them water. 373 innocent people were killed and more than 500 injured in this massacre. The orders for the same had been issued by the Lieutenant Governor of Punjab, Michael O’Dwyer. Since then Udham Singh’s mind was yearning for revenge.

The Blot on Hindustan wiped after 21 years

Sardar Udham Singh was associated with Bhagat Singh for some time. During this period he was caught with weapons and ammunition and sentenced to a 5 year jail term. After his release from jail, he went to England, in 1933. He was firmly determined to kill O’Dwyer, who had returned to England. He got -acquainted with O’Dwyer and became more and more familiar with him. In 1940, O’Dwyer even invited him for Tea at his Devonshire residence. Udhamsingh accepted the invitation. He could have killed O’Dwyer then and there. Yet he avoided it, so that he could kill O’Dwyer in full public view.

13th March 1940. A meeting was to be held in the Caxton Hall, where earlier Madanlal Dhingra had assassinated Curzon Wyllie. Presiding over the meeting was the Minister for Bharat, Lord Zetland. The eminent speakers were Percy Sykes, Michael O’Dwyer etc. After everyone had spoken Udham Singh came forward. He fired from just three yard distance at O’Dwyer, who was seating on the left in the first row. O’Dwyer died in two shots. The next two injured Lord Zetland and another two wounded Lord Lamington and Sir Luis Dane.

Married to the Gallows Udham Singh was caught. From the prison, he wrote a letter to his friend Shiv Singh Johal, “I am never afraid of death. I am going to marry the gallows soon. It’s been 10 years since my best friend (Bhagat Singh) left me. I shall meet him after my death. He is waiting for me.” In the meantime he was tortured in the prison. As a protest he went on a hunger strike that lasted 42 days. As expected he was awarded the death sentence. When he heard it, he repeated thrice Bhagat Singh’s popular slogan, “Inquilab Zindabad.” He was so disgusted with the biased British legal system that he spat at the court. On the black day of 31st July, 1940 he was hanged in the Pentonville prison. Personal revenge may be taken in a year or two but the revenge of a nation can be derived even after many years have passed. Intense patriots wait for the right opportunity to arrive. Even after 21 years, Hindustani Patriots are ready to sacrifice their life to seek the revenge for any insult or injury to their nation. This is what Udhamsingh showed to the world.