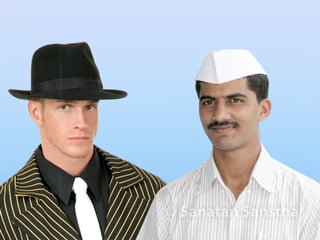 In this article, let us understand reasons for covering the head during auspicious occasions, disadvantages of wearing hat, cap or topī as compared to a turban and features and benefits of sāttvik cap designed by Sanatan.

2. Why should men not attend auspicious occasions without covering their head ? 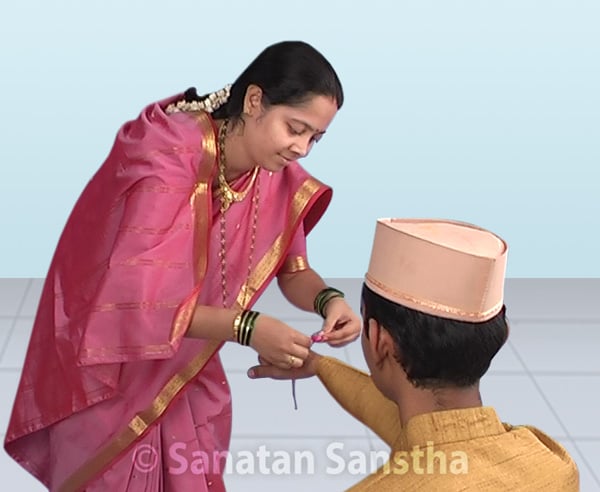 2A. Manhood is a symbol of self-activated power of functioning.

2B. By covering the head with a cloth, the Raja -predominant action waves at the venue of the auspicious function are drawn towards the cloth; they awaken the functional power in man and motivate him to carry out corresponding activity at the level of Raja component. Since the act of wearing clothes is associated with the saguṇ (Materialised) state, it congregates the swiftly moving waves at the respective places within itself, at the level of action. Upon contact with these waves, man’s Raja-predominant nature is awakened and he prepares to act. Hence, it is said that men should not attend auspicious ceremonies without covering their head.

The swiftly emitted Raja-Tama -predominant waves by the hair are arrested at the functional level due to the cover provided by a topī. Hence, it becomes possible for the individual to obtain the benefit of Raja-predominant action-oriented waves that are spread in the environment during an auspicious ceremony at the saguṇ level. Since a cloth is useful in the emission of action waves, in a way it also helps protect the individual at the level of the Raja component.

3. Why should men either wear a Topī or place the palm of their right hand over their head during aukshaṇ (Ritual of waving a lit lamp in front of a Saint or an individual) ?

Due to the kumkum tilak (Vertical mark of vermilion) and sāttvik ingredients used during aukshaṇ (Ritual of waving a lit lamp in front of a Saint or an individual), mārak (Destroyer) Shaktī-tattva (Energy principle) can be awakened to some extent in an individual who is proceeding for a battle or a campaign, and a brother who promises to protect his sister. Hence, they should wear a Topī or place their right hand over their Brahmarandhra (Opening in the spiritual energy system, located on the crown, in the subtle-body) for some time. As a result, the awakened mārak Shaktī-tattva is retained within the body without getting emitted and they get more benefit of the mārak-shaktī.

4. Disadvantages of wearing a hat, cap or a Topī woven with white thread

Hats were worn by British officers during the British rule. A cap as is prevalent today has an elongated frontal portion and rounded edges. A Topī is knitted from white threads and has lattice.

4A. Creation of a covering of Raja-Tama waves around the individual’s head and Sahasrār-chakra

4B. Creation of a thick distressing covering of Raja-Tama waves around individual’s mind and intellect

4C. Creation of a covering of distressing energy from the atmosphere and Pātāl (Hell region) around the individual’s head, mind and intellect

5. Flat white Topī (also known as a Gandhi-Topī, since Gandhiji used to wear one) 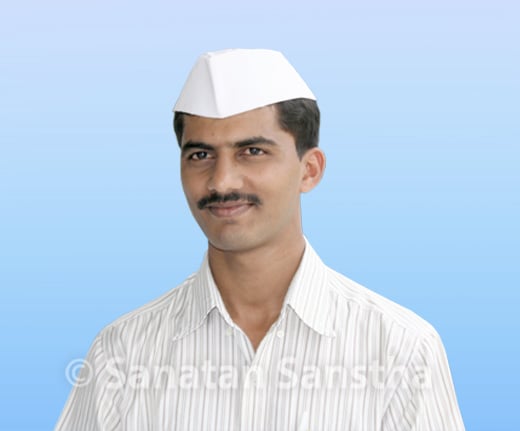 This particular Topī prevalent in the pre-Independence Era is now mostly used in some limited regions only. However, most Hindu families are very particular about using it during religious rituals, marriage ceremonies, etc.

5A 1. Due to the inappropriate shape, a Topī falls prey to the attacks of negative energies

In the earlier times, the use of turban was prevalent among people. Since a long cloth is needed for a turban, Mohandas Karamchand Gandhi made the flat white cloth Topī popular for the convenience of the poor Bharatiyas, which later came to be known as Gandhi-Topī.Nirguṇ (Non-materialised) Divine Principle is attracted to the Gandhi-Topī due to its white colour. However, due to its inappropriate shape (flat and pointed at the fore and rear end) distressing vibrations are emitted by it. Due to these distressing vibrations, the Topī falls prey to the attacks of negative energies. Hence, a Topī is good as well as distressing. Though the objective in making the Gandhi-Topī popular was good, its shape restricts the benefits that can be obtained.

5A 2. It is psychologically important to wear a Topī during a religious ceremony

5B. For an ordinary individual who wears Gandhi-Topī, it amounts to ‘something is better than nothing’

After knowing about its limitations, one may not feel like wearing a Gandhi-Topī at all. Though the benefits of the Gandhi-Topī are limited, it is still preferable that an ordinary individual wears it for the reasons mentioned ahead.

5B 1. An ordinary individual in the present Kaliyug does not have much of bhāv (Spiritual emotion) towards God. Hence, he performs pūjā, religious rituals mechanically and therefore, does not benefit much from such acts because ‘Wherever there is bhāv there is God’. Wearing a Topī during religious ceremonies helps in generating bhāv at least to some extent towards the karma, due to which the individual is bestowed with God’s blessings, thereby helping enhance the result of the karma.

5B 2. In the earlier times, most Brāhmaṇs (One who belongs to the first of the four varṇas (Classes), studies scriptures and imparts knowledge to the society) used to keep a tuft of hair on their head, and they were all sāttvik. The tuft would act as an antenna, and hence, it would be easy for these individuals to imbibe the waves of Deities from the environment through its medium. Therefore, there was no need to use any external medium such as a Topī. In the present Kaliyug, almost everyone’s sāttviktā has reduced and hence, even those who keep a tuft should preferably wear a Topī. 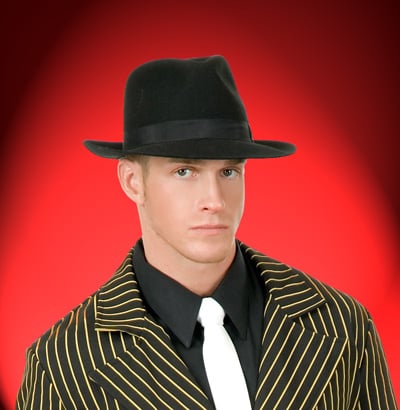 People in the earlier times were very sāttvik; they recited mantrās regularly and were followers of Vēdic culture. Therefore, acts such as keeping a tuft on the head and wearing janēu (Sacred thread) were considered to be a Vedic code of conduct then. With the passage of time, the Bharatiyas came under the strong influence of western culture and Bharatiya intellectuals started turning towards a British lifestyle. During this period, Gandhi-ṭopī became prevalent. Undoubtedly a Gandhi-ṭopī is better than a western hat. Since there was a decline in people following āchārs (Conduct conforming to Shruti and Smruti, general conduct) of the Hindu culture, and individuals turned increasingly towards western culture, their attitude itself became Westernised; this caused a decline even in the use of Gandhi-ṭopī, thus giving rise to a bizarre, evil and corrupt culture. In Kaliyug, even the attire of the olden times has become extinct. Besides, the moral behaviour itself has declined so much that a new culture of ‘undressing’ has come to the fore and immorality has reached its height. Bharat now stands at the doorstep of this evil culture, which means that it is rushing towards the path of self-destruction at the hands of demons. From this, it can be realised how by gaining control over the minds of people through non-sāttvik clothes, the māntriks gradually turned Bharatiyas towards an evil culture. Thus, with their advance planning, the māntriks have brought Hindu culture on the verge of extinction. The visible changes in the colours and types of attire of Bharatiyas are indicators of this development.

Bharatiyas preferring black colour is an indication of the influence of the western culture on Bharat. Attraction towards black colour has developed through the demoniacal Māyā (Great Illusion) of westerners. Hence, in the name of fashion, people of those times began using the black hat instead of the white Gandhi-ṭopī. It became an identity of an officer, a way of identifying with western culture. Accordingly, though the ṭopī was deemed a part of Bharatiya attire in place of the hat, the demoniacal energies had sown the seeds of black colour in the ṭopī, and through it, they tried to impose thoughts pertaining to western culture on the Bharatiyas. The contact of this black colour created a covering over the mind and intellect of many intellectuals, and under the impression of being ‘progressive’, they adopted English language. Under the influence of such thoughts, they began to contribute towards English literature thinking it to be the need of the society. In this way, due to the black hat, the deceptive māntriks brought the sāttvik brain of Hindus under their influence, and popularised English culture in Bharat. This resulted in the rejection of colours such as saffron, blue and yellow that emitted sāttviktā. In Kaliyug, the Bhartiyas did not even realise how through the medium of colours and bizzare designs and patterns of garments, the māntriks gradually planted perverted thoughts in their minds.