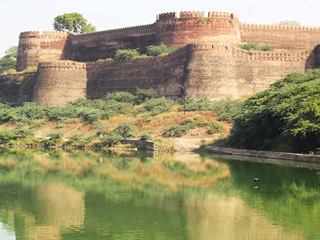 Balapur, a taluka town, is 26kms Akola, the district headquarters. Situated at the junction of the rivers Man and Mhais, Balapur is a historical town and has a massively built fort, probably the strongest in Vidarbha and Khandesh regions of Maharashtra. The fort was started in 1721 AD by Azam Shah, the son of Emperor Aurangzeb, and was completed by Ismail Khan, the Nawab of Ellichpur (now Achalpur, Amaravati District) in 1757 AD. The fort is in a reasonably good condition and today houses some government offices.

Situated on a high ground between the rivers, the fort has very lofty walls and bastions built of the best brickwork of its time. The fort has three gateways, one within the other. The outer or the lower fort is a decagon with a bastions at each angle, and above it rises, by the height of its walls, the inner fort which is a pentagon, each angle having a bastion, as in the lower fort. The innermost walls are 3 metres thick and their ramparts are pierced with numerous slits at three different angles for the discharge of missiles. Inside the fort are three wells and one mosque. During the rains the fort gets surrounded by floodwater except at one point. The temple of Bala Devi, from which the town has derived its name, lies just under the fort on the southern side.