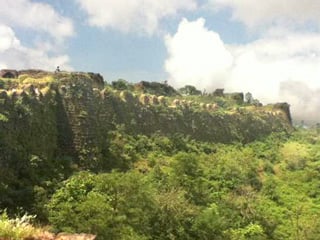 Gawilghur fort  is situated on a 1103 metres high lower Satpuda range, now under the Melghat Tiger Project. It is 2.5kms south-east of Chikhaldara, a popular hill station, and about 30kms north of Achalpur, the old capital of Berar, now a taluka town

Gawilghur fort is situated on a 1103 metres high lower Satpuda range, now under the Melghat Tiger Project. It is 2.5kms south-east of Chikhaldara, a popular hill station, and about 30kms north of Achalpur, the old capital of Berar, now a taluka town. Gavilgarh took its name from the pastoral Gavalis who, centuries ago, had a mud fort on this hill. The new fort was built by Ahmad Shah Wali, the ninth king of Baharmani dynasty in 1425 AD, the fort was repaired and extended by Fateh-ullah Imad-ul-Mulk, the founder of Imadshahi in Berar.

Gawilghur fort has two levels, the outer fort being slightly lower than the inner one. This outer fort has a third wall which covers the approach to it from the north. The fort has two main gateways, the Delhi Darwaza, between the inner and outer fort, and the Fateh Darwaza, the south-western gate, built by Fateh-ullah Imad-ul-Mulk. The most conspicuous of the remains in the fort is the great mosque which stands upon the highest point towards the south side of the inner fort. Built in the Pathan style of architecture, the mosque has seven arches in its façade. Of the two minarets, the one at the north-eastern angle of the building still exists. Its square canopy, with very exquisite stone lattice-work, rises little above the domes of the mosque. There were not less than eight tanks in the fort, two of them still in good condition. There still remain in the fort several canons, the one at the southern end being the largest.

Gawilghur has a long history. The saying was; “One who controls Gawilghur, controls Berar.” After the split of the Bahamani Kingdom, it passed through many hands. It was with the Imadshahi in 1488 AD, the Nizamshahi in 1574 AD, the Mughals in 1599 AD and the Marathas in 1754 AD, before it fell to the British in 1803 AD. Gawilghur fort was dismantled in 1858 AD lest it should be seized by Tatya Tope, who in that year attempted to break from the Satpuda hills into the Deccan in order to stir up the country for the independence movement.