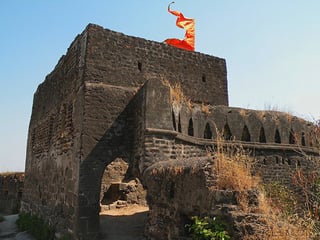 Tryambak or Brahmagath hill fort, overlooking the holy temple of Tryambakeshwar, is 32kms south-west of Nasik town. The fort was built on a high hill with steep scarps to its each face.  Besides, it was fortified by walls and bastions.  There are only two gateways.  The main southern access is through the steep steps (about 300 in numbers) cut out of a near vertical scarp and passing through rock cut gates. The northern access is through only a single gate approached by a narrow passage with steps cut from the rock.  The fort is now in ruins. From the top of Tryambak, one can have grand view of the Harihar, Anjaneri and a few other hill forts.

Being in the category of Devagiri, Tryambak fort seems to be of Rashtrakuta-Yadava origin. After the Yadavas (1271AD) it was occupied by the Nizamshahi sultans, the Mughals and the Marathas. Tryambak and its cluster of forts provided cover to upper Konkan and so was of strategic importance. In 1818 AD, when Tryambak was taken over by the British with a tough fight, the surrounding forts surrendered without any resistance. The river Godavari originates from the Tryambak hill.

Chakan village and its land fort is 29kms north of Pune. Nearly square, the chakan fort was protected by a strong wall with bastions and corner towers surrounded by a moat. There was also an inner wall. The chakan fort is now in ruins.

The Chakan fort is quite old and was occupied by several ruling powers. An Abyssinian chief is said to have made the first fortification in 1295 AD. In 1595 AD.  It was given in jagirto Shivaji’s grandfather, Maloji Bhosale. An important event occurred here when the fort was captured by Shaista Khan in 1660 AD. Being on the shortest route from Ahmadnagar to Konkan, Chakan was a place of great strategic importance. The fort was captured from the Marathas by the British in 1818 AD.