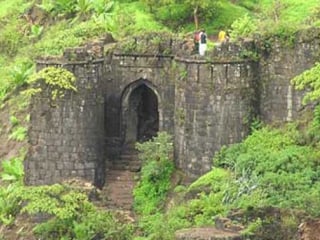 Sinhagad fort, whose earlier name was Kondana or Kondhana, stands 20kms, south-west of Pune.  Perched on an isolated cliff of the Bhuleswar range of the Sahyadri Mountains, its height above sea-level is 1380 metres.  Given natural protection by its very steep slopes, the walls and bastions were constructed at only key places; it has two gates – the Kalyan Darwaza in the south-east and the Pun Darwaza in the north-east

Sinhagad fort has a long history.  It was captured from theKoli tribal chieftain, Nag Naik, by Muhammad bin Tughlaq in 1328 AD.  Three centuries later, Shivaji wrested it away by bribing the commander, by the Treaty of Purandar (1665 AD) had to cede the fort to the Mughals.  Sinhagad fort was the scene of one of the most daring exploits in Maratha history when, in 1670 AD, it was recaptured by Shivjaji’s forces under Tanaji Malusare, who laid down his life in the battle.  On his death, a saddened Shivaji said, “The fort is won, but the lion is gone!” Whereupon the fort got is new name:  Sinha (lion) gadha (fort).  Finally the British seized the fort from the Peshwas in 1818 AD, destroying its almost all ancient monuments.  Only the traditional gates and broken walls remain now.

The upper surface of the fort is undulating and retains few buildings, Ruins of temples, tombs and towers are scattered about.  Near the gorge is a monument (Samadhi) commemorating the bravery of Tanaji.  There is also a tiny tomb of Rajaram, Shivaji’s son, who died here in 1700 AD. Also there are few bungalows, including that of Lokamanya Tilak.

In the Maratha period Sinhagad fort played the crucial role of defending Pune.  The National Defence Academy (Kharakwalsa) trains its army cadet’s right under the shadows of Sinhagad fort.

1.  A superconscious state of meditative union with the Absolute God Principle, 2. A  tomb,

A mark of saffron or sandalwood paste worn on the forehead