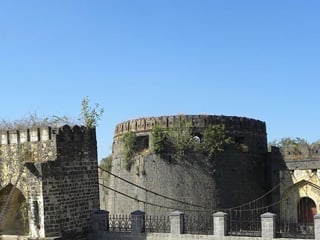 One of the most well planned and strongly built, the Ahmednagar fort (land fort) is situated in the centre of the cantonment in the eastern part of the city of Ahmednagar.  Oval in shape, the fort is about 1.70km in circumference and is strengthened by 24 bastions.  It is surrounded by a moat, now dry, about 30 metres wide and 4 to 6 metres deep, and beyond it there is a wooded glacis.  The massive curtain wall, built of cut stone masonry, rises above 25 metres from the bottom of the ditch.  The two entrances to the fort could be reached only after crossing the moat over the suspension drawn bridges.  Inside the fort there are some old and new buildings, fairly in good condition.  Presently the fort is under Indian military command.

The Ahmednagar fort was built by Husain Nizam Shah in 1559 AD.  The fort was besieged by the vast Mughal army in 1596 AD, but the garrison led by Chandbibi valiantly defied the attack for four months and the Mughals had to beat a retreat.   In the next attack in 1600 AD, the fort was captured by Akbar.  It remained with the Mughals till 1759 Ad, when it was sold to Sadashiv Bhau, the cousin of the third Peshwa.  In 1797 AD, the fort was assigned to Daulatrao Shinde, from whom it was captured by General Welleslay in August, 1803.  Finally under the Treaty of Pune (June, 1817 AD) the fort was handed over to the British by Bajirav Peshwa II.

The Ahmednagar fort was often used as royal prison, both by the Marathas and the British, Nana Phadnis, who was instrumental in imprisoning many Maratha noblemen in this fort was himself locked up in the fort by Daulatrao Shinde.  During the Quit India Movement of 1942, the entire Congress Working Committee was detained here.  Pt. Jawaharlal Nehru wrote his famous work Discovery of India while in confinement at the Ahmednagar fort.