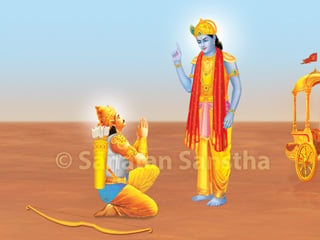 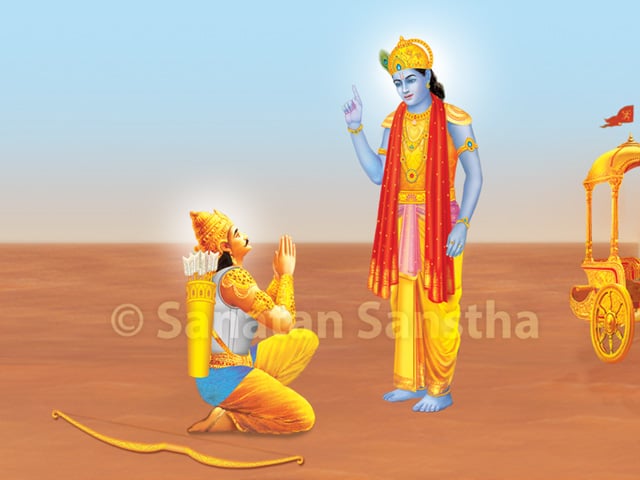 Performing karma as expected by the Hindu Dharma and the scriptures, by sacrificing the attachment and the expectations of the fruit, is a supreme definition of Karma-yoga. This article elaborates on doubts that arose in Arjun’s mind regarding Karma-yoga, on seeing his own relatives and friends in the form of enemies on the battlefield, and clarifications provided on principles of Karma-yoga by Shrikrushna to him.

A. Renunciation is better than fighting with our own family and friends

At the very commencement of the battle (of Mahabharat) Arjun sees that his own relatives and friends are his enemies. Seeing them, Arjun is confused and, under the guise of renunciation, decides not to abide by the duty of a Kshatriya (Warrior), that is, fighting on the battlefield. ‘Renunciation is better than fighting’ he proclaims. His intellect is deluded because of the emotion of love, and as a result he wrongly perceives the concept of Yudhha-karma (Duty in war) that is prescribed by the scriptures for the Kshatriyas.

B. Which is superior – Dnyanyoga (Path of Knowledge) or Karma-yoga ?

2. Clarification of doubts by Shrikrushna

A. Shrikrushna explained the principles of Karma-yoga to Arjun to fulfil the duty of a Guru

Arjun’s antahkaran is perturbed by doubts, constructive-destructive alike. Hẹ asks God, “O Shrikrushna, I am utterly confused. You insist that I participate in the battle. It is for this reason that you are trying to influence me with the concept of nishkam (Without expectations) Karma-yoga, is it not ?” Shrikrushna’s face shows signs of disturbance. He replies, “No, Arjun, this is incorrect. You have taken refuge in Me, you have surrendered unto Me. Instead of considering Me to be your companion, you have instated Me to the supreme pedestal of a Sadguru. I am now under the obligation to fulfil the responsibilities that follow. I am attempting to present before you the philosophy of an articulate way of life that will successfully fulfil the mission of your life. Can a Guru ever hide anything from a disciple who has surrendered unto Him wholeheartedly ? Now there is nothing that cannot be given to you. My effort is to make you aware of a way of life which is extremely gratifying, stable and peaceful.”

B. Kindness, forgiveness and compassion are benevolent bhav (Spiritual emotion), but if they are awakened in the wrong situation, they become malevolent

Bhav of kindness, forgiveness and compassion arose in Arjun’s mind on the battlefield. These bhav are benevolent; but their awakening on the battlefield is incorrect. Hence, to become aware of this unknown sorrow arising from ignorance, God imparted knowledge to Arjun.

A beautiful and virtuous woman does not tolerate a rival in her husband’s life; likewise, when the rival in the form of compassion arrives, the virtue of bravery moves away.

C. It is essential to follow swadharma (One’s own Dharma; that is, duty of a Kshatriya)

Before the Mahabharat battle, Kouravs had done injustice to the Pandavs. Despite this, Arjun, out of attachment for the Kouravs, forgot his duties and said that he would not fight the Kouravs. In reality, the battle was justified by the scriptures and was in keeping with his duties. Yet, Arjun questioned, “Will I not beget demerit of killing Gurus and Brahmans if I fight this battle ?” In reply to this doubt, Shrikrushna said, “There is no reason to fear while abiding by swadharma. For a Kshatriya, there is no duty more meritorious than fighting a Dharma-yuddha (Battle for Dharma). Whosoever comes forward with the intention to combat, wage a battle against him – that is what the Kshatriya-Dharma is all about. A Kshatriya should never flee from the battlefield. Protection of the society and safeguarding of the earth in a righteous manner are the prime duties of a Kshatriya.” – Shrimadbhagwadgeeta, 2.31

Meaning : If, filled with self-conceit, you think ‘I will not fight,’ vain is this resolve of yours; your Prakruti will constrain you.

Meaning : Fettered, O son of Kunti, by your own karma, born of your own nature, what you, from delusion, desire not to do, you will have to do in spite of yourself.

That is precisely the reason why Shrikrushna preached to Arjun thus – तस्‍मात्‌ युद्धस्‍व भारत |, meaning, hence, O Bharat (Arjun), you should wage a battle.

D. Evading fighting a Dharma-yuddha will lead to sin and dishonour

O Arjun, if you evade this Dharma-yuddha,

If a warrior fleeing from the battlefield out of fear is killed by the enemy, then he has to face the demerit of his master and whatever little merit he begets goes to his master.

E. It is a duty to annihilate a person who attacks you with the intention to kill

Arjun asks, “O Shrikrushna, the scriptures advise not to kill a jiva (Embodied soul), to avoid violence (न हिंस्‍यात्‌ सर्वभूतानि |), never to kill a Brahman (ब्राह्मणं न हन्‍यात्‌ |)”. Shrikrushna replies, “If a Guru, child, elderly person or a Vaidik Brahman holding a weapon attacks like an enemy, as a reckless assailant with the intention to kill, then indeed he should be annihilated. That itself is Dharma”.

F. Violence in war is not sin

To fight is Kshatriyadharma. Violence in a battle is not a sin, but fleeing from the battlefield is a sin.

G. Prarabdha-karma should not be shirked

Arjun asked, “O Shrikrushna, battle is a kamya-karma. Then, why should I bother about it ?” Shrikrushna replied, “Dear Arjun, whatever kamya-karma comes your way due to your prarabdha has to be performed compulsorily. Remember, you are a Kshatriya due to your prarabdha. You cannot evade Kshatriya-karma. Prarabdha-karma purifies the chitta, after which self-realisation does not remain a distant reality”.

Shrikrushna advises Arjun, “Your right is restricted to merely performing karma, and not to expect the fruit. Do not perform karma with the expectation of fruit. At the same time, do not even insist on not performing karma”. – Shrimadbhagwadgeeta, 2.47

3. Reasons for decline of Karma-yoga

A. Opposition to Karma-yoga due to following other Yogas such as Sankhyayoga, etc.

From the time of King Ikshawaku, by tradition, several righteous Rajarshis followed Karma-yoga. One who adopts a way of life of a Sage, despite being a king, he is a Rajarshi. Several kings such as Mandhata, Dilip, Bhagirath, Janak & Ajatashatru were Rajarshis. Several of these Rajarshis followed Karma-yoga. Over a period of time, this Yoga, which was followed traditionally, declined in the intervening period. Ideologies like Sankhyayoga, etc. gradually assumed importance. Their imposing nature gave rise to opposition, which resulted in the decline of Karma-yoga.

B. Karma-yoga takes a long time to yield fruit, whereas an ordinary individual desires instant results

Traditional Yoga implies Karma-yoga dedicated unto God. The obvious fruit of such nishkam Karma-yoga is Amrutattva, Mukti (Liberation). This, however, does take a long time to attain. If Karma-yoga is followed birth after birth, Mukti is attained. An average individual on the other hand expects instant results. In fact, his entire struggle is focused on the result. Obviously, he is reluctant to practice Karma-yoga.

The more profound, subtle and pure the antahkaran is, the more expansive it becomes. Attaining the fruit of nishkam Karma-yoga (Amrutattva) takes efforts of a few births. That itself is the final objective, the ultimate goal of human life. Due to the dwindling of Rajarshis and Karmayogis who practised nishkam-karma, Karma-yoga also declined. – Shrimadbhagwadgeeta, 4.2

So long as the tradition existed, Karma-yoga flourished. As the concentration of Raja–Tama components in the atmosphere increased, worldly attachment and indulgence also increased, leading to neglect of Karma-yoga. It no longer held importance from a human perspective. Supreme God is perpetual and eternal. He is indestructible. The Paths to attain Him too are infinite. Dnyanyoga, Karma-yoga and Bhaktiyoga (Path of Devotion) are all eternal and infinite. They too are perpetual. When the sun is covered by clouds, the sunlight may cease to exist, yet the day still exists. It does not get destroyed. Sunrays also exist. It is through the medium of these rays that we can reach the sun of knowledge. The ray is a proof of the existence of the sun. It establishes our contact with the sun. The rays have existed since ages. The universe undergoes Dissolution. All Yogas (Paths) are lost. They are not destroyed but become invisible. They remain in unmanifest state; however, they are not entirely unavailable. Yogas are eternal, everlasting. The statement that Karma-yoga became invisible, was destroyed means, for a long time individuals who understood the secret of that Yoga, became rare. The reasons for it becoming invisible are multifold. Moreover, at the time of Dissolution, Karma-yoga merges with Supreme God, the Adishakti (Primal Divine Energy).