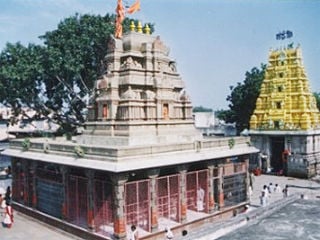 The birthplace of Shri Nrusinha Sarasvati. It is known as Lad – Karanje. Brahmanand Sarasvati of Kashi first built a temple of Deity Datta here.

In the four months of chaturmas of the Hindu lunar calendar Shri Nrusinha Sarasvati lived here. This place is situated at a distance of 10 kilometres from Bhilvadi railway station in Maharashtra, on the banks of the river Krushna.

This is located in Maharashtra. Shri Nrusinha Sarasvati lived here for twelve years. The confluence of the two rivers Krushna and Panchaganga occurs here. This is the place which inspired Tembeswami.

This is situated in Karnataka on the Pune – Raichur highway. The confluence of the rivers Bhima and Amaraja occurs here. It is here that Shri Nrusinha Sarasvati spent twenty-three years and carried out His entire mission. Later He proceeded to Shri Shailya from here.

This is an island in the waters of the Krushna river in Karnataka. One can reach this destination by road from Raichur till Palladini (Kurguddi). This is where Shripad Shrivallabh undertook His mission.

The birthplace of Shripad Shrivallabh, in Andhra Pradesh. It was Tembeswami who brought this place into the limelight

Here, the Dattatreya math (A residence of Ascetics) is situated on the Narad ghat. The family members of Shri Nrusinha Sarasvati who still live here have the surname, Kale. Later, the name Kale was changed to Kaliya. Even today a garden and a lane named Kaliya exist here.

This is at a distance of 35 kilometres from Kathmandu.

Some prayers to be made unto Deity Datta

1. O Deity Dattatreya ! My earnest prayer at your Holy feet is that, just as you learnt from the virtues of twenty four Gurus, let me also develop the attitude of being able to imbibe virtues from others.

2. O Deity Dattatreya ! My earnest prayer at your Holy feet is that, protect me and let your protective sheath remain continuously around me.