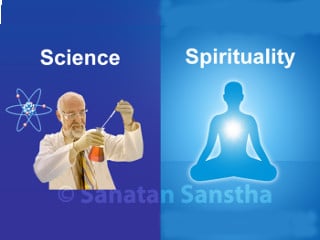 Through physical sciences, only the gross can be understood. That which is beyond the five sense organs, mind and intellect is the subtle. Ability to understand the subtle is developed through Spiritual practice. Physical science is only able to impart us object related happiness, however Spirituality is capable of imparting supreme Ānand (Bliss) and Omniscience. Spirituality is not a subject to be understood at an intellectual level; instead, we need to practically follow it and obtain spiritual experiences.

1. Limitations from Happiness-Unhappiness point of view

A. Science cannot save us from unhappiness every time

Many problems occur due to severity of spiritual causes, such as, a person being a regular patient or not getting cured despite a lot of medical treatment, a good-looking graduate girl not getting married despite intensive efforts, a person not being able to bear a child, or if he bears one, the child is handicapped etc. There is a spiritual reason for 80 percent of unhappiness in man’s life in less or more proportion. Science cannot eliminate the spiritual causes. Therefore, naturally it also cannot eliminate the unhappiness created by such causes. There is only one way to overcome the spiritual causes of unhappiness and that is by performing sādhanā (Spiritual practice).

Due to new inventions, has man really gained happiness ? New inventions of science may give physical happiness to man; but since true happiness depends on the state of mind, no matter how many inventions take place, man will never become happy.

D. Increase in man’s unhappiness and downfall of moral values due to science

No matter how much progress modern science makes, since it has increased man’s sense of gratification, he is gradually becoming Tama–predominant. Since western countries have become Tama-predominant, immorality is rampant in their society. Today, as leaders of those nations are unable to get any solution to eradicate immorality in the society, they have become restless.

2. Science is incomplete, untrue and transient, whereas Spirituality is complete, true and eternal

A. The ‘Truth’ in science constantly undergoes changes

For example, earlier it was believed that the earth was flat. Then it was discovered that the earth is round. After some years, scientists found that the earth is not round, but geoid. Thus, there are constant additions in scientific knowledge. The ‘Truth’ in science constantly changes. Hence, revised editions of science subjects are published. From this, it is clear that science is untrue and incomplete. Thomson, a well-known scientist, has said, ‘Incomplete science has nothing to do with the final Truth. Science should understand its own limitations’.

B. The ‘Truth’ in Spirituality never undergoes change

3. What a person understands immediately through sādhanā, takes several years, enormous funds and huge manpower for science to understand

Today science claims, “After visiting Mars we will have crossed a great milestone in the annals of science and will know if there is existence of life there”. Dr. P.V. Vartak from Pune went to Mars through meditation. The observations he made on Mars corresponded with the observations of NASA (National Aeronautics and Space Administration – America’s space agency) quite a bit. In Spirituality, visiting Mars with the subtle body and returning to earth is like a child’s play, or at best it can be termed as the mind has been ‘purified’. Hence, physical sciences are the first step in the learning process, while Spirituality is the final one.

4. Through science, only gross knowledge is obtained; whereas, through Spirituality (Meaning, sādhanā here) along with the gross, we obtain knowledge of the subtle.

8. The immortality of the Nation is decided by the establishment of Dharma, not by scientific progress

Dharma which nurtures man is the soul of a Nation. Hence, a Nation which has no place for Dharma becomes soulless. Such a Nation disappears in course of time. Conversely, a Nation based on Dharma lasts for a long time.

If devices to record subtle events are invented, then at the most they will be useful for documentation and not for bestowing the actual experience; whereas, it is important to actually experience them. If scientists discover the Neelbindu (A blue dot experienced by evolved seekers at the zenith of meditation) with the aid of scientific devices, they will accept its existence, contemplate on it for several years, hold discussions and write thesis on it. However, it is more important to meditate and become introverted so as to actually experience the Neelbindu than to do all this.