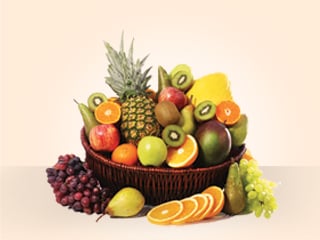 1. Seasonal Diet – Research conducted on the diet on the basis of electrosomatographic science

With the help of modern scientific technology, Sanatan Sanstha conducts research to verify the spiritual inferences. Electrosomatographic scanning is a technique in which with help of computerised systems, we obtain readings about bioelectric regulatory zones associated with the seven Kundalini chakras of Muladhar, Swadhisthan, Manipur, Anahat, Vishuddha, Adnya and Sahasrar. These readings are available in the form of bar graph diagrams and unit statistics. These will be henceforth referred to as ‘readings related to seven chakras’.

In both the experiments, attention was paid to the proportion and direction of the changes in the statistical readings associated with the seven chakras, after the diet was consumed when compared to the original readings taken before the consumption of specific diets. If the statistical difference is more than ten, then the inference is considered significant.

1.1 An experiment after consumption of a non-vegetarian diet

The bar diagram given below demonstrates the seeker’s original reading before he consumed a non-vegetarian diet. Below is the bar diagram 21 hours and 16 minutes after the seeker consumed a non-vegetarian diet. In this too the names of chakras are presented as in the earlier diagram. 1.2 Seasonal Diet – An experiment after consumption of a vegetarian diet

The bar diagram given below demonstrates the seeker’s original reading before he consumed a vegetarian diet. The bar diagram below has been taken 3 hours and 57 minutes after the seeker consumed a vegetarian diet. In this also the names of chakras have been shown as in the earlier graph.

In Hindu Dharma every action has been determined taking into consideration man’s physical, mental, intellectual and spiritual development. Rules about diet have also been formulated keeping in mind these objectives. Following is the information regarding the same as given in Hindu Scriptures.

2.1 Reason for formulating rules about a vegetarian diet and its association with Vowed religious observances, ethics and penance

If one wants to inculcate certain qualities, one should consume food accordingly for twelve years. This will facilitate the inculcation of specific qualities. Keeping in mind this tenet, authors of the Scriptures have formulated some rules about diet. Following these rules in daily life for three years is considered as ‘Vowed religious observance’. If followed for seven years it is a ‘rule’ and if for twelve years, then it is ‘penance’.

2.2 Some rules of diet according to the seasons

In day-to-day life, fresh and hot food should be consumed. Climactic changes in each season influence man’s physique, mind, intellect and his entire lifestyle. Hence it is beneficial to make changes in our diet according to seasonal changes and adhere to seasonal diet. In a vast country like Bharat, the climate and seasons vary in North Bharat and South Bharat. This difference needs to be kept in mind while observing dietary rules pertaining to the seasons.

Appropriate diet for the spring season (Vasant): During the spring season there is an increase in the Kapha-dosh. So items which are easy to digest, dry, bitter, astringent and pungent such as green gram, fenugreek, bitter gourd, radish, raw turmeric,  pepper and dried ginger should be consumed. In spring season, it is beneficial to avoid a diet which contains sweet, sour and salty items or if at all, to consume them in small quantity. During this season, it is very healthy to adhere to the rule of not consuming salt.

Diet fit for summer season (Grishma): Digestive energy decreases during the summer season. So a diet which is easy to digest, mild, sweet, sour and juicy, and contains items such as milk, butter, ghee, coriander, cumin seed, cardamom is beneficial. Drinking more water is also beneficial.

Diet fit for rainy season (Varsha): There is possibility of increase in Kapha-dosh during the rainy season. Hence it is beneficial to consume food items such as millet, rice, lady  fingers, lemon, ginger, garlic, turmeric, coconut, sesame oil, milk and milk products.

Diet fit for winter season (Hemant): Digestive energy increases during the winter season. So it is beneficial to consume new grains, green gram, sesame, black gram, carrot, custard apple, dry fruits, ghee, all kinds of spices and food which is tasty and oily.

Diet fit for cold season (Shishir): In the cold season too digestive energy is optimum. During this season, it is beneficial to consume sweet, sour and salty diet such as sesame, green peas, brinjal, beat, fenugreek, spinach, pomegranate, dry fruits, milk and milk products, butter milk along with new grains.

2.3 Some common rules about diet

About consumption of diet, Maharshi Charakacharya says in the Charaksanhita :

So long as man eats because of desire, his subtle body is nurtured, but then he can fall ill if he eats in spite of lack of desire. Eating food in a quantity sufficient for the body’s needs prevents illness. This is a spiritual practice in itself.