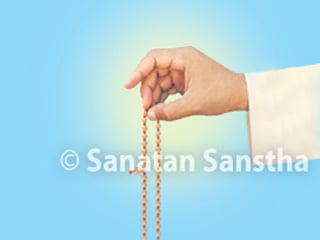 Continuity in spiritual practice is achieved only through chanting. The Name is both the tool and the target. The ultimate objective is to merge with the Name.

3. How does ‘repeating (chanting) The Lord’s Name’ work?

‘The subconscious mind carries millions of impressions, to erase even a single one of which would take a very long time. As such, a considerable period of time would be wasted in overcoming the tendencies of the subconscious mind by following restraints and regulations (yam-niyam). It is much more important to make continual efforts to blend with The Absolute Being (Purush), rather than to try and erase such impressions from the mind, which arise from Prakruti. This is precisely what can be achieved by repeating (chanting) The Lord’s Name. The mind, intellect, subconscious mind (chitta), among others, are all constituents of Prakruti and these function according to their own characteristics. Instead of wasting one’s spiritual practice (sadhana) in resisting them, one would achieve one’s goal faster, if that practice is utilized to progress towards the God principle (Purushtattva) by becoming one with the Name (of God) that one repeats (chants).’ – Saint Bhaktaraj Maharaj

5. Which Name should one repeat (chant)?

5.1 Repetition (chanting) of The Lord’s Name to eliminate distress due to distressing energies

Before commencing this spiritual practice, it is extremely essential to find out for oneself if one is afflicted by distressing energy or not and make efforts to overcome it, if present. The following explanation will illustrate its importance.

5.2 Name of one’s favourite deity [benevolent (ishtadevata)] or that recommended by the Guru?

The deity which is responsible for spiritual progress such as the family deity or the deity whose Name is given by the Guru as Gurumantra for chanting, is known as the benevolent deity (ishtadevata). Despite this being so, most consider the deity bestowing worldly benefits or the deity of one’s liking as the benevolent deity. One should repeat (chant) the Name imparted by the Guru instead of chanting the Name of one’s favourite deity for the following reasons.

5.3 Which Name does one repeat (chant) if the Guru has not imparted a Name?

In this case one should repeat (chant) the Name of the family deity (kuladevata), which refers to both the male or the female family deity.

A. For whom is it useful? : Importance of repetition (chanting) of the Name of the family deity is given in ‘5.3’. The point elucidates why repetition (chanting) of the Name of the family deity is essential for a seeker in the primary stage. The stage of repeating (chanting) the Name of the family deity may have been completed by those who have attained a spiritual level of at least 50% through spiritual practice. Generally, this stage can be completed in the present birth after undertaking the spiritual practice of merely repetition (chanting) of The Lord’s Name for some years (approximately 15 to 20 years) or if an individual is born in the same family then sometimes it may even have been completed in the previous birth. If one renders service and makes sacrifice in addition to repetition (chanting) of The Lord’s Name then this stage can be completed even in 5 to 6 years. For further spiritual progress, it is beneficial if seekers who have completed this stage, repeat (chant) the Name of some superior deity rather than that of the family deity. One can decide which Name of The Lord is essential for one from those of various deities by repeating (chanting) the Names of various deities according to the specific method of experimentation. The Lord’s Name found by this method of experimentation should be considered to be the gurumantra itself. However if one begins to experience distress due to distressing energies when repeating (chanting) it then one should stop it. Then the experiment of finding The Lord’s Name to overcome distressing energies as given in point ‘5.1’ should be performed and one should repeat (chant) The Lord’s Name found through it. After the distress due to distressing energies is totally overcome, one should carry out the experiment once again and start repeating (chanting) The Lord’s Name which is essential for one’s spiritual progress.

When addressing someone instead of simply using his name, one refers to him respectfully as Shri. (Mr.), Smt. (Mrs.), etc. Similarly, one should chant the Name of the family deity in a way which expresses respect for the same. Shri should prefix the Name of the family deity, the Name that follows should be in dative case (chaturthi pratyay) and should conclude with namaha. For instance if the family deity is Ganesh then ‘Shri Ganeshaya namaha’, if it is Bhavani, then ‘Shri Bhavanidevyai namaha’. Since it is difficult to pronounce ‘Shri Bhavanyai namaha’ one should use devyai.

The following table shows how the dative case is to be applied. The dative case means ‘to’, i.e. ‘I pay obeisance to Lord Ganapati, to the female deity’).

A. Prefixing Shri or Om to the Name: Generally Shri or Om is prefixed to the Name. The importance of this prefix is given in ‘Science of Spirituality: Chapter 10 – Path of Mantra (Mantrayoga) point – Parts of a mantra’. The comparison of Shri and Om is given in the following table.

Note 1 – Beyond a level of 60% often one concentrates on Bliss (Anand) instead of the word.

Generally women are more likely to be affected than men. This point will be clear from the following. The frequencies generated from Om generate a lot of energy (heat) in the body. This does not affect the male reproductive organs as they lie outside the body cavity. However, in case of women this heat can affect the reproductive organs as they lie within the abdominal cavity. Thus women may experience distress. They may suffer from excessive menstrual flow, amenorrhoea, dysmenorrhoea, infertility, etc. Hence, it is advisable for women not to prefix Omkar to the Name unless recommended by the Guru; for example they may chant namaha Shivaya instead of Om namaha Shivaya. Otherwise they should use Shri as a prefix. Women having a spiritual level of more than 50% can prefix The Lord’s Name with ‘Om’. When repetition (chanting) of The Lord’s Name is undertaken for a particular reason, eg. for overcoming distressing energy, it is necessary to prefix ‘Om’ to The Lord’s Name. At such times, one should not stretch the pronounciation of ‘Om’.

Note 3 – As ‘Om’ has a lot of energy, if for a specific purpose, eg. if it is necessary to repeat (chant) the Name of some other deity for overcoming distressing energies, one should prefix it with ‘Om’, eg. ‘Om Gang Ganapataye namaha’ is repeated (chanted) instead of ‘Shri Ganapataye namaha’.

5.6 One should not repeat (chant) the name of a saint

One should not repeat (chant) the name of a saint for the following reasons.

6. Where should one repeat (chant) The Lord’s Name?

Since everything is created by God Himself one can chant His Name anytime, anywhere. Chanting when carrying out day-to-day activities is a superior form of practising Spirituality in comparison to chanting done seated in one place. This is so, firstly, because with the former, spiritual practice becomes continuous. Secondly performing worldly activities along with chanting of The Lord’s Name renders them as good as not being in the Great Illusion (Maya). Thus, it helps one to remain in communion with The Lord under all circumstances. This is called sahajasthiti or sahajavastha.

7. Repeating (chanting) the Name with faith and righteous behaviour

The one who repeats (chants) the Name of Lord Viththal should observe restrictions. – Saint Tukaram

Implied meaning: If the one repeating (chanting) the Name of The Lord does not observe the restrictions of righteous behaviour then the entire spiritual practice is wasted in nullifying the resulting defects. Thus no spiritual progress occurs; for instance if one abuses then 30 rosaries (malas) of chanting (japa) are wasted; if one accepts a bribe then 500 rosaries of chanting are wasted.

8. Synchronising chanting with the breath

One remains alive due to respiration and not due to chanting. Hence, one should synchronise chanting with the breath by concentrating on the breath.

The benefits of chanting with the breath are as follows.

Those whose repetition (chanting) of The Lord’s Name occurs spontaneously, need not synchronise it with the breath.

9. Other thoughts during chanting

Despite experiencing Bliss with the Name, why does the mind wander towards other thoughts? What should one do when one cannot concentrate on chanting? Initially, due to impressions in the subconscious mind (chitta) stray thoughts enter the mind while chanting. But with practice there is a gradual reduction in these thoughts. One should keep in mind that concentration is the target, not the tool.

10. Methods of chanting in some religious orders

We have already discussed that from the stage of mental worship (upasanakand) repeating (chanting) The Lord’s Name is a superior form of practising Spirituality. Followers of all religious orders should chant the Names of their respective deities. That itself results in their spiritual progress. There is no need to change one’s religion. God chooses one to be born in that particular religious order which is most conducive for one’s spiritual progress. At a lower level the Name is related to the religious order. Later, all have the same religion – the Sanatan Dharma (Religion).

The reasons for it are given below.