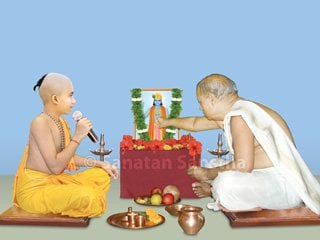 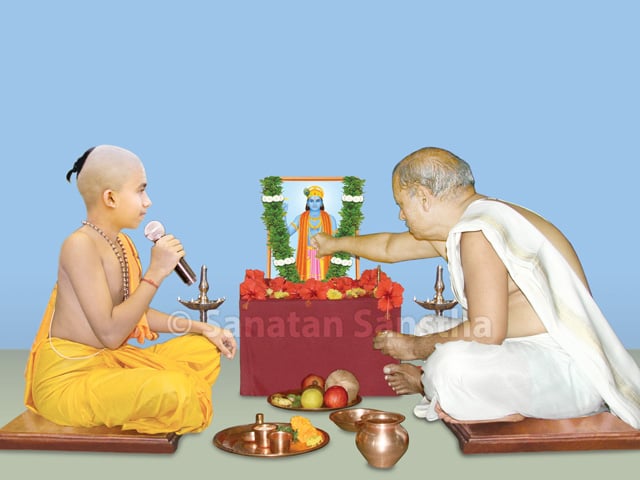 According to the Hindu lunar calendar, Lord Krushna was born on the eighth day (ashtami) of the second (dark) fortnight of the month of Shravana. Five thousand years ago, He incarnated, at the end of the third cosmic era, ‘Dwapar Yuga‘ and the beginning of the present era, ‘Kali Yuga‘. The divine principle (tattva) of Lord Krushna is most active on this day of the year.

At midnight, the ritual of waving lit lamps (aarti) is performed. Krushna Jayanti is especially significant from the viewpoint of establishing Righteousness (Dharma), and surrendering unto The Lord.

Shri Krushna Chant to benefit most from Krushna principle

On this day, also known as Janmashtami (gokulashtami), the Shri Krushna’s Principle is thousand times more active as compared to other days. On this day, chanting ll Om Namo Bhagavate Vasudevaya ll and worshipping Shri Krushna with bhav (Spiritual emotion) helps in obtaining maximum benefit of His principle. Chanting of His Name invokes His presence within oneself since God and His Name are one. All the qualities that are in Shri Krushna are there in His Name. Thus, repeating His Name will surely herald His presence and blessings in life.

Therefore, to derive maximum benefit from Krushna Jayanti, devotees can daily make conscious efforts through chanting and prayer to surrender at the Lord’s lotus-feet. Such spiritual practice would equip one to participate in establishing Righteousness by spreading the importance of Spirituality to others, removing misconceptions about it and helping curb incorrect practices. 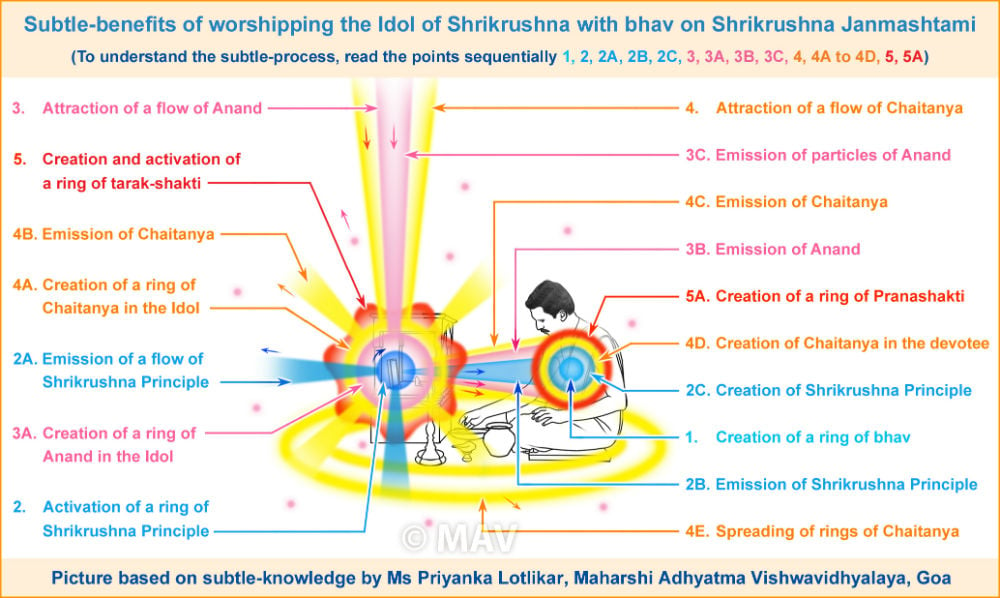 Significance behind the celebration

Krushna Jayanti is especially significant from the viewpoint of establishing Righteousness (Dharma), and surrendering unto The Lord. His teachings in essence

During the Mahabharat war Lord Krushna uttered 700 shlokas (holy verses) in the form of the ‘Bhagavat Gita‘ to convince the reluctant Arjuna to fight his own kith and kin to reinstate Righteousness (Dharma). The Lord finally uttered the essence of His teachings in the following verse (18/66) : “O Arjun! Forsake all your personal beliefs and surrender to me. Do not lament, for I shall deliver you from all sins.”

Not only is His principle (tattva) most active on Krushna Jayanti, but in present times His energy is 100% manifest, and He rushes to the aid of the devotee who surrenders unto Him. His devotee long to feel closer to Lord Krushna every day and not just on Shri Krushna Jayanti. To invoke Lord Krushna’s principle the best solution is to repeat Lord Krushna‘s Name as follows: “Om Namo Bhagavate Vasudevaya” continuously through every action. Kala is a mixture of various eatables, curd, milk and butter. When grazing the cattle with the cowherds in Vraj, Lord Krushna mixed the food brought by His companions with His own, to make a kala and ate it along with them. In keeping with this story, later it became customary to prepare kala and break a hanging pot of curd on the day after Gokulashtami. Stop the malpractices occurring in the name of Dahikala

Of late, in the name of Dahikala, malpractices such as extortion, obscene dancing, eve-teasing, group of girls breaking handis (pots) etc. have become very common. Due to these malpractices, the sanctity of the festival is lost. As a result, not only the benefit of the Shri Krushna Principle is lost, but severe damage is caused to Dharma. The sanctity of the festival can be retained and it can be beneficial for everyone only if there is an attempt to stop such malpractices. Preventing such malpractices also amounts to samashti (serving the society) worship of Shri Krushna.

Today, Deities are being denigrated in various ways. For example, the Hindu-hater artist MF Husain sketched nude, vulgar pictures of Sita seated on the lap of Ravan and Hanuman in front of him, and exhibited them for sale. Deities are insulted through speeches and books etc. Deities are also used as models in advertisements to promote products. People in the attire of Deities beg for alms. In the denigrating Marathi play ‘Hari Aala
Dari’, Deity Vitṭhal has been shown roaming around with a brick in His hand. In one scene, He is shown making an excuse of being ill. Deity Vitṭhal has been shown delivering a dialogue that ‘Krupashankar Acharya has said that, since you are suffering from Asthama, for climate change you need to go to Kashmir’.

Faith is the foundation in the worship of Deities. Denigration of any kind is a blow to the faith of the devotees. Hence, this amounts to harming Dharma. Preventing harm to Dharma in the present times amounts to abiding by Dharma and is worship at the samashṭi level. Without this samashṭi worship, the worship of Deities cannot be complete. Therefore, devotees of Shrīvishṇu should be vigilant in preventing harm to Dharma. Sanatan Sanstha is legitimately working in this context. You too can participate in the activities of Sanatan Sanstha in this regard.