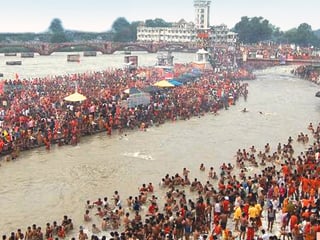 Kumbh Mela is the biggest Hinduism fair and a spiritual congregation held every 12 years in four Holy cities Prayag (Allahabad), Haridwar, Ujjain and Tryambakeshwar-Nashik in India. ‘Unity of Hindus’ is the main objective of the Kumbh Mela. The 4 places of ‘Kumbh Mela’ are symbols of 4 directions. These ‘Kumbh Melas’ used to be held even before modern means of transport were invented by man.  During that time, it was not easy to come together from 4 directions of Bharat and therefore, these ‘Kumbh Melas’ become the common point of symbols of Hindu unity and culture.

During the Kumbh mela, millions of devotees from all around India and overseas congregate to perform religious rituals such as bathing in River Ganga, performing spiritual practice, donating, Pitrutarpan, ritual of shraddha, darshan of Saints, debates on Dharma etc. This is a congregation of those who have faith in Dharma. It is a unique occasion when not only devotees, but Deities, Sages, Saints and 330,000,000 tirthas too come to the Kumbh mela.

This pilgrimage (every 12 years) by Hindus to obtain the spiritual benefits at these Holy places is known as Kumbh mela.

2. Other names of Kumbh mela

Every 12 years, a Kumbha Mela is held at the Triveni Sangam of rivers Ganga, Yamuna and Saraswati in Prayag. It is called ‘Mahakumbh Mela’.

This is a name is given to Kumbh mela held at Ujjain and Tryambakeshwar-Nashik.  When Jupiter alone, or along with Sun are in Leo sign of the zodiac, the Kumbh mela is also referred to as Simhastha.

The origin period of Simhastha Kumbh Mela and Godavari is the same. Sage Gautam performed rigorous penance to wash off the sin of killing a cow and with the power of his penance, asked Bhagawan Shiva to send Ganga from Heaven to the Earth. As a result, Ganga descended at Tryambakeshwar with the new name of ‘Gautami’ or ‘Godavari’. Godavari descended onto the earth when Guru Planet was in Simha zodiac sign.

When there were only seven Gods, seven Sages and seven human  beings  on  the  earth,  Gautami  existed  with  them;  hence, Godavari  is  respected  as  the  ﬁrst  and  most  superior  river.

The Kumbh Mela is also important from the scientiﬁc perspective along with cultural, religious, spiritual and historical perspectives. Effects created in the environment due to speciﬁc planetary position during the Kumbh Mela is beneﬁcial for spiritual practice and religious rituals. For this purpose, Sages, Seers and devotees visit the place of the Kumbh Mela during the Kumbh Parvakal and perform religious rituals such as bathing in River Ganga, worship of Deities, Pitrutarpan (Offering water to deceased ancestors), shraddha, Yadnya-yaga, offering donations, meditation, penance and spiritual practice.

In order to understand the spiritual significance of kumbh mela, let us understand the the objective. The objective of Kumbh Melas during the Kumbha Parva in four pilgrimage places or Ardha Kumbh Melas throughout Bharat is spiritual in nature. Devotees who come from distant places at the Holy pilgrimage places such as Haridwar, Prayag etc. should avail of the opportunity of the Kumbh Parva to take a merit-bestowing Holy bath in the Divine River Ganga and obtain spiritual knowledge by listening to spiritual discourses of Sages and Saints. The purpose of the Kumbh Melas from the spiritual perspective is that devotees should progress spiritually by performing spiritual practice such as meditation, donation, Yadnya, penance, chanting etc. and obtain further momentum after death.

4. Crores of devotees are its extent of pervasion

Information of holy ‘Kumbh Mela’ is available only in Almanacs;

still millions of Hindus gather every 12th year without any invitation. This is the vastness of Hindu Dharma !

In the year 1942, Lord Linlithgow, the Indian Viceroy saw the ‘Kumbh Mela’ at Prayag while travelling with Pandit Madan Mohan Malviya on an aeroplane. He was astonished to see the sea of millions of devotees and he curiously asked Pt. Malviya, “The organizers must have taken lot of trouble to gather people in ‘Kumbh Mela’; isn’t it ? How much the organizers must have spent ?” Pt. Malviya said, “Only two paisa!” Listening to this answer, Lord Linlithgow asked Pt. Malviya, “Panditji, are you teasing me?”  Pt. Malviya took put a copy of almanac from his pocket and handing it over to Lord Linlithgow, he said, “This costs only two Paisa. People come to know about the holy period of ‘Kumbh Mela’ through this. Accordingly, every one of them gathers for holy bath on their own. Nobody is given personal invitation.” (‘Keshav-Samvad’, 27.7.2007)

5. Yearning to have holy bath in River Ganga as it awakens

the feeling of detachment in devotees including physical awareness

Nobody pays attention to clothes worn by the participants in ‘Kumbh Mela’. When a nude ‘Sadhu’ takes a plunge in River Ganga along with his ‘Akhaada’, one feels nice to look at such scene. Here, people forget their identity whether they are man or woman; forget about physical desires. People don’t notice whether a person is dressed or not; such a thought does not occur to anyone. Many women are seen drying their saris; but nobody even looks at them. The students of Science of sexuality should visit ‘Kumbh Mela’. In that atmosphere, sexual desire is not felt. They may feel such study is challenging. There is no question of molestation of women, rape, indecent behavior or problem of law and order ! The only yearning everyone has is getting an opportunity to have a Holy bath in the Ganga! (Dainik Loksatta’, 06.02. 2001).

6. Discourses by ‘Sadhus and Saints’ on

Dharma and Spirituality drawing devotees to them in ‘Kumbh Mela’

During ‘Kumbh Mela’, ‘darshan’ of Saints gives a treat to eyes of devotees; whereas discourses and lectures on topics like Dharma, Spirituality, ‘Ramayana’, ‘Mahabharata’ etc. are inspiring treats to the ears of devotees. About 10,000 pandals are erected at the venue and in most of these pandals, discourses on religious subjects are held every day.

In pandal of every Sect or ‘Akhaadas’ the common thing that goes on throughout the day is ‘Anna-chhatra’ run for devotees. There might not be a single ‘Akhaada’ where ‘Anna-chhatra’ is not run. There are many such ‘anna-chhatras’ run during ‘Kumbh Mela’ which provide food for the devotees; else, more than 75 lakh devotees gathering for ‘Parva-snan (Holy bath)’ would have had to lit fire for cooking food, and it would have required a very big space !  — Dr. Durgesh Samant.

8. Disparities in society are forgotten in

gathering of devotees through the medium of ‘Anna-chhatra’

Few rich ‘Akhaadas’ run ‘Anna-chhatras’ during Kumbh Mela. Generally, it is a feeling amongst people that ‘Anna-chhatra’ means where food is provided to the poor; but during ‘Kumbh Mela’, there is a base of spirituality to these ‘Anna-chhatras’. Here, a devotee, who is a millionaire, is seen having food as ‘God’s Prasad (Holy sacrament)’ sitting next to a poor beggar. (‘Dainik Loksatta’, 6.2.2001).

9. How are the Kumbh mela dates decided?

The place where Kumbh Mela should be held and its timings have the foundation of planetary calculations. The Moon (Chandra), Sun (Surya) and Jupiter (Guru) provided unique assistance to Gods in the battle between Gods and demons for protecting the Amrutkumbh, the timeframe of the Kumbh Mela is decided when their speciﬁc alignment occurs in the zodiac. The Jupiter (Guru) played a significant role in fighting with the demons, hence its alignment is considered crucial for deciding the place and dates of Kumbh Mela.

When Jupiter enters the Aquarius and Sun enters Aries, the Kumbh Mela is held at Haridwar.

When Jupiter enters Aquarius and Sun and Moon enter Capricorn on Magha Amavasya, the Kumbh Mela is held at Prayag (Allahabad).

When Jupiter enters Aquarius, Ujjain gets the honour of holding the Kumbh Mela.

When Sun and Jupiter enter Leo of the zodiac, the Kumbh Mela is held at Tryambakeshwar – Nashik. (Sanatan Sanstha’s Holy text, ‘Glory of the Kumbh Parva’)