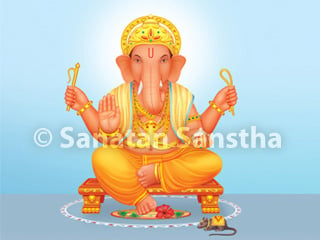 1. Fulfilling of wishes through Sankashtachaturthi vrat

Many people perform Sankashtachaturthi vrat for the fulfilment of their worldly desires. The Sankashtachaturthi vrat is recognised for providing Adhidaivika solutions to the problems in life. Acquiring solutions to problems in life through the grace of a Deity is known as ‘Adhidaivika-upaya’. Many people feel it is inappropriate to do ritualistic worship like vrat for acquiring something concrete materialistically. One can have a question as to what is appropriate, doing Adhidaivika-upaya or making worldly efforts ?

The difference between making worldly efforts for fulfilment of material desires and performing vrats for the same: While making worldly efforts for the fulfilment of material desires the person gets trapped in vices. He loses his basic sattvik temperament. By performing vrats, that is, by taking the course of Adhidaivika-upaya he is able to fulfil his desires maintaining his sattvik temperament.

Our Sages undertook the vrats and themselves experienced the spiritual science underlying them. They elucidated the vrats to the society so that it derives benefit from the vrats.

In this context, benefits derived by some devotees, from Maharashtra and Goa, after performing Sankashtachaturthi vrat is given below:

“We are observing Sankashti vrat for the last five years and benefitting from it. Life has become stable. My son gets good marks. He also got admission for further studies.” – Mr. and Mrs. Verma ji, Navi Mumbai

“When I was studying, my parents told me that by worshipping the Deity one acquires good intellect, one’s studies go well and one remains in good company. They also told me how to perform the Sankashti vrat. With the faith that everything is going on smoothly in life by God’s grace, I took up this vrat.” – Mr. Santosh Gurav, Raigad

“In our class everyone found the Secretarial Practice paper very difficult. On the day of the examination of this subject, I went to Shri Ganeshji’s temple and narrated my concerns. That day I was able to answer the entire paper and scored good marks in the subject. Since then I have been observing this fast. The state of all of us was alike. By praying to Shri Ganeshji, the Secretarial Practice exam becomes easy, that is why we observe a fast too.” – One student

Through these spiritual experiences one understand that by observing the Sankashtachaturthi vrat the wishes of the devotees are fulfilled.

of the wishes by observing the Sankashtachaturthi vrat

By ritualistically worshipping Shri Ganeshji, the Ganesh Principle gets activated. Also, Ganeshji’s Riddhi and Siddhi Shakti or Energy get activated. In reality amongst these Principles, the wishes are understood by Riddhi and fulfilled by Siddhi.

Difference between Riddhi and Siddhi:

By ritualistically worshipping Shri Ganeshji, the Ganesh Principle gets activated. Also, Ganeshji’s Riddhi and Siddhi Shakti get activated. Amongst these Principles, the wishes are understood by Riddhi and completed by Siddhi. By the ritualistic worship of Shri Ganeshji, through the medium of these two Energy Principles, the desired wish of the one observing the vrat is fulfilled. Due to the combined function of the two Energies, the result, that is, wish fulfilment is acquired. That is why the collective noun ‘Riddhi-Siddhi’ is used for these two Energies.

On the day of Sankashtachaturthi, Shri Ganapati Atharvashirsha is recited. Sage Ganaka wrote the Atharvashirsha, that is why it has His resolve. Due to the Energy of the mantra of Atharvashirsha, Divinity is awakened in Shri Ganeshji’s idol.

After consecration of the idol by sprinkling water, various types of leaves are offered to Shri Ganeshji, also known as Patra-puja. In this sacred grass (Durva) is also offered.

The subtle effects of the ritualistic worship with leaves (Patra-puja): Through the Durva and other leaves, the worshipper’s body is touched by Ganeshji’s activated Principle. Also, a protective sheath of this Principle is formed around his body.

4. The importance of ritualistically

Moon is the symbol of activation of Energy of Desire (Icchha-shakti). The importance of ritualistically worshipping the moon is 70 %.

Why is arghya offered after Chandrapujan in the Sankashtachaturthi Vratapujan?: By the action of offering arghya after the worship, one becomes conscious of discarding ego. He gains full benefit of this action at spiritual level.

offering modak and money to the priest

In order to absolve onerself of some mistake in the action of the Deity’s worship or an act of sin that might have happened inadvertently, modak and money are offered to a priest.

6. Importance of making a resolve

of conclusion after the ritualistic worship

In the ritual of Udyapan of the Sankashtachaturthi vrat, the Deities of the nine planets, the seven Sages and Brahma etc. are worshipped. Shri Ganeshji is consecrated with water and offered purnahuti. Mahanaivedya, that is, the meal is offered. The meal is partaken at night at the time of Moon rise and the next day, a priest and a married woman are served meals.

7.1 Effects of installation of the ritualistic metal pot (kalash)

In the Udyapan ritual of the Sankashtachaturthi vrat, a kalash is installed on wheat to offer a seat to the Deities. Pouring water in it, Mango leaves are kept in it. Some rice is kept in a copper platter.

In the Udyapan ritual of the Sankashtachaturthi vrat, the Deities of the nine planets, seven Sages and Lord Brahma etc. are worshipped followed by Shri Ganeshji.

After performing rituals like padya, that is, washing feet, arghya etc. the idol of Shri Ganeshji is consecrated with water. During consecration, the sattvikta of the idol increases by the touch of the water. Beaded cotton (vastra) is offered. The frequencies of the Principle of Shri Ganeshji emanating from the idol are absorbed in the vastra, which benefits the worshipper. With the offering of turmeric powder, vermilion and Durva, 2 percent Ganesh Principle is attracted in the idol.

7.3 Effects of utterance of mantras by the priest

When the priests utter mantras in the Udyapan ritual of the Sankashtachaturthi vrat:

By touching the worshipped kalash on the Adnya-chakra by the host, the sattvikta and coolness in the kalash is spread in the bodies of the host husband-wife through their Adnya-chakra.

7.5 Effects of sprinkling consecrated rice and

Holy water (tirtha) on the host husband-wife by the priest

In the Udyapan ritual of the Sankashtachaturthi vrat, the sacrificial fire (havan) is performed. Effects of the substances and performance of havan:

After giving the purnahuti, the flames of the fire become 10 percent more radiant. By performing havan in this manner:

After the purnahuti at the time of arati, the Ganesh Principle and the Lakshmi Principle are present in the environment. Similarly, the frequencies of Chaitanya and Anand are also spread in the environment. All the persons present there gain from the Udyapan ritual of the Sankashtachaturthi vrat performed with Bhav. Some people do the Sankashtachaturthi vrat for 4 years whereas some people for 13 years also. There are also the faithful persons who perform this vrat for life long.