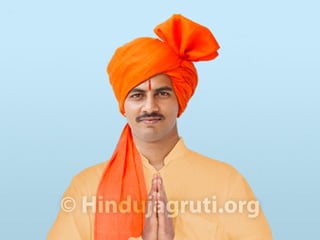 Hindu culture is enriched with Chaitanya (Divine consciousness). After studying various attires at the gross as well as the subtle levels, that is, by taking into consideration the spiritual perspective, Hindu Dharma has given importance to certain attires In this article, let us understand the importance of wearing a turban and its benefits.

2. Why did the custom of wearing a turban originate ?

In Kaliyug, human beings have begun to drift away from God and Dharma. Hence, the need was felt to create bhāv (Spiritual emotion) towards the karma (Action which gives rise to destiny) performed, and make them solemn about the karma for generating yearning towards God-realisation at least by using external means such as turban. It is out of this need that the custom of wearing a turban originated.

3. Importance of the turban and its benefits

3A. Method of wearing a turban helps in accumulation of sāttvik waves in the body

Easiest, simple and sāttvik method is to wrap a panchā (Towel) or washed cloth in a rounded manner around the head. Sāttvik vibrations of the universe congregate in the void created in the middle of the turban. This arrangement of the turban helps in augmentation of sāttvik vibrations within the body.

3B. The contact of the turban helps in development of pure intellect

3C. The turban increases the presence of kārya-shaktī (Energy of action) in the body

When the presence of the kārya-shaktī in the body is to be increased, one end of the turban is left hanging at the back. The contact of the turban cloth with the vertebrae helps in keeping the sushumnā-nādī (The central channel of the spiritual energy flow system, which extends from the base of the spine to the top of the head) in an awakened state.

3D. Subtle-waves of Divine Principle are imbibed by the turban, due to which the individual’s sthūldēha (Gross body), manodēha (Mental body), kāraṇdēha (Causal body) and mahākāraṇdēha (Supracausal body) are purified

The subtlest waves of the superior Deities present in the universe are attracted towards the turban, and through the Sahasrār-chakra (Notional opening situated at the crown of the head, which leads to realisation of Brahman and Shiv) of the individual, they spread all over the body of the individual and get activated. Similarly, because of the turban, subtle-waves of Principles of Deities that are sāttvik and Chaitanya-bestowing are imbibed. This leads to purification of the individuals’s sthūldēha (Gross body), manodēha (Mental body), kāraṇdēha (Causal body) and mahākāraṇdēha (Supracausal body) are purified; then, they become sāttvik and are enriched with Chaitanya. This in turn reduces the individual’s ego. Such a individual performs virtuous tasks effortlessly, and if the individual’s bhāv is above 30%, Deities function through it.

3E. A reddish orange sheath, which contains kshātra-shaktī (Energy of a warrior) and dnyan-shaktī, is created around the individual that wears a turban

3F. Emission of red waves from the turban and blue and orange waves from the lower round portion of the turban, which is beneficial for the individual who wears it and also to others around him.

4. Colours of the turban according to the objective 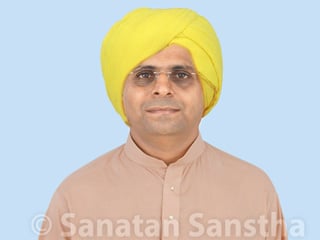 4A. Red colour for Kshātratēj (Radiance of a Kshatriya [warrior]): For emission of waves of Kshātratēj the turban should be red. Red colour is also conducive to protection against attacks from negative energies.

4B. Yellow colour for Brāhmatēj (Radiance of a Brāhmaṇ [One who belongs to the first of the four classes, studies scriptures and imparts knowledge to the society]): To spread Brahmatej in the society and to imbibe within self, the turban should be yellow in colour. Yellow colour is conducive for spiritual progress.

5. Using the turban as per the spiritual level

6. Turban and mundāsē (A small type of Turban)

In the earlier times, mundāsē (A white piece of cotton cloth) used to be wrapped around the head. This arrangement is excellent from the perspective of imbibing sāttvik waves, while the method of tying the turban with a plume at the top of the turban and the loose end hanging at the back is excellent for emitting positive waves from the folds of the turban. A turban has greater ability to emit positive waves, while wrapping a mundāsē around the head is good for imbibing positive waves.