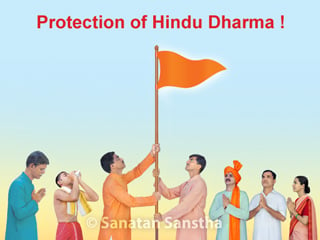 The objective of an ideal social structure is imbibing of virtues like loyalty unto Dharma (Righteousness) and Nation, being dutiful, morality, virtuous conduct etc., by the entire society. Dharma is an important component for attaining this objective; for, it is only on the support of Dharma that human beings flourish, meaning, upliftment of their materialistic and spiritual life takes place and they attain Moksha (Final Liberation). This article explains why to save Hinduism and importance of protecting Dharma.

1. History of Dharmarakshan (Protection of Dharma) 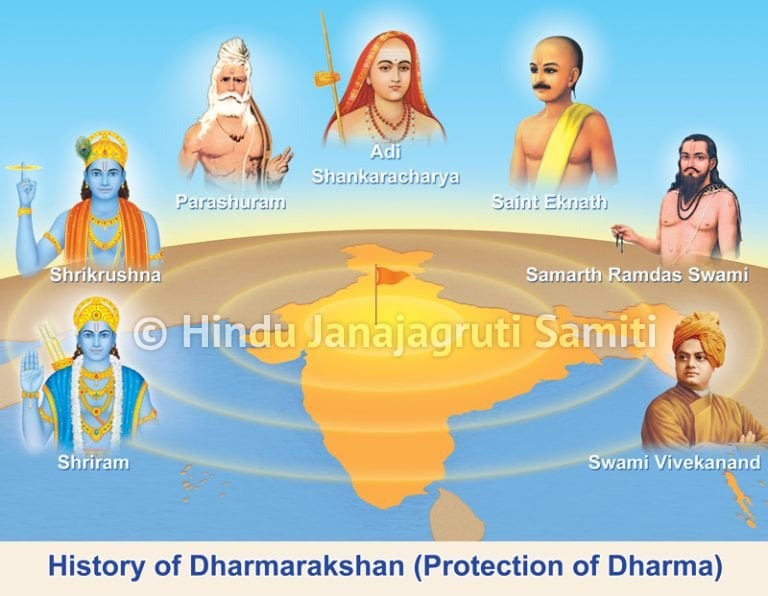 From Era to Era, God has repeatedly incarnated Himself, has destroyed demons which attacked ‘Sanatan Vedic Dharma’, meaning, ‘Hindu Dharma’ and has thereby set before us the ideals pertaining to protecting Dharma. Incarnations such as Shriram, Shrikrushṇa and Parashuram are especially well – known in this context.

From the 5th Century B.C., Buddhist philosophy became dominant. Subsequently, Adi Shankaracharya countered its ideology and re – established the superiority of Hindu Dharma.

A. From the spiritual perspective

B. From the perspective of national interest

Sanatan Dharma and only Sanatan Dharma is the very life of Bharat. The end of Sanatan Dharma will mark the end of Hindustan. Thereafter, any amount of politics or social reforms or even pouring the entire wealth of Deity Kuber (Treasurer of Deities) on each and every child of this country will prove to be futile.

C. Do this to protect Dharma and save Hinduism!

D. Common steps in the act of protecting Dharma

2. Establishing a Dharmarajya is our duty unto Dharma!

Most of us do not want the present system of governance that is fraught with a number of problems. Instead, we wish to have an ideal governance that will provide happiness, stability, peace and security. When we think of ideal governance, one example that immediately comes to our mind is Ramrajya (Shriram’s Kingdom). Many of us wonder, why should we not be destined to enjoy such a Ramrajya? If we strive in that direction, Ramrajya of the earlier time can descend on earth even today.