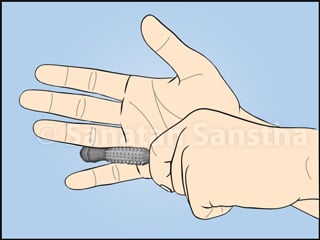 Chetana-shakti (Sentient energy) is also known as Prana-shakti (Energy that provides vitality), Jivan-shakti or Chaitanya-shakti (Energy of Divine consciousness). The chetana-shakti from the universe is present in the human body since birth. This energy controls the life of the individual. It is the cause of all actions and activities of the human being (for example, breathing, digestion of food, thinking etc.). This energy itself is known as ‘chetana’ or ‘prana’. In Chinese, prana is known as ‘chi’. When the chetana-shakti in the body reduces, the individual feels exhausted and gets distressed in various ways. There are some centres in the human body from where this energy can be obtained; these are known as ‘energy centres’. 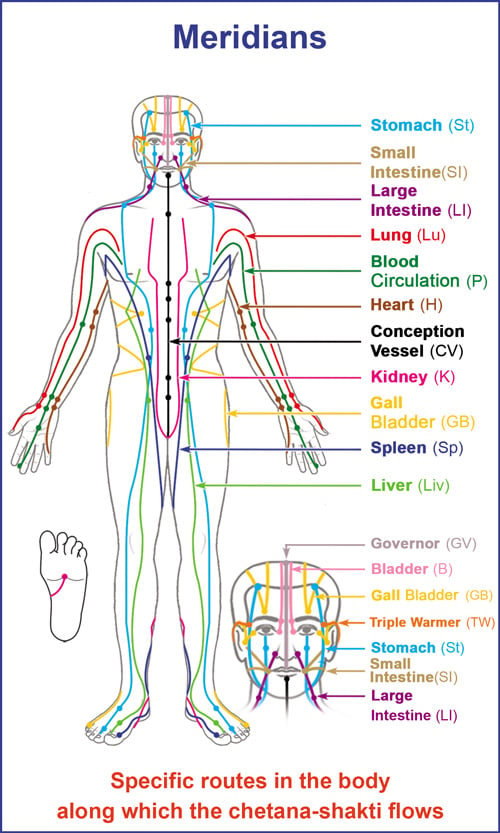 What is Positive (Yang) energy and Negative (Yin) energy ?

The chetana-shakti that human beings acquire from the sun is known as positive (Yang) energy. This body energy flow is from the finger tips to the face, and from the face to the feet of the individual.

The chetana-shakti that human beings acquire from the earth is known as negative (Yin) energy. This body energy flow is from the soles to the trunk, and from the upper trunk through the inner side of the hand to the palms.

in the body  along which the chetana-shakti flows

Chetana-shakti flows throughout the body along specific routes. These paths are known as meridians. In Chinese language they are known as Jing. In all, there are fourteen major meridians, of which twelve are symmetrical on the right and left sides of the body. Hence, both the streams of chetana-shakti flow (Body energy flow) in a similar manner throughout the body. Of the remaining two meridians, one runs along the middle of the back of the body and the other along the middle on the front side of the body. These meridians are associated with major organs in the body and the functions of these organs. The meridians associated with the major organs are known by the names of that organ. One end of each meridian is at a point in the hand, foot or face, and the other end is situated in a major organ.

Chetana-shakti is classified as ‘positive’ or ‘negative’ depending on its source and the direction of its flow. The Chinese synonyms are ‘Yang’ and ‘Yin’ respectively.

B. The governing meridians

The main meridians branch out and they spread throughout the body. (The body has seventy-two thousand naḍis.) Hence, functionally effective area of chetana-shakti flowing in the body is very wide.

C. The direction and order of the meridians

2. The timetable for the flow of

chetana-shakti through various organs in the body

A. Time during which sentient body energy flow (chetana-shakti) is optimum through specific organs, specific actions and the meridians.

Note 1 – Contraction of heart is an action

Note 2 – Triple heat is a meridian

4. Measures to be adopted when