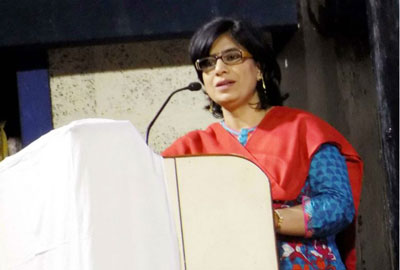 She said, “Today when I read the posters about this programme, I couldn’t control myself and I am here. While talking I may not be able to hold back my tears, so please try to understand me. My father was an honest, patriotic Police officer in J&K. He was never afraid although he received many threats from jihadi Muslims. He continued serving the Nation. As if this was his crime, one day, some Police officers brought home his dead body covered in a tri-colour. I was 7-years-old. We never knew what happened to him, but I still remember that day. My mother, who was very religious lady, just could not bear the sight and died immediately. That day, two funerals took place in our house and we lost our childhood.

Since my father was in the Police department, our relatives and Hindu neighbours did not want to take our responsibility. They feared that if they looked after the children of Policemen, jihadis would target them. We suffered in the bargain. Every day, we ate in different homes and tried to complete our education. One day when I was walking on a road, 2 young men came towards me and showed me weapons. They threatened me to either become a Muslim or leave Kashmir. I couldn’t say a word as I was terrified. After this incident, we left Kashmir and went to stay in Jammu. Whatever happened in my house also happened in other houses. Many lives were destroyed. Kashmiri Hindu women were physically abused. Kashmiri Hindus faced hardships that no other should ever face. I am ready to devote time for Ek Bharat Abhiyan”.