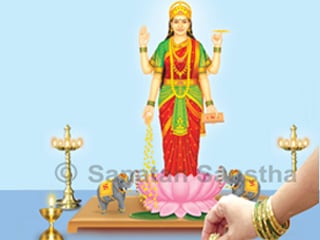 1. Importance of Amavasya during Dipavali

Normally Amavasya is considered inauspicious, but the Amavasya that comes in the Dipavali period is as benevolent and prosperity-bestowing as Kojagiri Pournima. During Dipavali the worship of Sri Mahalakshmi has been recommended. On Dipavali Amavasya Shri Lakshmi arrives in the house of gentlemen at midnight. The ritual of the worship of Shri Lakshmi is performed accompanied by wife.

2.1 Preperations for the worship

On the day of Dipavali, special preperations are made for Lakshmipujan as follows:

Invocation and worship of Shri Lakshmi and Deity Kubera:

Invocation and worship of Varun and other Deities: Due to the figure of ashtadala kamala, vibrations of Energy are generated at the venue and emitted in all directions. Thus the ashtadala kamala performs the task of a yantra.

Reason for consecration of Shri Lakshmi’s idol with water after the worship of Principles of various Deities established on the ashtadala kamala during Shri Lakshmipujan: By invoking the Deity during worship, the Nirgun Principle is attracted at the venue of the worship. The idol of the Deity is the Sagun form. By consecrating the idol with water, the Sagun Principle is activated. By placing the idol which is awakened by consecration, the touch of the venue to the idol continues. Due to this the Deity Principles which were invoked, keep spreading continuously in the idol. The frequencies of Deities’ Principles start emitting through the charged idol by which besides the worshipper the persons present at the place are also benefitted.

2.4 Substances included in the Holy sacrament of Shri Lakshmi

The substances like clove, cardamom, milk and sugar are included in the Holy sacrament to be offered to Devi in Shri Lakshmipujan. The function of each of the substances is different.

Hence, these substances are called ‘Trigunavatara’. They perform the important function of increasing or decreasing the proportion of the triguns in the person as per the need.

In the worship of Shri Lakshmidevi the sugar candy, paddy, jaggery and coriander seeds, that is, dhaniya are a must. Among them, the word ‘dhaniya’ is related to ‘dhana’, that is, wealth whereas paddy is related to prosperity.

Benefit gained from the substances used in Shri Lakshmipujan:

The subtle-effects of Lakshmipujan happen on both the husband and wife. However, for convenience we have shown the effect only on one person.

On Dipavali, besides the worshipper, the persons present also benefit from these five Principles. Similarly, there are some other benefits of the worship of Shri Lakshmi:

Apart from this, by worshipping Shri Lakshmi on the day of Dipavali the Benefit gained from Shri Lakshmipujan by the worshipper are:

Alakshmi means poverty, dearth and adversity. Elimination means to drive them out of our life. On the day of Lakshmipujan a new broom is bought. At midnight, the house is swept with this broom and the garbage is collected in a shovel and thrown out. It is considered as ‘Lakshmi’ and worshipped at midnight. Garbage signifies Alakshmi. The garbage is collected in a shovel and going out from the rear door of the house, it is thrown far away. After throwing away the garbage, the shovel is sounded in every corner of the house. On any other day, the house is not swept at midnight. The subtle process taking place at the time of throwing away the garbage is: